Posted On May 12, 2014 By Ascher Robbins In Sports, Sports Takes, Up For Debate

What Nobody is Saying About Michael Sam Getting Drafted

Before I start here, let me be clear: I’m an ardent supporter of gay rights. I believe that being gay is no more of a choice than being white, black, brown, or blue. I believe that gay people are absolute equals in society, and should be treated accordingly. I’ve voted in support of gay marriage every chance I’ve had. And perhaps most on-point, I believe that a gay football player is just as qualified to be in the NFL as a heterosexual player. And that brings us to Michael Sam.

As the NFL Draft rolled along this past weekend, I was frustrated to see the SEC Defensive Player of the Year continue to slide down the draftboard, all the way into the seventh round. Bill Polian and his ESPN cohorts tried to convince us that Sam’s precipitous Draft Day drop had nothing to do with his sexuality, but we all know that’s bullshit. Michael Sam had the talent to be a fourth round draft pick, not a seventh round afterthought. It almost seemed like someone had to draft the first openly gay football player in American history to avoid the scorn of the nation. And when the Rams selected Michael Sam with the 249th pick of the NFL Draft on Saturday, I was excited for him. I was happy for what his drafting meant for the NFL, and for American society as a whole. 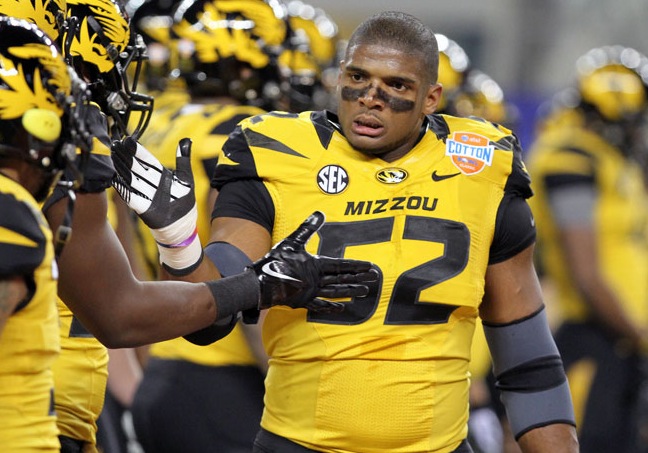 Without a doubt, Michael Sam’s inclusion in the NFL, even if only temporarily, represents a major step forward for our country, for practicing what we preach in the doctrine of “all men are created equal.” I don’t think the comparisons to Jackie Robinson and the inclusion of black men in professional sports were off base. This was a huge day for professional sports, and a huge day for really proving the tolerance and acceptance of our generation.

But when the ESPN cameras panned to Michael Sam and his boyfriend celebrating the news, I became a little uneasy. No, not because I’m a homophobe and can’t stand the sight of two men kissing. Good for them. Michael Sam shared a poignant moment with the man he loves, as he should have. No, I became uneasy because I knew what was coming. I knew that Michael Sam and his boyfriend were about to provide a veritable amory’s worth of ammunition to a large contingent of homophobes and right-wingers still present in America. To those who are uncomfortable with homosexuality, both within and outside of the NFL and its fanbase, Michael Sam’s celebration only further reinforced and alienated the millions of less-than-tolerant Americans who were already skeptical of the prospect of a gay football player.

For homosexuals to ever truly advance to the point of universal acceptance in this country, they need people to perceive gay men as men…not as gays. They need people to see them for, as Martin Luther King Jr famously uttered, “the content of their character” and in this case, not the gender of their bedfellows. And Michael Sam’s big moment did nothing to further this cause; on the contrary, Sam and his boyfriend made sure that their homosexuality was at the forefront, far ahead of Sam’s athletic prowess, and frankly, ahead of their very humanity.

What I found troubling was not the fact that Michael Sam decided to kiss his boyfriend. That alone would be fine, would humanize him and his story. But it didn’t stop there. The ESPN cameras came back to show Sam smashing cake into his boyfriend’s mouth, and then making out while eating the cake. To be frank, it was an infantile display that lacked both class and tact. If you missed it, check out the video below:

This has nothing to do with the fact that the kiss and cake-eating was shared between two males. If Johnny Football had eaten cake out of his girlfriend’s mouth, you can bet that the ESPN pundits would harp on his classlessness and immaturity. But actually, that scenario would have never happened in the first place, because Manziel and the rest of the draftees would have never done that, nor would the ESPN crew have covered such a moment. Gender and sexuality aside, it was a tacky, trashy move that was unbecoming for any 22-year old pseudo-adult, male or female, gay or straight.

But because gender and sexuality were intrinsically in play here, as ESPN covered the drafting of the first openly gay football player on national television, Michael Sam should have been much smarter. Whether he likes it or not, whether he wants it or not, Michael Sam is the de facto spokesman and poster boy for thousands of gay athletes, from middle school to the NFL. He had a chance to show everyone that gay or not, he was, above all else, a football player. Sam should have hugged his boyfriend, given him a kiss, and carried on with the business.

Yes, it was an emotional moment. Yes, he may have let his emotions get the better of him. But Sam had months to prepare for this moment, to orchestrate every detail to portray the homosexual community in the light most favorable. Yet, when the moment finally arrived, Sam blew it. His tactless, sophomoric display left scores of football fans feeling like the NFL is not truly ready for a gay athlete. Because, at the end of the day, Sam only enforced that label – that he is not an athlete, but above all else, a gay athlete.

Again, for anyone that judged Sam and his boyfriend, the problem lies with them and their unfounded biases. But make no mistake, Michael Sam hurt his cause a lot more than he helped it. Knowing that we’re still so far from being a universally tolerant society, knowing that he’ll have teammates that use the word “faggot” with frequency, and knowing that he had the perfect stage to portray homosexuality as normal and commonplace, Sam really dropped the ball.

Because of that, the world will always see Michael Sam the football player as Michael Sam the gay football player. And that perception will, undoubtedly, only make the issue of homosexuality in sports stand out, and ensure that the gay athletes that follow in Sam’s footsteps have a harder time integrating in the future.

The real victory for homosexuals will come when their sexual orientation is assimilated to the point that it no longer stands out, that it no longer requires discussion or exclusive camera footage and media coverage. But unfortunately, Michael Sam ensured that that day will not come for many more years.