Posted On September 17, 2014 By Basic Becca In Sports, Sports Takes

RGIII’s Statue is a Curse, Not a Blessing

Despite having graduated from Baylor University, I am not a big fan of RGIII. Yes, it is wonderful that our football program has gained attention and respect, and, yes, it is wonderful that Baylor Football has a Heisman Trophy winner on its resume. The athletic department has been gifted a brand new football stadium that is beautiful and right on the river as well as a statue of RGIII… yes, a statue of a man that has had a mediocre-at-best NFL career. I have an issue with this.

When I first heard news of the statue, my initial reaction was that he would be cursed as I think that statues of living people are ridiculous. Surprise- he had a potentially season ending injury this weekend in the home opener versus the Jacksonville Jaguars when he dislocated his ankle. The most interesting part of this all- the Redskins played better without him! That’s right- the magical RGIII, Heisman winner, enshrined on Baylor’s campus forever may not even need to recover in order for the Redskins to make the playoffs. They can do it without him as proven by Kirk Cousins. I’m sensing an Alex Smith/ Colin Kaepernick situation coming this season from the Redskins.

Perhaps I was right to assume the statue would be a curse, but why does it even exist? Robert Griffin III is young, he has a lot of life to live; there’s no telling what kind of man he will be in twenty years. What happens to Baylor if they’re stuck with a statue of someone with a lackluster NFL career? What happens if he ends up in the news for a situation that changes our perception of him? What if he ends up being a benchwarmer from this day forward? Regardless of where he ends up or how this injury affects his career, he is not the one that chose to have a bronze statue of himself placed on Baylor’s campus forever.

The issue I have is with my alma mater. Baylor is a well-respected, Baptist university that has been around longer than the state of Texas. It has longstanding values and traditions, and the people who have been honored with statues on our campus mean a great deal to the school and the community. The only other athletes that have a statue on campus are part of the Immortal Ten: ten members of the Baylor community that died in a bus accident in 1927. They’re honored every year during Homecoming, and their story is a big part of Baylor’s history. Does RGIII belong in the company of those men and women as well as Judge R.E.B. Baylor, the university’s namesake, and Rufus Burleson who established a coeducation policy allowing men and women to study amongst one another? I think not.

Another flag on the play for Baylor: students are required to take two religion courses and two semesters of chapel in order to graduate. In Christian Scriptures, the Bible is used as a textbook. The Ten Commandments are in the Bible, and the second commandment tells readers to steer clear of idolatry. So maybe don’t build statues of football players and put them on the campus.

My advice to Robert Griffin III- ask Baylor to put the statue in storage until you die, focus on your recovery, encourage and mentor Kirk Cousins as he sweeps in and excels at being the starting quarterback for the Washington Redskins.

My advice to Baylor University- get rid of the statue, if you must have a statue- make a statue of Art Briles in ten to fifteen years, believe in our football program enough to know that we will have greater players than RGIII. 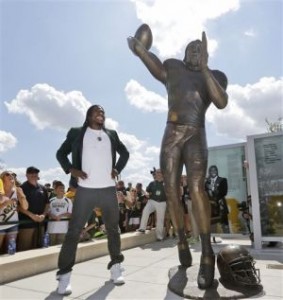