Posted On June 23, 2015 By Ascher Robbins In Artist Interviews, Music

The Hi-Dive in Denver, Colorado is quiet as the opening band packs up their own equipment and exits the stage. A quiet electricity hangs in the air; the sounds of clanking classes and friendly conversation replacing the music that was just being played.

In the small, standing-room-only venue, you won’t find any top-40 artists or teenaged fanboys and girls waiting around to meet their idols.The Hi-Dive is a bar, and half of the patrons are just there to drink a few beers and check out whatever artists happen to be performing that night.

But the other half of the crowd is there for John Moreland.

After a few subdued minutes, the sea of fans flock to allow the man to make his way from the back of the venue to the stage. John, carrying his guitar and a Trader Joe’s bag, climbs the two steps to the stage and begins to set up. Moreland is DIY through and through, evidenced every bit as much by his self-produced albums as his humble appearance.

A large man covered in tattoos, most people wouldn’t assume that John Moreland is a musician, much less one of the most critically acclaimed songwriters of our generation.

But as soon as Moreland starts to sing and strum out the first few chords of  “Blacklist,” the doubts of the uninitiated are quelled. By the end of the night, the entire crowd at the Hi-Dive will be John Moreland devotees.

Shortly before his show in Denver, I was able to catch up with the talented Oklahoman singer/songwriter to discuss his new album, High on Tulsa Heat, and much more. Here’s what he had to say.

Ascher: So you’ve been on tour for ‘High on Tulsa Heat’ for a few weeks now. How has the reception been to the new songs being played live? Has it been any different from previous tours?


John Moreland:  The new songs have been going over really well I think. I was kinda nervous to play them at first cause I hadn’t really played them since I made the record. It’s kinda weird playing songs that I’ve played a million times and then following them up with these songs I’m still a little shaky on. But people seem to be into it, it’s been great.

Ascher: ‘High on Tulsa Heat’ was self-produced. How does producing your own record allow you to take creative liberties and really shape it into what you want it to be?


John Moreland: I think the biggest thing is that I like having some time to breathe; to sort of work on it for a few days, then live with it for a while and see what holds up and what doesn’t. You don’t necessarily get that when you’re paying by the hour or by the day, when it’s like “we have this much money so let’s get in there and get this done.” It’s nice not to have to worry about that.

Ascher: I read that you said this album represented the first time you really felt pressure while recording an album. Your last album was so critically acclaimed, and everyone knows what to expect from a John Moreland record now, so that element of surprise is gone, and there are expectations. How did that affect the recording process? Did it help things turn out even better?


John Moreland: If there was a positive thing about feeling that pressure, I guess it’s that it really made me pay extra attention and make sure each song was the best that I could make it. But I really just try to put that stuff out of my head; that’s no way to make art when you’re in that mindset.

But yeah, before my last record nobody knew who I was – there’s definitely a freedom to that which I just don’t have anymore.

Ascher: With this album you did a PledgeMusic campaign where fans could help fund your record. How did you think that went over, and what do you think it meant to you and the fans?


John Moreland: It was really rad. I’ve always resisted doing one of those things, even when it would have been helpful in the past – I just really didn’t want to do it. But with this record it was like “the only way this thing is gonna happen is if I do it this way.”

I was blown away, though. It got funded in like 2 days, and that meant a whole lot to me. I’ve always been scared of the crowdfunding approach cause I had this fear in the back of my mind, like, what if I raise 12 bucks? Great, everybody hates me.

But yeah, it turned out great and it meant a lot to me.

Ascher: So tell me a little bit about the music video for “Cherokee.” It really adds some gravity to the song and complements it so well. How did that all come about?


John Moreland: Man, I can’t really take any credit for that at all. That was all Joey Kneiser. He came up with the idea for the video and directed it and edited it…everything. I think he said he got the idea from a short story that he read about this old Southern tradition of building your own coffin.

I stay at his house when I’m in Nashville usually, and one day we were just hanging out and he’s like “Hey man, I wanna make a video for that song,” and explained it in all that detail. And I was like “Cool man, sounds like I don’t have to be in it, so go for it!” I didn’t see it ’til it was done, but I was thrilled with it. They did an awesome job.

Ascher: Your songs are very personal. As you continue to gain popularity, as people start to really know your music, is it kind of weird to have these really personal songs get interpreted and repurposed by people to fit their own lives and feelings?


John Moreland:  I don’t think it’s weird; I think it’s cool. That’s what I make the music for. I guess it can be a little weird to hear somebody’s interpretation of a song when I know that’s not what I was thinking at all…but like, I’m not gonna tell that to them and ruin it for them (laughs).

I love that about music, though: it can mean whatever somebody wants it to mean.

Ascher: You have a very diverse background in music. You started out in the punk and metal scenes, and now you’re mostly doing the stripped-down acoustic stuff. Who do you look to for inspiration today, musically?


John Moreland: Well, I don’t know – I don’t really look to anyone for inspiration when I’m writing these days. I used to listen to stuff like The Band or Randy Newman or Townes Van Zandt – I mean, I still listen to all those guys on a regular basis, but I used to listen to those kind of artists and be like “Yeah, I want to write something like that.”  But I don’t really do that much anymore. I try not to think about it, I try to do my own thing.

Hell, this tour we’ve been listening to some weird shit, like Michael McDonald and the Full House theme song (laughs). I have weird taste sometimes.

Ascher: Yeah, I always kinda thought your music had a lot in common with the Full House theme song.


John Moreland: Yeah! It’s a great song, man. I like the shoo-ba-dee-bop-bow stuff. 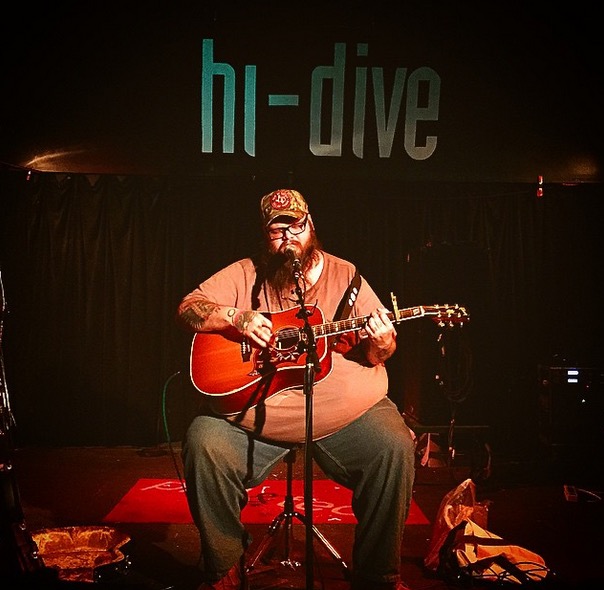 John Moreland performs at the Hi-Dive in Denver, Colorado on May 8th, 2015.

Ascher: So with your songwriting process, is it more something poignant happens and you write, or are you just writing all the time?


John Moreland:  Yeah, I write pretty much all the time…well that’s not true. I write little lines and couplets all the time. But that’s not writing really, I’m always just gathering little ideas. Then sometimes when I’m alone for awhile and have some time I’ll take all that stuff and turn it into songs.

But yeah, most of my songs start from an experience in my actual life. It’s almost never an immediate reaction, though. It’s like, something happens and then later on, after I have some perspective, I’ll write about it. Most of the songs I write are about things that happened in my life like, a couple years ago.

I don’t know why that’s easier, but when I try to write stuff when I’m going through it, when I’m wrapped up in that emotion, the song fuckin’ sucks usually. When I’m writing about the past it’s like writing about a character, but that character is me.

Ascher: How would you label or characterize your music? It doesn’t really fit neatly into one genre.


John Moreland: Definitely. When we’re on tour, like, if we’re in a gas station or a hotel or something and someone asks if we’re musicians, I’ll be like “We play rock n’ roll, man.”

I try to not explain it if I can get around it. Sometimes I’ll say folk. But it’s funny. Sometimes – usually on Twitter – someone will tag me in something and be like “this is some real country music!” I’ll be like “Um, no, man. Hank Williams is real country music. That’s not what I’m doing at all.”

But hey, if they like my music, they can call it whatever they want.


John Moreland: Hell, I don’t know man. I just want to keep playing more shows and keep on making more records. I try not to overthink it.

Ascher: You’ve said that a major theme on the album is about “searching for a home.” What exactly does that mean to you?


John Moreland:  The best way I can describe it is by this conversation I had with my buddy Max Porter in San Francisco the other day. He grew up in Oklahoma near where I did and he’s living out in the Bay Area, and his landlord is kicking him out.

We were having this conversation about where he’s gonna go and what he’s gonna do. It turned into this thing where we both were like “I don’t even wanna live anywhere.” I can’t think of anywhere I like well enough to stay put. I think it’s a symptom of touring. The other night we were driving around Seattle and we loved it there. But when you’ve toured long enough, it’s like – you’ve seen everything and everywhere and for me it’s really…put me in my bed. I don’t care where.

It’s not that I’m jaded and like “everywhere sucks!” but it’s really that, on some level, everywhere is just another place.

Ascher: Despite not having a permanent home, you’re from Oklahoma and it’s definitely a major part of you and your music. How does it affect your art?

And really, that’s how I’ve always felt as a person. I think that’s at the core of why I write songs – like, why do I feel out of place? My music is trying to figure that out; to find a place I fit.

Check out “Cherokee” from John Moreland’s High on Tulsa Heat below.

You can buy the album here!