Posted On December 15, 2014 By Basic Becca In Food and Drink For Women, Girlzone

Like it or not, alcohol and pie are two staples of American gatherings, especially those involving family. Whiskey is often thought of as a “man’s drink,” and women who fraternize with such strong beverages are revered by less bold onlookers. The truth is, whiskey is an everyone drink, especially when it’s pie-flavored. That’s right, the geniuses at Piehole have blessed us with Apple Pie, Cherry Pie, and Pecan Pie flavored whiskey, and I have been lucky enough to try all three.

When challenged with creating my own recipe using Piehole Whiskey, I spent a few days experimenting with the pie flavored whiskeys and unconventional ingredients that were sent to me. Some of my creations were straight up vomitous, but most of them were delicious. The true challenge came in selecting the winner and giving it the perfect name. The final battle had been set: Cran-Cherry Icee vs. Cider and Spice shot. Ultimately, the Cider and Spice Shot was equally delicious and easy to make whereas its opponent was also delicious but required quite a bit of effort. When I want a drink, I want it instantly– I don’t want to pull out my blender and search for fifteen ingredients. Alas, the Cider and Spice Shot reigned supreme. 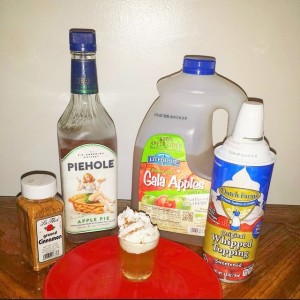 Praise for the Cider and Spice Shot:

“I don’t know. Apples? It tastes like I stuck my face in an apple pie.” -Sous Chef/ Taste Tester/ Boyfriend

“I love it because it’s not one of those shots that makes you barf a little after you take it. It actually tastes good.” -Me

Drink responsibly and don’t be an idiot.