Posted On July 15, 2014 By Shannon Folsom In Lifestyle, Miscellaneous

Hello my name is Shannon. Professionals tell me that I suffer from both generalized anxiety disorder and depression. I used to be pretty pissed off about that, until I realized that, “you have a mental illness” is actually code for, “the universe is turning your life into a comedy.”
Here’s what that comedy consists of:

I like to think the way I gulp air and struggle to breathe while I’m experiencing a panic attack is somehow cute and endearing. In my mind, I look like I’m practicing casual diaphragmatic breathing. In reality, everyone around me is wondering if I’m choking to death or preparing to blow chunks.
My first real panic attack was a glorious experience that later resulted in a misdiagnosis of acid reflux disease (shout-out to my university’s top-notch health center). I remember sitting alone in my college dorm room one evening, ruminating over something incredibly trivial, and being completely blindsided by panic, chest pain, shakiness, and sweat.

Convinced that I was dying, I called my primary care doctor and reached an on-call nurse who encouraged me to get a hold of an ambulance.

Instead, I called a friend of mine and opened with something like, “Bro, I’ve got Rice Krispies in my chest and I’m pretty sure I’m about to croak. Can you either come here and watch me die or take me to the ER?” Luckily, he was willing to do the latter, and dropped what he was doing to come pull my sweaty, pathetic ass off the floor and drive me to the hospital, where I was assured that I was not having a heart attack and would probably live to see the next day (Pretty sure I told my friend he could take my dorm TV if I didn’t make it though). 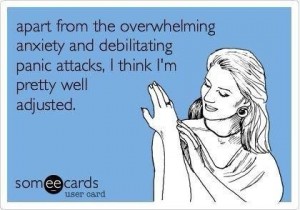 My brain operates so rationally during periods of extreme anxiety.
What better way to deal with stress than to get stressed about being stressed, which in turn, leaves me unable to accomplish anything, which leaves me feeling like a worthless POS, which I’ll probably always be, which is REALLY stressful to think about.
Meanwhile, my friends are just trying to figure out how I could possibly have zero free time but still manage to spend hours staring at a blank computer screen every day. MY BRAIN IS DOING A LOT OF WORK, K GUYS?!

And then there’s this debilitating struggle, which Ryan Pequin of Three Word Phrase illustrates all too well: 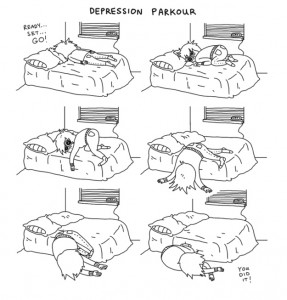 Usually it coincides with an internal dialogue that sounds something like, “Get up. Do you realize there are people out there with real problems like cancer and dead pets that are functioning like normal f*cking humans?….Why are you crying? Pussy. Pull your shit together and go get some food or something. Ready dumbass?…1,2,3 ROLL!”

And then, once I’m finally out of bed, that asshole mind of mine hits me with something like: 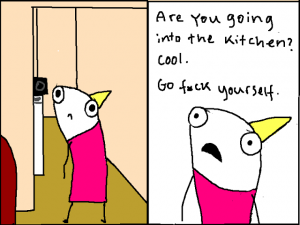 …and I’m back where I started.

Talking to a therapist:

Again, I’d like to take a second to acknowledge the fine institution that is Campus Health. During my junior year, I experienced one bout of depression that was lengthy and uncomfortable enough to cause me to contact my university’s counseling center. Until this point, I’d managed my “issues” with Prozac alone, but decided that I was too good for drugs and needed to sort things out with a human instead. So, my first counseling experience went something like this:

Flamboyant, Skinny-Jean Therapy Man: “So why are you here today?”

Me: “I feel like shit. I’ve felt like shit for days. I can’t do anything but lay in my bed and I’m not getting anything done. ”

Therapy Man: “Why is that? Is something upsetting going on in your life?”

Me: “I mean yeah. This is pretty upsetting. But nothing caused it. I just can’t do anything. I sit around feeling nothing and leaking from my eyeballs and when I try to get off my ass and go to the gym or do homework, my mind is like, ‘Nope. Go back to your room, you little piece of shit. You’re not going anywhere.’”

Therapy Man: “And how is this making you feel?”

Therapy Man: *blank stare—absolutely doesn’t catch the reference* “Well, how can we resolve this?”

Me: “I was kind of hoping you would tell me that. I’ve tried medicating myself with food and listening to Destiny’s Child’s “Survivor” on repeat, but apparently that’s not the answer.”

Doctor Derp: “Do those seem like healthy ways for you to cope with your problems?”

And so, after about 30 minutes of touchy-feely bullshit, I left the counseling center in tears, only to discover a $25 parking ticket on my windshield, because when it rains it friggin pours.
Moral of the story: There are plenty of professionals out there that can help you through your depression, but you might not find them at your university’s health center.
Also: Campus PD doesn’t give a shit about your mental health.
Also: I’m too sarcastic for my own good.

Realizing that some of the world’s most badass people are effed up as well:

Do you understand how many of the world’s funniest and most creative people suffer from mental illness?!

David Letterman? Anxiety and depression. Drew Carey? Depression. Louis C.K.? Depression. Allie Brosh, the genius woman behind Hyperbole and a Half? Depression, man. These people aren’t crazy, but they’ve had to tell their brains to calm the eff down a few times. And they’ve learned to use humor to change their mindsets and entertain the masses. Which leads me to this realization…

Because when it comes down to it, my issues are part of what make me the person I am. Dealing with this GAD/depression bullshit has taught me a lot about both my limits and my capabilities. It’s also turned me into a bit of an amateur, part-time comedian. Granted, not everyone enjoys my semi-morbid and incredibly politically incorrect sense of humor, and a few of my friends are probably more embarrassed than entertained by public displays of f*cklessness, but I’ve learned how to puke up sunshine and rainbows in order to see myself out of very dark places. And that’s a lesson that everyone could use to learn.

So here’s to you, mental illness: You’re a total prick douchebag, but you can’t hold me back. I’m learning to deal with your negativity and fight back with humor and invincibility because you know what? 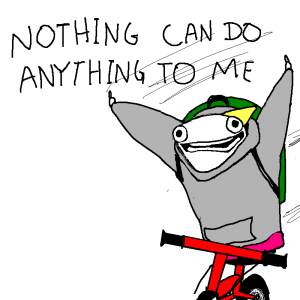