Posted On June 20, 2014 By Matthew Walsh In Lifestyle, Manzone

Born to Run: My First (Half) Marathon

I ran the San Diego Rock n’ Roll Half Marathon a couple weekends ago. My training leading up to it was spotty (at best). The foundation of my diet was ice cream and red meat. Having grown up an athlete—not a good athlete, but an accomplished try-hard—I assumed running thirteen miles would be a walk in the park.

I was so wrong. Because we only walked for a few minutes in the proverbial park, and then had to keep running. I will now recount for you my first half-marathon—and possibly my last.

Now, my girlfriend, having done this kind of stuff before, did her best to motivate me to do things “correctly.” However, I saw it as her wanting me to do things “her way” and I wanted to do things “my way.” My way being the least amount of work possible for the most desirable outcome, and her way being something along the lines of “hard work gets results.” I’d liken my efforts in the endeavor to riding a helicopter to the top of Mt. Everest, or riding a Segway from the bulls in Pamplona.

Instead of coming to terms with her knowing more than me, I made the grave decision to let race day decide whose method of preparation would better triumph over the thirteen-mile run.

At the crack of dawn my girlfriend and I arrived at Balboa Park in beautiful San Diego with thousands of other runners. One by one, the racers moved ever forward to the start line. All of them full of cheer and gusto, ready to embark on a journey rife with sweat, ache, Gatorade, and in some cases, weak bladders.

With the blare of a siren, my corral sped off into the unknown known. I was going to take this one step at a time. I’d show my girlfriend my athleticism, and then bathe in the sweet victory of her lamentation. I ran, and I ran, and my naivety let me lie to myself: “This is gonna go great!” Ignorance kept my mind far, far away from what was to come. It kept me positive, positivity kept me moving, even when the sweat broke over my brow and the furious San Diego sun broke free from the clouds and beat down onto my ghostlike flesh.

I remained steadfast in pace until we passed by a sign that read “mile 3.” I turned to my girlfriend and asked her “how it was possible to have only gone three miles?” She, as per usual, just smiled, then said, “We’re doing great!” and maintained her composure. I wish I could have said the same for myself. I was deteriorating. This was only the beginning of both the race and my self-mutilation. Yet, I pushed myself onward.

After a slow, steady, climb into the surrounding hilly neighborhood, things started to go downhill literally and figuratively—yes, we started running downhill. An epiphany in regards to my physical state washed over me. I was in shambles. My knees ached, my feet burned, all of my clothing pregnant with perspiration. Thirteen miles was not easy, because I had just run seven and thought myself on the brink of death. I needed a saving grace, something, just anything to keep me going a while longer, and as I turned the corner with my half-run-half-limp stride there stood a man in his front yard with a sign and a fold out table. The sign read: “Patrón shots!” My stomach churned at the thought. “Who in their right mind would drink tequila during their half-marathon!?” Not even a minute later another man with a yard, a sign, and a table. This time, “Jameson shots!” To which my response was something akin to, “who in their right mind would pass up on free whiskey during their half-marathon!?” I pulled two back with the kind-hearted man and caught up with my girlfriend.

The whiskey brought me back, and then took me full circle to where I was moments prior. I was like Popeye the Sailor if he were in the middle of chemotherapy. Now my stomach burned on top of everything else, and I had many miles left to go. I soldiered on, passing several of the marathon’s photographers as I hobbled in agony. Concerned for the mental well-being of the marathon photographers, I did nothing to mask my physical and emotional state. A smile in that moment would have been too great a juxtaposition to those and the world around me, a very contradiction to life itself. I had become death.

At mile ten, space and time became a single smear in my dehydrated brain. My focus came in and out with each step like the ocean’s tide. There was only the run and the ground beneath me. What lie before me no longer mattered, by in large because tunnel vision had set in and it was easier to stare down at the ground three feet ahead of me. My trance broke at the mark for mile eleven because my sweatlogged shirt began to chafe away at my delicate nipples. I remember bursting into inexplicable giggle fits and passing by fallen runners being treated by medical staff. Better to laugh than cry, I suppose.

The final stretch approached—mile twelve. Motivated more than ever to finish something on time, I found it within myself to run. Beaten, bloody (nipples), and exhausted beyond comprehension, I decided that today I would seize my victory. I would fight, and breathe wind into the sail of my sinking vessel. I would not crossover the finish line an old man eager to embrace death. Nor would I crawl like a newborn babe in search of the teat of first life. I would not cross that line a man at all.

Like, a Tyrannosaurus Rex, hungry, arms crooked and steps of thunder, I charged to the finish line with a heavy, unbalanced stride. Stepping under the “FINISHED!” banner and over the painted lines of the half-marathon’s end, I basked in the cheers and adulation of thousands. A heavy medal found itself over my head. Then I came to my senses and everything hurt again. The moving current of exhausted runners led me out of the finish area. Someone handed some chocolate milk, a bottle of water, and a banana.

I chugged the chocolate milk, downed the water, tossed the banana in the garbage, and was treated to breakfast with my girlfriend and her family. I ate a breakfast burrito, and it was good. Then everything hurt and I complained for hours, then everything hurt for a week after, and I became popular on the Internet for a day. 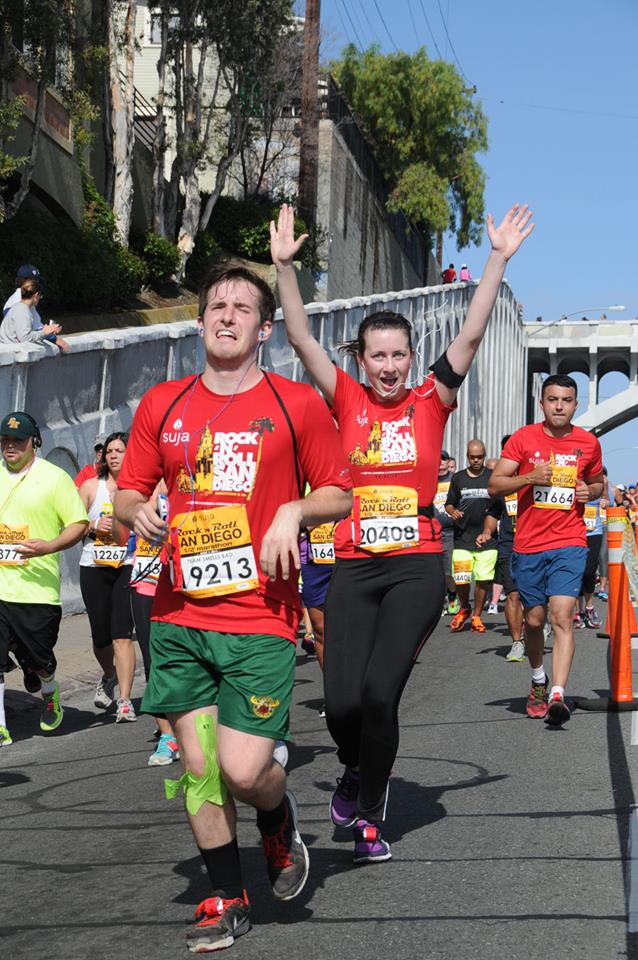