Posted On November 23, 2014 By Hunter Simmons In Movies

4 Reasons to Be Disappointed with Dumb and Dumber To

Twenty years removed from semi-cult glory, Jim Carrey and Jeff Daniels return with a lukewarm revival of the iconic characters Harry and Lloyd. The sequel fell in between modest attempt and doomed from the start, but my love of the original carried me through the entirety of the film. Unfortunately, there were several key moments that simply proved Harry and Lloyd’s idyllic, moronic behavior lost its pizzazz.

1. Carrey and Daniels lost their chemistry.

When living out the formative years of your life quoting every mannerism and facial expression of a comedy such as Dumb and Dumber, you expect any reference to a sequel or cameo to live up to the same standards initially set. In this case, age clearly caught up with Carrey and Daniels. Give them credit for running around for an hour and a half doing goofy, slapstick comedy, but the two seemed very out of sync with one another as they trampled through a shoddy plot line. 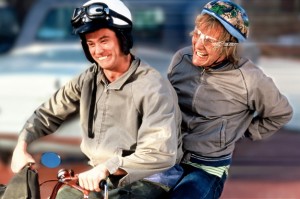 2. Daniels did not retain the same character from twenty years ago.

I have to give more attention to the regression of Jeff Daniels. Jim Carrey has proven himself a hyper hooligan time and time again, but it appeared that Daniels was struggling to shake his timbre from The Newsroom. Almost every exclamation Daniels had throughout the film felt very forced, and if anything, unnatural.

A movie riddled with outlandish, idiotic stunts may not appear to need any plot line whatsoever (a la Jackass). However, the Farrelly brothers lead the audience to about five or six different plot doorways, so to speak, before slamming each and every one of them in your face. It was difficult to make any meaningful attachment to the film, which reduced the unfolding events to schtick after schtick.

Without giving anything away, the ending came and went pretty timidly. It literally felt as if the Farrelly brothers realized they should not have done this in the first place and just decided to wrap things up in a sensical fashion, which sharply contrasted with everything else being offered in the first hour.

That said, the comedic dioramas got fairly hilarious on their own, and proper homage was paid to the original film to satisfy the super-fans. I would certainly not be at a loss if I never saw this film again. Time already expired on this sequel, and the twenty year gap makes the various mistakes glaringly obvious.