Posted On January 20, 2015 By Hunter Simmons In Movies

There has and always will be a lot of talk surrounding any film that attempts to paint a narrative of the United States’ armed engagements over the past decade or so. American Sniper is no exception. My problem? Everyone and their mother has something pretentiously groundbreaking to say about the goals of this film. There’s the, “Chris Kyle is an American hero and his efforts have been glorified with the help of Clint Eastwood,” contingency. Then, there’s the, “This film only points out the inevitable failure of the United States’ military incursions. War is bad!” conglomerate.

Do yourself a big favor: Stop making things all about you and try to enjoy terrific filmmaking. I’m getting really tired of the flame wars. You can mull over your own biases with your friends, who may be seriously reconsidering the validity of your friendship halfway through your ranting. 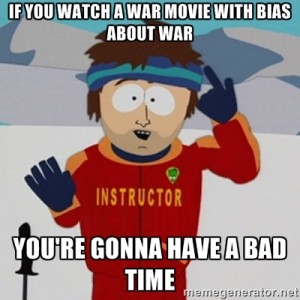 The big takeaway for me in this film is the fact that I can no longer question Bradley Cooper‘s performance ability and endurance. He was both physically and emotionally a powerhouse, and with the help of Eastwood, added another unique face to war movies that we’ll remember for quite some time. In addition, this movie received Oscar nods for film editing, sound editing, and sound mixing. This is no shock to anyone who has seen the film, who would likely tell you it felt like you were truly in the middle of the firefight and along for the ride throughout the film’s entirety.

For all the things that worked out tremendously, I could not help but take painful notice of some directorial shortcomings. This is to take nothing away from Eastwood’s accomplishment, but there were several moments that made me go, “Really…?” For example, there is a scene in which Chris Kyle is home from Iraq and he is having a rather emotional discussion with his wife (portrayed well by Sienna Miller). He picks up his infant child from her arms, and any viewer with decent vision could see that it was a doll. Seriously. No attempt made to cover that up. I’m sure infant actors run up a decent bill, but come on. Little things like that took some of the magic away from this film in the end. 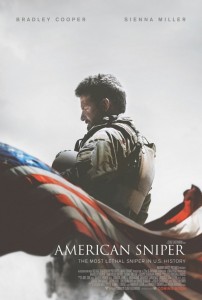 I reiterate here: I do not care what your thoughts are about the United States’ recent military history, and do not shove your rhetoric down our throats. Keep it to yourself, and we’ll all be much happier. This film will not win best picture, but definitely in my Top 5 of 2014.