Posted On May 19, 2014 By Anthony Kozlowski In Internet, Music, Music Musings

Does it seem like there’s been more and more commercial encroachment on your life?  It should.  The average American consumes about 11 hours and 52 minutes of media every day – a number that includes digital formats, radio, and print, as well as TV – up a staggering 66 minutes since 2010.  All that time gives advertisers more opportunities to take a stab at you, whether you’re relaxing in front of the boob tube, catching up on Hulu or reading articles on your favorite site (see: Writtalin).  We live under constant bombardment from marketing companies reaching for our wallet, and sadly we often feel obligated to dish them out.

That’s perhaps the strongest argument to check out producer Alan Wilkis’ latest musical endeavor, Big Data. Comprised of Wilkis and Joywave frontman Daniel Armbruster, Big Data is a concept duo obsessed with the hazards of the Internet age, including corporate advancement on user privacy and NSA surveillance.  You may have already heard the paranoid, bass-laden single “Dangerous” off their debut EP 1.0, which has been steadily gaining spins on alt radio since mid-February.  Like everything off 1.0, “Dangerous” weaves a nervous, Orwellian nightmare.  In a quivering voice, Armbruster sets the tone: “How could they know, how could they know / What I been thinking? / Like they’re right inside my head because they know.” 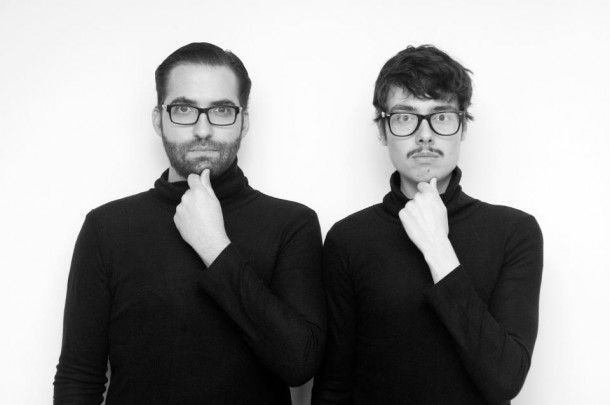 In case that picture wasn’t clear enough, the music video for “Dangerous,” drives their point home even further.  It plays like a Nike exec’s wet dream, complete with busty joggers, huge advertising deals and blood… lots and lots of blood.   The squeamish among you may want to take my word for it and just skip ahead.

While the premise is clearly outlandish – a prison scuffle becomes the spearhead of a shoe company’s ad campaign – the truth behind it is rather shocking.  Advertisers use what are known as appeals, angles that hint at basic human needs, to connect with the buying public.  These can range from appeals to emotion, sex, scarcity, desire for social acceptance, and basically anything to instill a psychological need in people to not only buy the product, but assimilate themselves into the brand.

The advent of social media has only exacerbated this process.  With the help of hashtags, viral marketers can now direct all discussion of their products online and develop a sense of community around them.  Because hashtags can be universally implemented on all social media outlets, advertisers no longer need to single out Facebook from Google+ users or determine if a significant portion of their demo uses Instagram.  In fact, 57% of Super Bowl ads mentioned hashtags this year, up from 50% in 2013 and setting a new record.  It’s no wonder the masterminds behind the Big Data Shoes ad campaign emphasize virality so much.

All in all, Wilkis and Armbruster hit the nail on the head with this glorious satire.  “Headbutt Your Way Through Life” is the campaign Nike always wanted to make, unabashedly appealing to both sex and aggression.  Wear these shoes, it says, and bloodlusting models will make out over a corpse.  On a base level, that’s all we really want and it’s why advertisers pay through the roof for primetime slots.  It’s an inescapable process, but at least some level of awareness can keep you from becoming psychological prey.  Beware those ads; they can be fucking dangerous.

You can download Big Data’s debut EP 1.0 right now on iTunes or listen to it on Soundcloud.