I recently went to Six Flags Magic Mountain with my brother-in-law on a whim. Upon walking through security by the entrance plaza, I saw a scene all-too-familiar within high capacity events: long bathroom lines.

Typically, the line for the men’s room is nothing to fret about. The line moves relatively quickly and one can get their business done without too much of a hassle. Popular culture has indicated to us that women use the restroom for much more than simple paperwork, if you catch my drift.

For women, the restroom is a social sphere. Gossip abounds and extra effort and attention is paid towards one’s appearance. Again, this is the stigma.

Feeling too impatient to wait at the clearly burdened bathrooms by the front entrance, my brother-in-law and I decided to migrate until we found a more suitable option. Towards the heart of the park, we found a restroom where the line for the men’s room was absent, while the women’s queue still extended beyond the doorway.

I pulled up to the first available urinal and began my systematic draining, when I heard some quick, light voices coming from just behind me. As I turned my head, I saw in a flash a mother-daughter duo scurrying into one of the available stalls, presumably to make an emergency deposit. Their voices were hushed, and it seemed as like they wanted to ensure no man had seen them slink their way in.

My immediate reaction was one of mild shock. “Wow,” I thought to myself, “I can’t believe they just came in here like that. I mean, they’re women!”

Then, I turned to pity. “What a shame that they have to put up with the foul, disenchanting ambiance that is a public men’s room.”

Finally, I settled towards ambivalence. “To each his (her) own. They’re not bothering me, so it’s not a big deal.”

At this point, I was an introverted participant of the current bathroom debate. Who should be allowed to use which restrooms?

My conservative ideological base dictates I should be outraged by all of this. We’ve heard the popular refrain, most recently opined by GOP presidential candidate Ted Cruz: “Grown adult men — strangers — should not be alone in a bathroom with little girls.”

The rebuttal is predictable. Fellow conservative S.E. Cupp (because I’m lazy and only collecting headlines from CNN today) asks, “What is to stop any man from walking into a public ladies’ room in the first place?”

So, I thought back to my own experience. What stands out is that these women were not using the men’s room out of identity. If anything, it was an emergency. (Or, they really really wanted to get to the X2 line as early as possible.)

But the fact remains, two women had walked in to the men’s room. Was I uncomfortable? No. Was I upset? No. So when considering the controversy around bathroom use, I do not see what all the fuss is about.

To be truthful, I get more uncomfortable when incredibly drunk people walk in to the bathroom of a restaurant or bar I am at. Their behavior is usually unpredictable and I stay on edge a little bit. I can only guess the same would be true for the women’s room. Otherwise, I personally do not understand the difficulty people are having with this.

Here’s a great example one of my students brought up in a debate earlier this year. Check out this picture of Aydian Dowling: 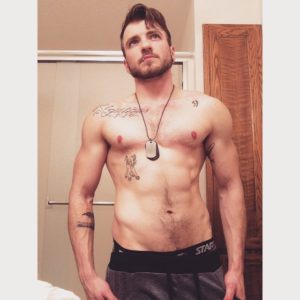 Any guesses as to which restroom he should use? I’m fairly confident you would say the men’s room. However, Aydian does not possess the boy parts many people require for men’s restroom usage. Now unless you required people to “spread ’em” before using the toilet, it doesn’t make too much sense to me why he should be restricted from using the men’s room.

But what about people that dress up somewhat like men but are clearly women, and vice versa? Look, if that person is looking at you funny, or says something that makes you uncomfortable, by all means report it. But if it’s their appearance that has set you off, you need to calm down.

However, I do draw a line.

Gender fluidity is one of these 21st century identifiers I cannot seem to get on board with yet. To say that you feel like a woman one minute, and a man the next, does not make sense to me. People caution not to criticize things you do not understand, but my biggest hang-up is that the research to support the validity of this new identifier is slim.

This all filters down to a tangent I don’t care to go into too much detail about on this page: create a third, genderless bathroom option. People complain about binary labels, so make a bathroom that is binary-less.

My progressive stance on basic bathroom use will be applauded. My views on more complex gender issues will be criticized. Neither of these will have a large impact on the fact that I can still stand and pee comfortably at the same time.