Posted On May 7, 2014 By Hilary Fitzgerald In Buzzworthy, The Scene

EnterViews: A Phone Call with Jessie of Meet My Rapist

You might have noticed Jessie Kahnweiler around the internet or even on the streets of LA. Or maybe you recognize this title—I Made a Short Film About My Rape and Now I Can’t Get Laid.

Last January in Park City I met Jessie in the offices of the Treasure Mountain Inn after having just seen her film and feeling overwhelmed by the collision of comedy and drama. She wore a fur coat while passing out red stickers with white font, “MEET MY RAPIST.” 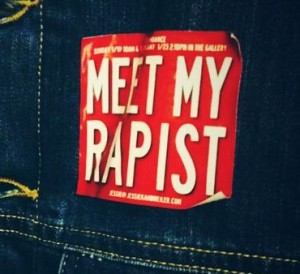 I wanted one (and I got three). I touted my sticker for the entirety of the Slamdance Film Festival (where Jessie’s film was an official selection) and received many concerned, even angry looks. I started to feel, maybe, what Jessie had been feeling.

Jessie’s short film Meet My Rapist follows the psychological struggle of a woman whose rapist is literally and/or metaphorically (you decide!) following her; weighing her down; interfering with her life.

The film, ingenious on its own, has in many ways kick started Jessie’s career as a filmmaker, writer, performer, and all around powerful lady. Before you continue, I highly suggest you watch it.

Last Monday, Jessie and I picked up our cell phones to have a conversation. Jessie’s ex-boyfriend and I are from the same area code. I learned this when I called and found an uncertain voice on the other end.

Jessie Kahnweiler (JK): Oh I was about to be like, I won’t pay you back!

After establishing Jessie did not in fact owe me money, we made it through the fake “How are you?” which she finds to be trivial.

We settled on “Tell me if you’re horrible,” and proceeded to discuss our current dating situations. The disconnect between mind and body.

HF: They can’t grab your arms.

JK: Their legs are the size of your arms…. You want what you want. One day you want the nice guys, so whatever, but that day isn’t today.

JK: Oh my god, today is the day I want a rabbi!

Jessie and I continued to have a conversation that I will not divulge, but can tell you these two sentences were said:

“Do you have a penis inside of you on a semi-regular basis?”

“You have no boundaries.”

But I won’t tell you who said what or in what order.

Let’s skip ahead to the questions I planned on asking.

HF: How do you pitch Meet My Rapist to people who know anything about it?

JK: I guess it depends on the type of person that I’m telling. I just met this 80 year old Persian dude at the coffee bean and he asked me to tell him about my movie and I said, “oh you know it’s about my past…” but with a lot of people I say it’s about running into my rapist at the farmers’ market.  Telling people about this movie, is a movie, it’s an art form itself, and I treat it like that. It’s awesome to gauge the reaction, not in a mocking way… it’s really helpful for me to see how people react to it.

HF: There are so many ways to look at the film, even in discussions I’ve had with people. Some say it “isn’t funny,” to which I say, maybe it isn’t supposed to be funny!

JK: I feel like the labels are not necessary in life. I never walk away from a relationship or conversation or dinner and say, “that was a comedy” or “that was a drama.” Life is so much more complex and rich, so why shouldn’t our cinema be? Why does it even matter! Let’s just take my rape—it makes me uncomfortable, but it also makes me strong and proud and it also makes me angry and it also makes me feel at peace! And when I meet other rape victims on the street, we high five about it. It’s not hilarious, it’s absurd, and that’s what I try to bring to my work. It’s beyond genre. There is not a moral authority on what you should think is funny or sad, I’m happy if you think anything, even if you fucking hate it!

HF: So, Meet My Rapist is really taking on a life of it’s own, it’s kind of crazy?!

JK: The play was really cool. She was a better me. It was very cool to see people make it theirs, make it personal. You know what makes me feel crazy? Living in a world where we don’t talk about the this stuff even though it’s so prevalent. Right now, I’m working on something with eating disorders, which is also something I dealt with. It’s hard talking about these taboo subjects that are so personal, where I’m left thinking, “How am I seen, are people going to think I’m crazy?” The real insanity is that we don’t talk about it, because that concludes to needless suffering.

HF: Right. I remember your story at the Gabba Gallery, regarding your bulimia.

JK: I’m doing a pilot right now, based on it. It’s nobody’s fault, but for me, having something (like bulimia) while also feeling I was a feminist or strong girl made me think “I’m not bulimic because I’m not Black Swan, I’m strong!” So there’s another layer of shame which says, I could never admit to this because I’m a feminist. I think a lot of girls have that pressure and that’s our story. And storytelling is the tool, it’s liberation and freedom.

HF: I loved your interview on Huffington Post Live…

JK: I guess I should’ve washed my hair!

HF: Any weird male attention since your article, “I Made a Short Film About My Rape and Now I Can’t Get Laid”?

JK: I’ve had the guys who are like, “Oh I went through suicide,” or “I was raped when I was younger let’s be together” or a lot of “Jesus is with me,” so I’m looking forward to meeting him. My article wasn’t meant to attack men or say men are bad. My point was that, unfortunately, it comes down to me. I wish I could blame my fucked up dating life on men, but it’s about me. I just have to do work on the inside, work on feeling sexy within myself… part of that is being honest with myself when I don’t feel sexy. That’s really getting real. For me, I’ll go hitch hike with truck drivers, but sitting on the couch and feeling feelings, that takes balls. So that’s what I’m working on—showing up for myself.

HF: I don’t want to sit around and harp on your film or your rape. I know you’re up to other stuff. Tell me about your web series Jessie Goes There. (First Episode: My Boyfriend is Homeless)

JK: My producer Jake Gillen…we’d been filming these little documentaries on race. I’m interested in how I don’t have boundaries, I love exploring social issues, class, race emotional and literal boundaries. The show focuses on that. Looking within myself and challenging my own notions. I’m sure liberal, but I would never date a homeless guy… that scares me. So that’s a good sign that I should do it. We’re playing with reality, pushing boundaries, it’s funny because it’s real!

HF: Do you feel you have to be a jack-of-all-trades, as an artist of the millennium?

JK: When I was coming up there was a lot of focus on getting good at one thing, know what you want, choose between comedy and documentary, or being behind the camera or in front of the camera. But the older I get, the more I don’t find that useful. I’m obsessed with telling stories. I thank God every day I’ve found something I love to do, but within that, it is my responsibility to create my own content. It’s the number one thing I have to do as an artist. For me it is first, how can I create more content, second, who do I need to enlist, and three, what is going to show my voice. Sometimes that is me acting, something it is me producing, sometimes it is getting someone to come in to write for me. I generally am a control freak, so I like to wear as many hats as possible, but I think that is both a freedom and a privilege. You have to be focused and work hard. I think it’s funny what people ask, “How do you do it?” you just do it.

HF: What about marketing, do you feel you have to brand yourself?

JK: I like doing it. It helps me. You can only do so much with marketing… it’s about how much you want to do. With branding, it is just making content. I don’t know what my brand is until I make stuff. You can think about it all you want, and this is going to sound cheesy, but my brand is… finding me. I didn’t realize I wanted to talk about all this stuff until I kept making movies and it kept coming up!

HF: Last question, where did you get your fur coat?

JK: At a garage sale in Denver. I love that that is a question.

HF: You were the fur coat girl in Park City!

JK: It didn’t get me laid though, now did it?

JK: That’s what I said. I don’t know what else I could’ve done.

Jessie’s work, like herself, is honest, challenging, and of course sometimes vulnerable, but that’s what makes it so powerful. I would advise you all to pay attention to what she has to offer.

All photos credited to Patrick Gookin.