Posted On May 22, 2017 By Anthony Kozlowski In Buzzworthy, Internet, Issues, The Scene

I would like to share something that happened to me on Facebook earlier this week, and no, it had nothing to do with cat videos or a political yelling match. Monday afternoon I came across this piece in Gizmodo. For the “too long, didn’t read” crowd, it is a case study in Facebook’s community standards. User Erin La Ninfa, who runs the blog “Just Another White Hoe,” created and posted the above image to Facebook to find that she and the friends who shared it were flagged and the image itself taken down. According to our great Zuckerbergian overlords, the phrase “men are trash” constitutes hate speech. Color me surprised.

Disclaimer: I think calling “men are trash” hate speech is itself a burning dumpster of trash, but we’ll get to that later. For now, just picture me baffled, angry, and a little curious. Surely this had to be a joke. A platform that allows anti-Semetism and rape threats somehow thinks men are the ones who need protecting? It was time for a little experiment.

I shared the Gizmodo article with the only appropriate, suitably tongue-in-cheek caption I could think of. “Men are trash.” Sweet, succinct, and obviously baiting. It wasn’t long before I started getting some nibbles.

That isn’t the surprising part though. As much as my friends love to air their grievances about the current administration, I tend to throw myself into feminist rants with equal ferver. I’m used to getting the angry retorts that boil down to “#notallmen” and “I don’t like this because I don’t understand it.” Sure enough, I got one or two of those by calling men trash. Par for the course, no big deal.

The kicker didn’t happen until the next day when I discovered I could no longer log into Facebook. I had been booted for violating Facebook’s community standards and locked out for twelve hours. Luckily I had slept through most of them, but that wasn’t the point. The fact that Facebook targeted speech against a systemically advantaged group while leaving other, more serious forms of bile up on their walls reveals a double standard in the way they police their community and a lack of social context in what they decide is too offensive to leave on our timelines.

Fear not, straight, white men. Your feelings are safe with us.

Before I go any further, I will often refer to men as a collective, but most of these issues are perpetuated by a particular – albeit large and ubiquitous – type of man, namely the straight and white variety. I happen to come very close to that mold – not quite, but close. For argument’s sake though, I’m talking about men like me, men that have enjoyed uninhibited lives at the top of society’s dogpile since Europeans first heaved their ships across the Atlantic.

Straight, white men aren’t automatically bad people, but there is a particular attitude that is present in nearly all spaces inhabited by us, which I refer to as the “trash attitude” or the “trashitude” for short (because I’m a loser who loves compound words). The “trashitude” is one that upholds a system of inequality toward less privileged groups. We could be talking about people of color, immigrants, or the poor, but in this case we’re referring to an entire half of our population – women.

Get the right person talking and you will hear all about the evils of feminism. You will learn about how the hateful rhetoric of feminists is counterproductive and divisive, how the wage gap doesn’t exist, how “rape culture” doesn’t describe modern society. Most of all, you’ll learn that they don’t consider themselves sexist.

To be fair, they are probably being honest. Many of the ways we treat women are so ingrained into the fabric of our society, they seem normal. “Double standards and casual misogyny have made sexism almost invisible,” writes Margie Warren of The Guardian. “Yet it’s still a barrier for many women and something we all need to confront.”

The problem is that many do not and make no effort to see the sexism that plagues women daily. According to the same Guardian piece, 63% of women feel sexism is still a huge obstacle for them, while only 41% of men feel the same. So why is there such a blind spot toward sexism at least as far as men are concerned? 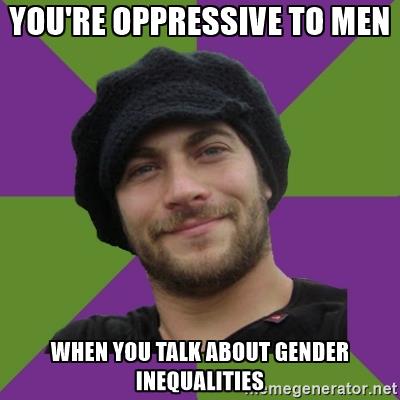 Laura Bates, creator of the Everyday Sexism Project, which collects and shares (you guessed it) instances of sexism that people experience in their day to day lives, recently opened up about what it was like getting the project off the ground. Between the graphic, detailed rape threats she received from internet users were what she calls “the slick, intelligent naysayers who hid in plain sight.” These are far more common, the men that say sexism is a thing of the past and that there are “real problems” to deal with. Yet catcalling, victim-blaming in sexual assault cases, and the shaming of assertive women in the professional world are still prevalent.

The blame doesn’t rest squarely on the shoulders of men, but it’s a system that benefits them the most. Take the Missoula rape scandal for example. Jon Krakouer paints those notorious events between 2008 and 2012 with a very fine brush in his book Missoula: Rape and Justice in a College Town, detailing not only the various alleged rapes, but also how the University of Montana, Missoula police department, court system, and the public let victims down every step of the way. In each case, a young male football star was the accused party, and in each case, he was given the benefit of the doubt. Whether it is soft-handed questioning by police, a refusal of prosecutors to bring a case, or football fans calling victims liars and attention-seekers, the cards are always stacked in the favor of a young man with “potential.”
If you caught the news when this scandal came to light, you might have been led to believe that rape in Montana was a statistical anomaly. Katie M. Baker did refer to it as America’s “Rape Capital” in her 2012 Jezebel piece after all. But that is far from the case. Missoula typifies the kind of rape statistics and legal procedure that can be found in our university system countrywide.

The 2015 documentary The Hunting Ground examines case studies from all over the US and comes to similar findings. The resources (at least until recently) available to victims of sexual assault have been minimal and ineffectual. Universities act to defend their image over their student population. It is seemingly in our institutions’ best interest to protect young men over the women they harm with impunity.

When at least one in five women are sexually assaulted in their lifetime, blind-eye statistics like this are more than concerning.

Rape is a horrible, life-changing act for everyone involved and seems to bring out the worst in our system of inequality, but it’s only the main course of what is meant by the term “rape culture.” In broad strokes, “rape culture” is everything that compounds to yield a situation like we saw in Missoula. It’s the normalization of predatory behavior – anything that affirms the idea that women are incidental to men’s actions. It’s what makes it possible to shrug off behavior with “boys will be boys,” while we interrogate women about dressing skimpily or getting too drunk. It’s what makes it possible for a presidential candidate to brag about “grabbing women by the pussy” and get elected. It is real and it is trash.
When women say “men are trash,” this is what they are talking about. And I know they don’t need another “straight,” white man to mansplain the harassment they experience either online or in their lives, but apparently the good folk at Facebook do.

This is important. Learn it. Know it. Teach it.

Men haven’t nearly endured the kind of marginalization that women have from pay inequality down to the small condescensions they receive every day. That is the crux by which Facebook’s double standard rears its stupid, ugly head. Rape threats, gendered insults, and sexist slurs hidden by the well-trodden “I’m not sexist, but…” remain up longer than my meager hours of “men are trash.” It seems that Facebook isn’t exempt from its own unconscious bias.

Before my post was taken down, I got into a bit of a heated argument with a friend who mimicked the comments sprinkled at the end of the Gizmodo piece. Saying “men are trash” is counterproductive, he claimed. It only perpetuates the hateful rhetoric we need to move away from.

Calling a man “trash” isn’t the same as sexist or racist slurs though. It doesn’t come painted with centuries of oppression that calling someone a “slut” does. Flipping the argument to tend to men’s feelings only detracts from the problem at hand, that women experience the “trashitutde” on a daily basis. To them, “men are trash” is a reality they live.

Dating a Feminist tweeted it best earlier this month:

Requiring the oppressed to only ever politely address injustice is a ploy to keep our voices too quiet to hear, and dismiss our loudness.

Before you start gnashing your teeth and stand up for the historically privileged, ask yourself where a sentence like “men are trash” comes from. More importantly, ask yourself why you feel so enraged by it. You may learn something about the ingrained misogyny you’ve taken for granted most of your life.
Personally, I’d like to live in a world where men aren’t trash, but that’s one I have yet to see. There’s a way to start cleaning it up though, and it starts one piece at a time.

Have you experienced the “trashitude” in your own life? Let us know how in the comments below.