Posted On June 27, 2014 By Jason William Spencer In Buzzworthy, The Scene

Life is full of moments.  Some stand out further than the rest.  Others stay hidden, to be discovered later on down the trail.  Today I had one of those rare special moments.  I had just got done being extra productive organizing and cleaning, which if you know me, that’s quite a triumph!  I was feeling accomplished.  I was feeling good.  Why not reward myself by watching all those movies I recorded on my DVR, but never got around to watching?  Fuck it.  Why not?  I was super productive today, I just got back from taking my dog Adonis to the vet, and well who doesn’t love a movie marathon?!  So which ones to knock out tonight.  Taken 2?  Why not.  Then Django Unchained?  Sure.  How about the last one for the evening?  As I flipped faster and faster, as movies flash by, I got a tingle in my neck.  Then I saw it.  “No Holds Barred.”  Hell fucking yes!  I was at that taping, I thought.  Oh you didn’t know?  Well I was kind of a big deal back in my hometown of Topeka “mother fucking” Kansas.  My Dad was so cool that he brought my brother and I to a live-taping of the movie “No Holds Barred” starring my childhood hero Hulk Hogan! 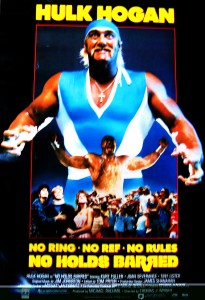 I didn’t think much more about it until I pressed play.  When I did, I was brought back to that day in an instant.  I remembered the person on the PA system trying to direct the crowd on when to cheer and what not.  He mentioned at one point that he wanted a bunch of us to go to one end to be taped specifically for the movie.  “Holy shit” almost blurted out of my mouth but my Dad was right there, so play it cool Jason play it cool.  We got in on the taping.  Woo hoo here.  Go crazy there.  Not much was thought of it.

Anyways, the beginning of the movie opens with “Rip” played by Hulk Hogan walking in the arena.  At that brief moment I started to smile right before a flash of the crowd filled the screen.  No fucking way.  I hit pause.  I don’t know if it was the two liters of Cracka-Cola I guzzled down or the copious amounts of “medicine” for my “insomnia” but that is my brother and I on the TV, clear as day, right there on my 2 year old 55″ inch LG LCD TV.  Got that sucker real cheap and on sale too.  It’s value has never been so greater than this moment.  There I was standing right next to my little brother cheering on the great Hulk Hogan.  I spent the next couple of hours rewinding and playing back my brief introduction into cinematic history.  I tried to look into my eyes.  I wanted to see what I was thinking then.  I looked so happy.  So content.  So full of joy.  Then it quickly hit me why… 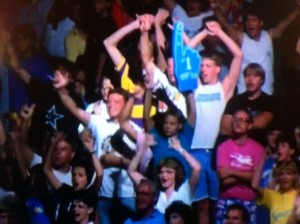 All my cherished memories from childhood came pouring back as I looked into the eyes of that 12 year old young man on my TV screen.  They all flashed by moment by moment.  Pickup basketball games, Nintendo, Movies, Jayhawk games on TV, Whiffleball tournaments in the backyard.  All these wonderful moments happened while visiting my Dad.  You see I’m a child of divorce, which wasn’t so bad really.  I got double the Christmas’ and Thanksgivings’.  So cool.  But as I continued to lock eyes with my former self, I can’t help but realize the impact my Dad had on my childhood.  He made every moment with him unique, special, and fun.  Every.  Single.  Time.

He passed away almost four years ago.  September 18th, 2010.  Ever since then well, I’ve been pretty fucking lost.  Off the deep end at points.  My life has since made a dramatic recovery for the better.  Things are really good now.  Like amazing now.  But one thing about my Dad passing that I couldn’t shake is what did he mean to me?  What was our connection?  What was our love like? 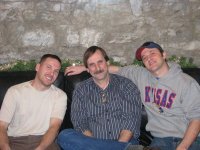 Glancing back to the young crazy Kansas-boy with his hand in the air on my TV, I knew right then what my Dad meant to me.  Almost four years later I finally got it.  It was moments like these.  He made my childhood the very best it could have been.  I guess I never really thought about it before.  I had a damn good childhood, due in large part to these type of moments.  Taking your crazy sons to some fake movie about a fake sport so you can fake scream at the fake match, only to finally be randomly watching your DVR some 25 years later and you see yourself for the first time looking back at yourself with the truest wisdom you’ve ever seen.  Thanks Dad.  I get it now.