Posted On November 6, 2014 By Drew Franzblau In Buzzworthy, The Scene

I Love Nordguard and So Can You

Nordguard Book 1: Across Thin Ice is a comic book that tells a harrowing tale of survival, camaraderie and mystery set in the Alaskan tundra circa 1903. It’s got everything. Memorable characters, solid art, an interesting setting. If you love comics you should really read this one.

The first time I read it, I gripped the book close to my chest, trying… failing to hide it behind my bag. Inside was a brilliant rendition of a frozen lake, sunlight peaking over majestic, snow capped mountains to reflect on its pristine surface but that wasn’t why I was embarrassed. I was embarrassed because the book in my hands was for furries. Furries, as I learned from a friend who insisted I pick up this book, are a much-maligned, weird little subculture of geeks who really like anthropomorphic animals. You know the Disney Robin Hood movie? The one where everyone’s a cartoon animal? That’s what furries are into.

What is there to say about the book itself? Obviously it’s gorgeous. Every panel is hand drawn and colored with an amount of detail not often seen in comic books. I mean, shit, just look at page one: 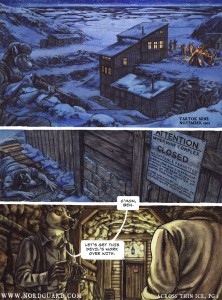 There’s a lot to love about just this one page. Personally, I’m a fan of how each panel raises the stakes. Panel one: a bonfire, a man with a gun. Panel two: a body, a warning. Panel three: oh shit, devil’s work? Three panels that get you really interested in what happens next. It’s pretty much exactly what a page one should do.

Also, just look at it. That’s not even one of the full page spreads. Seriously, every page is beautiful. Just look at this vista:

That shit belongs in a frame.

Did I also mention that Nordguard is one of those rare comics that has great art and a great story? I have a lot of comics on my shelf that just have pretty pictures in them and I’m not writing articles about them two years after I bought them. Across Thin Ice is only book one in a series and it does feel more like the introduction to a really great story than a story all by itself. However, the characters really cary the book and keep you turning the pages. The heroes are an arctic rescue team lead by Pi. She’s confident and tough and fiercely loyal to her team. Her team is London, the consummate professional, and Nick, the cocky joker. They’re stock characters but they’re done very well and used to great effect.

Have you noticed how I’ve talked all about how much I like this book and barely talked about the fact that the characters are cartoon dogs? Like I said, it’s embarrassing now that I ever didn’t want to pick up this comic. I assumed that it wasn’t my thing and more than that, I was afraid of letting people think it was my thing. At the risk of sounding like an after school special, we can all learn a valuable lesson here. I think we too easily allow our subcultural associations to become our identities and that can make us shut our eyes to a lot of cool stuff.

Fortunately, I also think this mentality is going away. It used to be when punk rockers and metal-heads crossed paths it meant someone was getting a beat down. These days it doesn’t mean anything if you like metal, punk rock, rap, and country all at once. True art comes from a combination skill and passion and those things can come from anywhere and go to anything. I almost didn’t pick up a great comic because it I didn’t think it belonged in my box of “Things I Like” but what I realized is that I really shouldn’t have a box like that.

Drew is a resident of Los Angeles with a film degree from UC Santa Barbara (go Gauchos!). He does freelance work in film and TV where he's done every job from a lowly PA all the way up to executive producer. When he's not talking someone's ear off about super heroes or video games or bad movies, he's rolling funny shaped dice and pretending he's a 12 level paladin named Marcus. Act now and you too can be graced with his every waking thought on twitter @DrewFranzblau!