Posted On March 26, 2014 By Shannon Folsom In Buzzworthy, The Scene

Alter egos: A lot of stars have them. Beyonce has Sasha Fierce, David Bowie had Ziggy Stardust and now, apparently, Nick Cannon has Conner Smallnut.

Cannon, who is set to release a new album titled, “White People Party Music” on April Fools’ Day, has caused a bit of a stir over the past few days, posting photos and videos of himself in whiteface and skater attire on Twitter and Instagram. Captions underneath the posts include hashtags like “FarmersMarket,” “GoodCredit,” “BeerPong,” and “CreamCheeseEating,” and introduce the pasty doppelganger as Conner Smallnut. 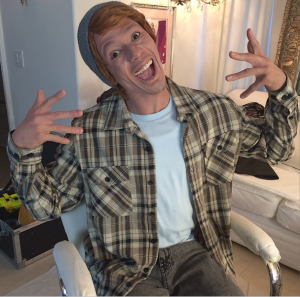 Connor Smallnut makes me uncomfortable for so many reasons.

Eh, probably not, but here’s the thing: We have to realize that Nick Cannon is a comedian, and all of this Conner Smallnut and “White People Party Music” business is just some poorly executed satire. Conner Smallnut only exists for the purpose of promoting Cannon’s new album, which is set to include songs such as, “Me Sexy,” an EDM-style banger (because OMG white people LOVE EDM) and, “Pajama Pants,” a comedic hip hop track in which rapper Migos repeats, “pajama, pajama” in “Versace, Versace” style.

Nothing that Nick Cannon is doing with his life is serious at the moment. He’s waving a giant, “IDGAF flag” for all of America to see.

Basically, Cannon has decided to troll white hip hop and EDM lovers with his new album, but he’s taken things just a liiiittle too far with the all of the whiteface and hashtagging. It isn’t quite racist, because everyone knows that racism only works one way (lol), but since there’s no clear intent behind Cannon’s Smallnut stunt, it’s pissed a few people off.

If only he’d shot for some Eddie Murphy-esque social commentary, maybe people wouldn’t have been worked up. But it’s Nick Cannon we’re talking about here…We can only ask so much.