Posted On April 4, 2014 By Renée Rapin In Buzzworthy, The Scene

I know this week was full of April Fool’s Jokes and your brain is hurting from deciding what is real or not. So, I give you some 100% true WTF headlines to soothe your mind!

A new airline company called Love Cloud is here to make your mile high fantasies come true! Why waste your time cramming into the tiny airplane bathrooms when you can have an entire plane to yourself to do whatever it is your heart desires?  These exclusive aircrafts fly over Las Vegas (of course) in both daytime and nighttime flights while you are free to move about the cabin and…you know.  The plane has been customized with a foam mattress, pillows, throws and more. After each flight, the cabin is cleaned entirely-including new sheets, pillowcases, towels, etc. The cabin also offers a sound system for you to create your own love sound track and a curtained door to separate you from the pilot. Don’t worry, he’ll be wearing noise cancelling headphones the entire flight. Bon Voyage love birds!

Those better be silk sheets and velvet pillow.

Kenneth Herold met Christina Lafave at a bar in the Wynn Hotel in Las Vegas. Drinks were drunk, words exchanged, and the two somehow agreed on Herold paying $300 for Lafave to give him a “massage” in his room. I’m suuure it was just a massage they discussed…

According to hotel security, Herold called several hours later stating his $35,000 Rolex was missing. He accused Lafave of stealing the watch, which she initially denied. She later came clean (not sure what made her confess) and told police she hid the watch in her vagina.  Police took Lafave to the University Medical Center, took X-rays, and lo and behold, the watch was there. Lafave was arrested and faces felony charges for grand larceny and possession of stolen property. Her lawyer claims they plan to fight, explaining that he search was unreasonable and medical intrusion. Good luck with that angle.

So I’m pretty sure if I saw a beached shark I’d freak out and run in the opposite direction. However, an unidentified female came across a dead shark washed up on the beach. Rather than doing the logical thing and calling wildlife services or shark patrol…whatever it is they have in Australia…she decided to take a time out for a photo shoot. 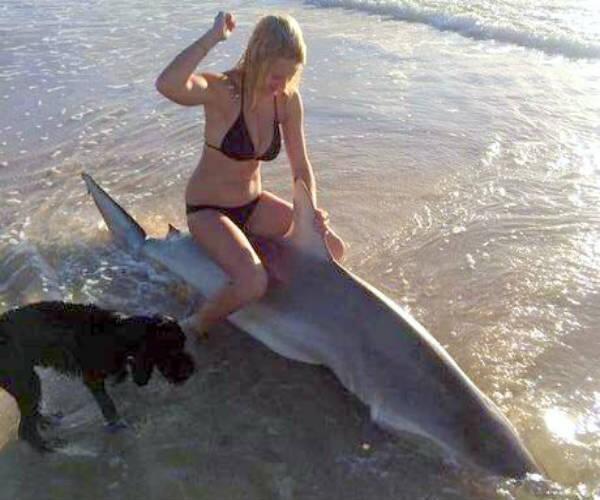 I mean I guess it’s kinda funny but I’ve watched plenty of Shark Weeks…enough to know that this is probably not the safest thing to do. Her photos have upset the wildlife officials, who are now warning people to stay clear of beached sharks. It is very possible for sharks to be washed ashore during their migration and it is very hard to tell if one is still alive or not. Whether this shark was really dead or just focusing on his Blue Steel look for the fall season, we’ll never know.

Well, leave it to Florida to try to domesticate a gator. An elderly woman was caught feeding an alligator for months with cereal and other snacks. The gator, called “Puppy Puppy” by the woman, lived in a pond outside her senior community center. However, since the gator became so used to the woman feeding it, it started to approach random people nearby. This of course started to freak the shit out of people. The poor gator was removed from the senior community center and later euthanized, as its natural behavior was forever altered to associate food with people. The following video shows the old woman strangely hanging out and feeding the gator like it’s a pond duck. Once it gets too close, she stomps her feet to make it move back. Crazy old lady, don’t you know you can’t tame a beast!?