Posted On April 5, 2014 By Jason William Spencer In Miscellaneous

When Did We Stop Looking Up?

The TV Series, “Cosmos,” has shown a new generation of viewers what Carl Sagan did for an earlier one.  New Host, Neil deGrasse Tyson, has shown over the last few weeks how amazing and inspiring our “Cosmos” can be.  However, that sense of wonder and awe is not reflected in the way the United States government views the agency most responsible for this, NASA.

As a % of the Federal Budget, here is what NASA funding looks like over the years. 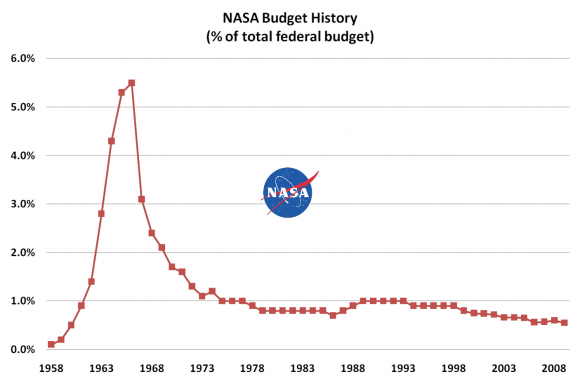 The current budget for NASA represents less than 0.5% of the Federal Budget.

“In terms of constant 2007 dollars, NASA’s FY2013 budget is slated at $16.014 Billion, which is the 23rd-lowest budget by constant dollar value. Ironically, 23rd is also the United States position in worldwide Science test scores.”(Penny4NASA.org)

I remember getting my first telescope when I was a child.  It was Christmas.  I had asked for one after getting a book on our Solar System from my elementary school library.  My face lit up as I un-wrapped it.  I couldn’t put it together fast enough.  I remember going outside and looking at the Moon for the first time.  Up close, bright, and majestic it was that night.  I was hooked.  Looking through that telescope was like magic to me.  To think that there were unexplored places in our Universe was exciting.  It made me feel alive!

That sort of excitement and wonder I had as a child is in the same vein as the thoughts that pushed Christopher Columbus, Ferdinand Magellan, and Lewis and Clark to search our world, guided by those very stars in the sky.  Human beings have a natural curiosity to explore their surroundings.  Have we lost touch with this innate human instinct?

The Great Recession of recent years has put a strain on every aspect of the Federal Budget, while the political mechanism associated with it has locked up.  Agreements are few and far between.   NASA has seen cuts just like most other government agencies.  However, NASA could be the one government agency that could single handily spur our struggling economy, all it needs is funding.

Projects NASA has slated for the future are things such as a return visit to the Moon, humans landing on Mars, traveling to an Asteroid, and deep space exploration looking for extraterrestrial life.  Just in the past few days, WATER has been discovered on Saturn’s icy moon Enceladus.  What would we find if we went there and dug through the ice to the ocean water below?  We may never know if funding is kept at these historically low levels.

In an environment of political and budgetary gridlock, it seems unlikely that both Republicans and Democrats could possibly agree on this…but could they?  Maybe this notion is not as crazy as it sounds?  NASA was formed under the umbrella of the Defense Department, and still has a cozy relationship with the military.  The Republicans should latch onto such a useful way to spend the Defense projects they hold so dear.  The amount of jobs and Defense contracts associated with NASA are immense.  The Republicans are always wanting for us to reach for the stars and to keep our country great?  I can’t think of a better way than to be the first country to step foot on Mars.  That dream won’t be possible without increased funding to NASA.

Democrats also have a stake in NASA spending.  STEM jobs, (Science, Technology, Engineering, and Mathematics) are the cornerstone of any Democratic platform.  Continued study of climate change would also be of interest to the Democrats. But what are really important are the non-Political reasons.

NASA programs, missions, and research have given rise to a multitude of new technologies which in turn created thousands of jobs and made our lives better.  Cellphones, CAT and MRI scans, Water Filtration, and many many more, all originated from NASA.  It spurs innovation and creativity.  Some estimates come in at a Rate of Investment of up to 23 dollars for every 1 dollar spent.  A fascinating study can be read here on ROI for NASA programs.

Maybe we should be asking not if we can afford this, but can we afford not to?

Two questions have permeated the ions of humanity:

Do we still want these questions answered?

Our country is at a crossroads.  Amongst the negativity, the gridlocked politics, and the ever-increasing wealth gap, the American people are looking to be inspired.  They are looking for something positive and uplifting in this strained time we live in.  Why not take the lead in the world and set our sights on the heavens?  Just like our ancestors did.  Just like the explorers did.  We are capable of great things…

As long as we remember to look up.

“If you want to teach someone to sail, you don’t train them how to build a boat. You compel them to long for the open seas.” –Antoine Saint-Exupery

For more information and to get behind a movement to increase NASA’s funding to 1% of the Federal Budget, go to PENNY4NASA.ORG