Age Is Just A Number To Bernard Hopkins

Bernard Hopkins stepped into the ring Saturday night dressed in burgundy and gold. It was in respect to the Washington, DC crowd that he was in front of. The DC armory was packed.

Hopkins threw combinations with ease, landing shots at a rate more than twice his opponent’s, and he was eager to talk about his next fight at the end. He did not look 49 years old Saturday night. Final total punch stats had Hopkins landing 49% of his shots whereas Shumenov only landed 20% wasting too much energy on single jab misses.

Hopkins is commonly referred to as “The Alien” as of late and “The Executioner” in the past. He is 49 years old and in phenomenal shape. He put on a clinic for Beibut Shumenov, a 30 year old undefeated boxer out of Kazakhstan who showed up without a trainer Saturday (a bizarre move). His training was going to come from within, an attitude you simply cannot have going up against a future hall of famer like B Hop.

Sure, Manny Pacquiao was fighting Timothy Bradley on another channel in another city, but their fight was nothing compared to the elder statesman of boxing’s contest. Besides, this writer’s opinion of Pacquiao is that he only got great when he met Freddy Roach and even then he had nothing in terms of speed on Floyd Mayweather. Oh, and neither Bradley nor Pacquiao are 49 years old. Pacquiao is 35 and has not dominated a fight the way Hopkins did in years. Pacquiao is a rough and tough kind of fighter. You have to give him credit for his heart, determination, and just pure grit to stick it out with his opponents but Hopkins looked fresh and untouched, still going strong in the championship rounds (11 & 12) of the fight. Boxers like Hopkins or Mayweather are a breed all their own in the fighting world. They’re the reason boxing still has a pulse.

The decision, for some reason was split – 2 judges scored in favor of Hopkins and 1 in favor of Shumenov. But, it was without a doubt unanimous. Showtime Boxing analysts scored it unanimously even giving Hopkins 3 more rounds than the two judges who scored in favor of him. In his post fight remarks, Hopkins said that he has nothing to do with the scoring and nothing to do with the boxing commission. He said that it’s boxing’s job to decide who is judging right and who is not.

He could care less about the scorecards.

He knew he’d won and that was all that mattered.

In the 11th round, Hopkins delivered a stiff punch that stonewalled Shumenov, knocking him down. The bout was all but over. He looked great in the 11th and 12th and there was no doubt at that point that he was taking home the win. 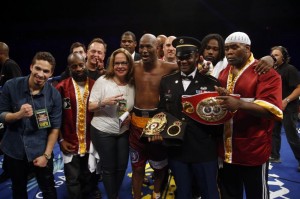 Hopkins is an enigma in the boxing world. He is something entirely unique from the rest of the fighters out there. He is still sharp, quick, fit, and a favorite in every fight he fights. You can’t count “The Alien” out and that’s probably why they call him “The Alien.” He says he wants to fight before he turn 50, but if it has to wait until next year, he will amaze the sporting world even more by getting in the ring and putting on a show unlike any other at his or any age.

“We get knocked down, but we get back up” Hopkins said in his post fight interview. Of course the man has lost in 49 years on this planet. But, he’s still on top of the fighting world. His story is one of hope and redemption that boxing needs if it intends to remain relevant. He did five years in prison at the age of seventeen (probably the biggest knockdown of his life). His life prior to seventeen was one entirely different than the one he lives now. It was a hard upbringing in the worst of circumstances. He was witness to evil as a child and when it all hit the fan, he told himself that he would never go back there again. When he got out after five years, he swore he would use boxing as a way to escape his previous life and its trappings. He promised to become a better man and that is exactly what he did.

Now, he is an undisputed pound for pound great, a future hall of famer, and a dedicated craftsman.

Bernard Hopkins, at age 49, takes home another quality win, a belt, and he plans to do it again.