Posted On February 19, 2014 By Cat Hausler In Sports, Sports Takes

Why the USA Women’s Hockey Team is Awesome

When I was eight, my parents moved us from the San Francisco Bay Area to a small Colorado mountain town. Don’t ask me why, it’s a long story… Anyway, apparently, one day after we’d been in Colorado for a few months, I came home from school and announced, “Carlee’s dad is starting a girl’s hockey team and I’m going to play!”

My parents were surprised to say the least. Not only had I never played hockey before, but I could barely skate. Still, I did join the Lady Blades hockey team and went on to play for 10 years.

The day I decided to play hockey was in the winter of 1997. And just two months later, the U.S. Women’s Hockey team made history as the first women’s hockey team to win a gold medal in an Olympic games.

The last game the 1997-98 U.S. Women’s Hockey Team played before heading to Nagano, Japan, was against Canada in Colorado Springs, Colorado. My newly formed Lady Blades hockey team was there. The U.S. lost that night, but went on to defeat Canada for the Olympic title a few weeks later. So for the rest of time, I will associate my starting to play ice hockey with USA Women’s Hockey winning the gold.

The U.S. women have yet to win another gold since the Olympic debut of women’s hockey in Nagano. But this year, things are looking better than ever. Putting my sentimental attachment to USA Women’s Ice Hockey aside, here are some reasons why this year’s team is so awesome:

They have mad skills – In their second game in Sochi, U.S. Women’s Hockey beat Switzerland 9-0. Not only is that score insanely high, but they also at one point managed to score two goals in a matter of 30 seconds. Then on Monday, the U.S. faced Sweden in the semi-finals. The American women won 6-1, outshooting Sweden a whopping 70-9. 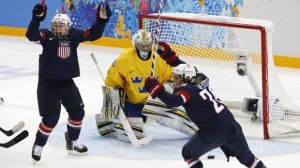 They’re educated– Every player went/goes to a four-year college. Four of them can even claim Harvard as their Alma Mater. 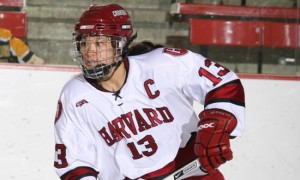 They’re beautiful– Hockey may be thought of as anything but feminine, but the ladies of team USA can go out and kick some ass on the ice and still look good when they’re done. 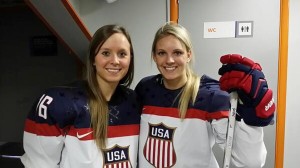 They’re experienced– 11 of the 21 players were on the team in Vancouver that won silver four years ago.

They respect their competition– When asked about their rivalry with Canada:

“I think intense is probably a better word than hate because we all do respect one another at the end of the day,” U.S. forward Hilary Knight said. “They’re at the top of their game, and we’re at the top of ours. It’s a great battle of the border there. It’s definitely a hot ticket.”

It’s all in the family– Twins Jocelyne and Monique Lamoureux were a part of the silver-winning women’s hockey team in Vancouver and they’ll play together again in the gold medal game versus Canada on Thursday. 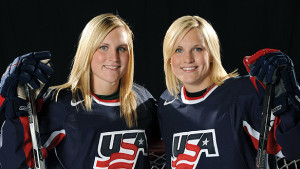 Really, what’s not to love? 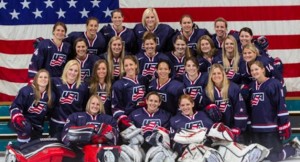