I’m home for the summer after my first year of college. Now, I’ve been working a few part-time jobs, catching up with friends, and re-adjusting to suburban life, but I have found myself with a larger abundance of down time than I had at school. So, how does that culminate? Like most college students, free time translates into lying under my covers, and staring at a computer screen. In my specific case, it means catching up on the entire season of Saturday Night Live that I neglected to watch during the school year. I’m happy to report that I’ve come to a salient realization: this is the most fabulous program to ever air on television.

Of course, I’ve watched SNL before. I remember coming home quite late (by 14 year-old standards) one night in middle school, to find my dad sitting down at his recliner, and turning our television to NBC. January Jones was hosting, and although this episode was infamous, I remembered being enraptured by the concept and vivacity of the show. In the years that followed, I would go though spurts of sitting in front of the TV like clockwork, waiting for 11:30 to strike so I could absorb myself in whatever hilarity would inevitably ensue. Other times, life caught up with me and I would forget about my Saturday evening companions. Throughout most of our time together, SNL and I were in an open relationship, but there was no real commitment. That’s not the case anymore. 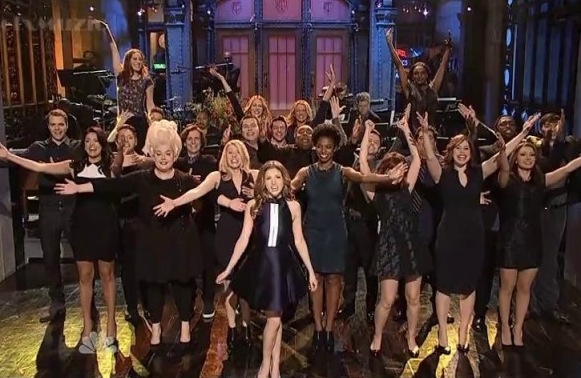 What I didn’t grasp until recently, however, is how embedded Saturday Night Live is into our modern cultural topography. When ANYTHING significant happens in politics, pop culture, or humanitarian affairs, SNL covers it that week with brevity and wit. It’s a dynamic part of the campaign fever every four years, with politicians continually appearing before elections to try and curry favor with the masses. However, SNL does not simply mimic, or even just spoof things that happen in our society-it has turned into the most important spot on television for putting large-scale events and even prevalent ideas into perspective. These sketches that cover current events often help us realize the hilarity in these occurrences. They send a message that we shouldn’t take everything at face value. And then there’s the rule of thumb, that if you’re mocked on SNL, that’s when you know you’ve made it. SNL is also an important reminder that Aidy Bryant hasn’t met a wig that she couldn’t rock, and that, even though we may deny it, mostly everything that has to do with farts is indeed funny.

Moreover, SNL provides me with pure, unceasing joy. Every 90-minute period provides (pardon me if I sound cliché), an escape from the trivial worries or even pressing anxieties that everyone experiences. However, this is not mindless media consumption. Through the work of brilliant writers and gifted comics, we are taken on a weekly roller-coaster ride and kept on our toes, laughing all the glorious way (even if we are sometimes shocked into it.)

I firmly believe that as there is broadcast television, millions of people will be tuning in every Saturday at 11:30 to see the shiny celebrity hosts and repertory casts whom I have come to regard as familiar friends. I will relish in the crazy stock characters, the talk-show spoofs, the musical performances, Colin Jost and Cecily Strong’s smiling faces on Weekend Update. (Also, Colin. Should you see this, please know that I am slightly in love with you. I can’t resist a smolder, political satire, or that unbelievable hair. Oops?) SNL will continue to be my favorite TV show and a prominent simple pleasure in my life. And one day I’ll sit in the audience, scream my lungs out during the opening monologue, and laugh in all the wrong places, loving every second of it.

So, SNL, keep on doing exactly what you’ve been doing since 1975. I’m ready to take our friendly acquaintance-ship to the level. You know how they say in The Notebook, “If you’re a bird, I’m a bird?” Well. I find that phrase trite. However, as long as you’re live from New York, I’ll find my way to you.

And, Colin Jost? Just so you know, the offer will ALWAYS stand.

Sarah Barnitt is student at the University of Michigan who hails from the crown jewel of the Tri-State Area, Long Island (others might not agree, but to that, she says "eat a bagel and hush.") She considers herself curious, introspective, cynical, and usually theatrical. However, she usually just wishes that anything that isn't related to J.Crew, Buttercream frosting, or Saturday Night Live would leave her alone. In the future, she aspires to become Audrey Hepburn, and doesn't have a backup plan.