Posted On July 7, 2014 By Jason William Spencer In Television

“Tyrant” is an explosive political drama that takes place not in the comfy confines of our own country, but the war-ravaged Middle East. The whole thing centers on an All-American family lead by Bassam “Barry” Al-Fayeed, a Pediatrician, returning to the nation of his birth after a self-imposed 20-year exile. He must face his father, a ruthless Dictator of this Middle Eastern nation, and the rest of his ruthless family members as he fights the demons of his past.

This epic tale is one of those rare chances to witness a totally foreign world through the eyes of a subject we can all relate to, family. This entire series comes down to the Al-Fayeed family and how they help, hurt, support, deceive, save, and kill each other. A wild and dramatic cross between “The Sopranos” and “Homeland,” “Tyrant” just may be this year’s resounding Summer hit. As the show plans it’s 3rd episode of its first season this Tuesday night, we take a look at the 7 story lines to watch as the Al-Fayeed family fights to survive.

1) How will Jamal lead the country?

Jamal is one sick bastard that’s for sure. But now with his father out of the way, will he lead his country into the future or will he go mad with power?

2) Will Bassam(Barry) help his brother run the country?

The seeds are there for an initial honeymoon period, however how long does it take for Jamal’s wicked ways to run thin with Bassam and his American way of life?

This has the chance to be an explosive story line. Bassam’s son, Sammy, can’t keep the secret that he’s gay forever. It will be interesting to see how the Writers handle such a Middle-Eastern taboo.

4) How long will Molly back her husband?

The supportive wife routine can only last so long. At this point, they are there for a visit. What happens when things become more permanent?

This story line is special because of how it was introduced. It was briefly hinted at, never to be spoken of again. The Al-Fayeed family rushes to the airport to catch their flight, thinking they missed it, the daughter Emma wonders if “maybe it’s a sign from Allah that we go to Disney World like every other family.” Incredible yet subtle line.

Talk about timely!  If things start to crumble for the Al-Fayeeds, will the U.S. intervene? Having an American family at the center of such an event could be complicated! Where would Bassam’s loyalty land?

As the world saw with the Arab Spring, citizens can only take so much and the Al-Fayeed family has been nothing short of downright ruthless. Can Bassam keep the peace or will Jamal ignite the waiting powder keg? 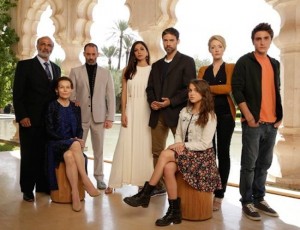 Beyond the story lines, “Tyrant” aims to show the American viewing public something they’ve never seen before. What they have different, but more importantly what they have in common with the Al-Fayeeds. Because in the end, all you have is family.

“Tyrant” can be seen Tuesdays on FX