Posted On January 27, 2015 By Basic Becca In Television

I’ve never been on the hunt for a wife, but I have a feeling Chris Soules is going about this in all the wrong ways. Like maybe going on a reality t.v. show and making out with over twenty girls is not the fast track to finding the perfect woman. Regardless of my disagreement with the road to matrimony Chris has chosen, he remains certain that his future wife is in the room.

This week’s surprise was that Chris’s three sisters got to choose the girl for the one-on-one date. That is super cute that he trusts them; if I let my three siblings choose a person for me to date it would probably be one of the biggest regrets in my life. While the first group date is going on, the sisters arrive at the mansion to have mini one-on-one time with the girls that are home. Jillian (and the black butt bar of censorship) has to be woken from a deep, poolside slumber that leaves her adorned with crusty drool, lots of sweat, and probably some funky smells. Whitney and Jade have the best conversations with the sisters, and Carly, the cruise ship princess, says she “hasn’t had a guy be nice to [her]” and she “wants [Chris] to be like [her] grandpa.” I guess she’s into older men. 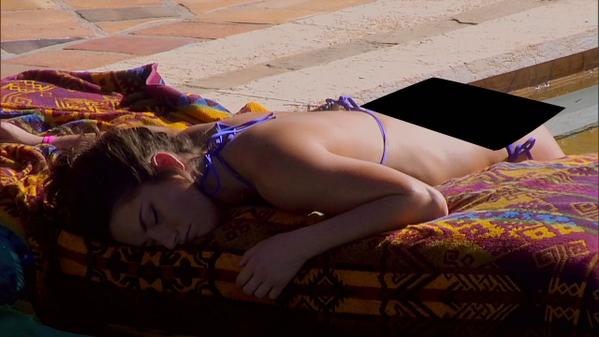 Let’s do what feels natural

The first group date was “a date made for bimbos” according to Kelsey, the guidance counselor. The bikini clad women spent some time at a lake vying for Chris’s attention which obviously led to the removal of tops and bottoms because how else would you tell someone you’d make a perfect wife? Kelsey, one of my original favorites, is proving to be fake and annoying; during one of her many monologues of complaints, she got stung by a bee on the upper, rear, inner thigh– so almost her vagina but not quite. She later thought it was a joke when Chris announced they would be camping in tents at the lake. It was not a joke. Tents were set up, whiskey was consumed, and alone time finally began. Kaitlyn, aka sparrow elbow patches, does a decent job at asking intentional questions. She finds out that Chris is a touchy-feely guy and shares that she feels most loved when people tell her with words. So basically they took a love language test and Chris got physical touch while Kaitlyn got words of affirmation (if you’re wondering, mine is gifts). Back at the bonfire, our go-to crazy girl Ashley S. is drunkenly performing campfire songs and dances, Mackenzie asks (again) if anyone believes in aliens, and everyone thinks Kelsey is super fake. Kaitlyn thinks “Ashley S. is entertaining but like possessed and totally crazy at the same time,” and I really can’t disagree with her. During alone time with Chris, Ashley S. asks “what are you?” and he nods and smiles. She later tells him she loves him and then smashes her lips into his face when he tries to talk to her. Aliens exist, and Ashley S. is undoubtedly one of them.

“I don’t think Ashley S. is here for the right reasons, because I don’t think she knows where here is.” ~Kaitlyn #TheBachelor — The Bachelor (@BachelorABC) January 27, 2015

Ashley I., the other crazy Ashley that wants to be a Kardashian, just knows that she and Chris connected and the rose will be hers. She is careful to not get too close to the fire for fear of her fake lashes melting off. She’s also sober enough to remember to reapply lipstick. At a bonfire. Where they’re camping. For all nature’s creatures to see and love her for. Her certainty is misplaced, and Chris gives the rose to Kaitlyn.

When everyone has returned to their tents, Ashley I., the virgin, sneaks into Chris’s tent because she wants to make sure he gets her… whatever that means. After waking him up and making out with him she tells him that she is “inexperienced in every way” hoping that he’ll realize she’s a virgin. He later tells us that he had no idea what they were talking about. Ashley assures us that she is “not a hookup girl; [she’s] wife material.” I’m not sure I’m picking up what she’s putting down.

Jade is chosen for the one-on-one date by Chris’s sisters, but, surprise, he won’t know who was chosen until the date starts! Word spreads fast at the house that Jade is going on a Cinderella date, and Ashley I.’s true motives are revealed; “All I wanna do is go on a date and dress up as a princess,” she pouts. It only gets worse when Effie Trinket’s long lost sister arrives to transform Jade– dressing her in a beautiful ball gown that is polished off with diamond earrings and Louboutin’s she can keep. Once the red carpet leading to the Rolls Royce arrives, Ashley I. is an absolute wreck. 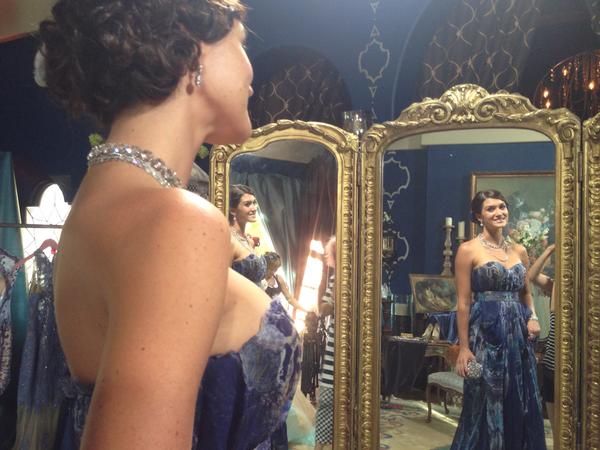 Chris has a huge smile on his face when he sees Jade enter the ballroom– either because her boobs rock in that dress or because he’s happy his sister’s approve of his bed buddy… maybe both. Jade and Chris are both from small towns, they’ve both been engaged before, and they both want to bang each other. Jade gets the rose, and the two dance on the tiniest stage I’ve ever seen surrounded by a live orchestra while scenes from the upcoming live-action Cinderella are played for them. They both feel like they’re living in a fairy tale, which is absolutely the point because obviously this doesn’t happen in real life. Chris feels that he may have “overlooked” Jade previously.

Back at home, Ashley I. puts on the princess dress she brought for the princess date she wanted to go on and sits alone on the couch eating corn on the cob. Definitely not pathetic at all. 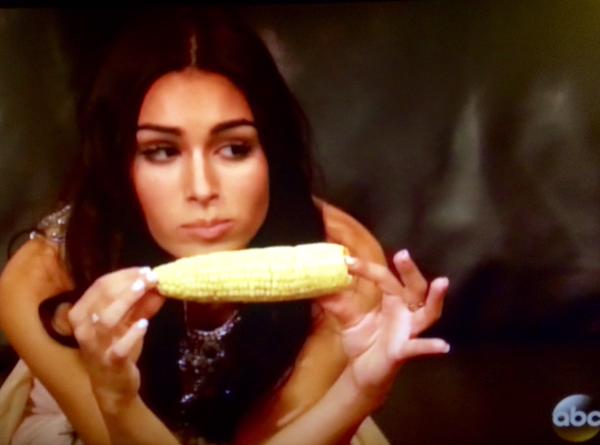 This date starts with 6 boxes addressed to the women on the date. The boxes are ripped open, and waiting inside are wedding gowns. Wearing the spankin’ new wedding gowns, the women board a private jet and arrive in San Francisco to compete in MuckFest MS, a mud obstacle course that supports the National Multiple Sclerosis Society. Great cause, hilarious date. Unfortunately for the women on the date, Jillian was present and determined to win. She was neck and neck with Becca for about two minutes before taking such a dramatic lead that rest of the competitors couldn’t even see her. Becca admits that she was doing great until she had “ball swinging at [her] face.” Carly wonders if “Jillian’s dick is bigger than Chris’s?” Obviously, Jillian won the race.

Jillian and Chris have a romantic dinner overlooking San Francisco from a balcony of the Fairmont hotel, but romance is clearly not on Jillian’s agenda as she rambles on about the silliness of having a five year plan, her workout regimen, her dad’s filthy sense of humor, and asking her date if there is “shit in her teeth.” Jillian also asks Chris “would you rather have a sex with a homeless girl… or abstain from sex for five years?” Chris is so clearly not interested in the conversation and later admits that he was in a land more on par with that of Ashley S.

Chris tells Jillian that he doesn’t see a future for them, she cries and apologizes for her inability to be vulnerable. I was starting to like Jillian and the black bar that accompanied her booty. I’m sure she’ll find the perfect man for her at the gym when she gets home. We’re bound to see dat a$$ in a few magazines and blogs.

Megan wants to play a game with Chris that tests three of his five senses: she blindfolds him and feeds him food. When asked what senses she’s testing she says taste and smell. That’s two. He thinks it’s cute. I think she’s dumb. When we see Ashley I., she is wearing her princess gown for the second night in a row. She pulls Chris aside to talk and nervously asks him what he got out of their conversation in the tent. Chris basically admits he had no idea, she tells him she’s a virgin, Chris “totally respects that.” She proceeds to freak out because he didn’t kiss her and that means she scared him away. Her bff Mackenzie the alien lover realizes that “anything small or big, she blows it out of proportion.” During Ashley I.’s meltdown, we also learn that Becca is a virgin, but she’s not freaking out about it. 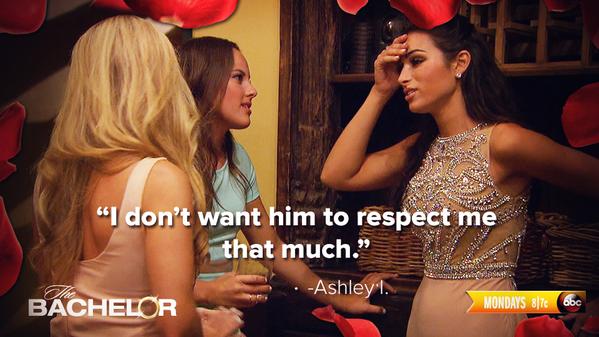 Britt and Chris get in a bit of a tiff when she calls him out about “making other girls feel special” and “questions his integrity.” Chris surmises that the women don’t think he’s there for the right reasons, so he “handles it like a man.” Right before the rose ceremony, he gives the speech about being here to find a wife and anyone who isn’t looking for that should leave now. Megan is smiling and everyone else has no idea what is going on. Of course, Ashley I. thinks it’s because of her because isn’t everything?

Kaitlyn and Jade are safe. The roses are given to Whitney (the wedding crasher), Carly (the cruise ship singer), Megan (the blonde with the fruit), Samantha (who are you?), Mackenzie (Kale’s mom and alien lover), Kelsey (the fake guidance counselor with bee sting on the crotch), Becca (the down to earth virgin), Ashley I (the virgin/ Kardashian wannabe), and Britt (integrity questioner). This week we said goodbye to Ashley S. (who will likely be heading to psychiatric ward of some type), Juelia (the widowed mother), and a girl I’ve never seen before whose name I don’t know. When Chris says goodbye to Ashley S., he whispers “take care of yourself” because Lord knows homegirl needs some help. She departs with a smile on her face and “no feelings.” 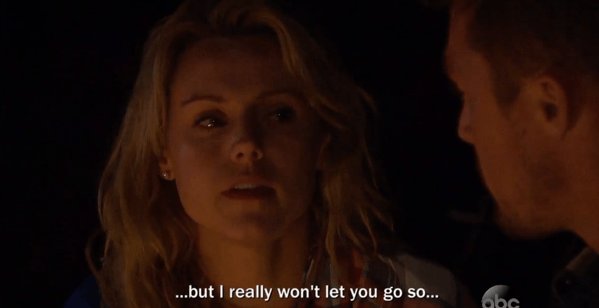 I’d like to thank the Lord for keeping the power on for me to watch this weeks episode and recap it for you during Snowmageddon 2015. For everyone concerned, I’ve got wine, cereal, and banana bread, so I should live to write about next week’s episode.