Posted On January 25, 2015 By Payal Majithia In Dating For Women, Girlzone

How Men React To Feminists On Tinder (With Screenshots)

I have considered myself a feminist for an extremely long time now, and a very passionate one at that. As a Gender Studies major in university, a woman of colour, and a minority within a couple of essential aspects, I have found myself coming to the realization that it will take a hell of a lot of effort to change the world as it is today. To abolish misogyny, raise awareness, and bring women/minorities up to the level of the white capitalist supremacist heteropatriarchy are all far-fetched dreams of mine, but dreams that can nonetheless be accomplished through not just the actions of one person, but of many allies standing together in perseverance. Reflecting on my experiences, I decided to accumulate my misogynistic experiences and put it on display in this article to prove the existence of sexist microaggressions through which inequality and disregard of the movement towards equity rights continues to dominate within our society.

Essentially, in result to prove the conclusion on why we still need feminism today, I decided to conduct a little social experiment of my own using Tinder. I created a profile, added some photos, and specifically mentioned in my description that I was not only a Gender Studies major, but also a feminist. Essentially, the results were what you would expect from 20-somethings living in the district of a predominantly white, upper-class university. Despite some enthusiasm from some men here and there, I gathered information in the form of screenshots, posting those which I found the most bafflingly ignorant and problematic. My point here is: these screenshots are here for us to observe, to laugh at the ignorance of, but also to essentially comprehend how a problematic system of misogyny still exists within our constructions of society. 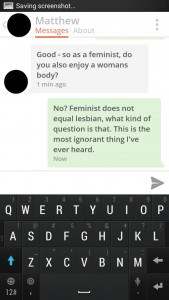 “Feminist?1?!!?11!!?!1 Must be a lesbian. Who burns bras. And doesn’t shave her legs.”
(*Disclaimer* It’s totally cool if you are a lesbian and/or a feminist who does or doesn’t shave your legs. Hair removal should be a choice, not a preordained necessity for women!) 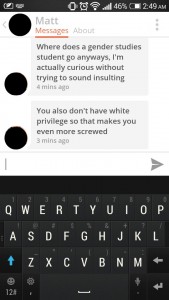 “Bashing this woman’s degree simply isn’t enough, I must point out the fact that she is a marginalized, oppressed minority in the West and lacks the privilege which I have!” 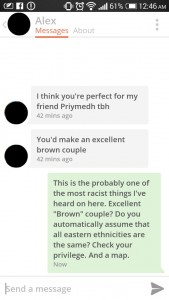 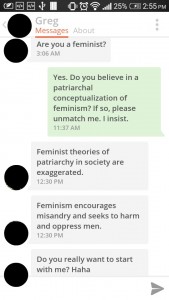 “I’m afraid of being oppressed by feminists (people who want equality) because I am so used to misogynistic constructs of society that I will go into a hypocritical mindset that rebels against misandry (the belief that women are superior to men) even though minorities have been stuck in patriarchal societies for centuries now and despite the fact that misandry and feminism are NOT the same thing! I will clump them together anyways because I am a sexist bigot.” 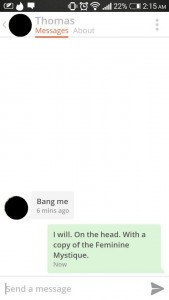 “Societal constructs make me feel like I have to objectify you to feel a sense of masculinity and superiority over you.” 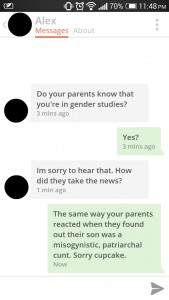 “I put down other people’s degrees showing promises of change and progression within the world because I am afraid of a change within our societal hierarchy that won’t put me on a privileged pedestal anymore.”

And of course, with every storm cloud, there is a silver lining: 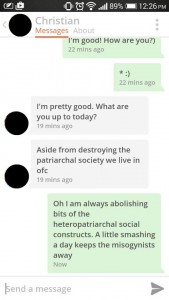 Dale Spender once stated, “Feminism has fought no wars. It has killed no opponents. It has set up no concentration camps, starved no enemies, practiced no cruelties. Its battles have been for education, for the vote, for better working conditions, for safety in the streets, for child care, for social welfare, for rape crisis centres, women’s refuges, reforms in the law. If someone says, ‘Oh, I’m not a feminist’, I ask, ‘Why? What’s your problem?’”

With the exception of one, the men above are on a different wavelength upon which they don’t just reject feminism, but outright shut down an advocate of its progression. Yet for the ones that aren’t so blind (few and far between as they are), well, they look damn good in comparison.

Payal is a twenty-something Gender Studies major with the dream of one day becoming a passionately successful social worker/therapist and living in a place that isn't -30 degrees every winter. She is a dark chocolate addict, cat lover, and loves exploring life through the prospect of writing and desires to offer new perspectives to others. Payal will one day successfully smash the patriarchy.