It’s been about a year since I downloaded Tinder and we’ve shared some interesting times. Not good times; mostly bad/weird times, and one good time that turned bad.

I only met up with 2 guys from Tinder, so in other words I made 2 huge mistakes.

Here’s the first one:

It was in my beginning stages of Tinder, you know, back when you’re getting more matches than you thought was possible (do THAT many people really find me attractive? If so, why am I on Tinder)? And you talk to each match with wide-eyed naivete. You’re like a kid in a candy store, only if you’re me in this case, the candy store is Atlanta and the candy is sexy black men.

Enter: My first Tinder date. His name is Denzell, he is training for the NBA, and he is 6’8″. All of those statements were true.

He lived in Peachtree City (about 40 minutes from Atlanta, I think?) and agreed to meet me at a bar near me. I waited in my car until he texted me that he was there, and  I made my way over to the bar. On the way, I walked past a very large-looking black man chilling on a picnic bench. I thought it was him, but I didn’t want to walk up to a stranger like, “Hey are you that guy I agreed to meet off this sketchy dating app?” So I pretended to be oblivious and walked right by him, until he called my name and I feigned surprise.

For the record, he really was huge. It was like going on a date with a Monstar, you know, from Space Jam?

We went to a bar that had board games for you to play–this is a thing in Atlanta, can anyone else confirm? Anyway, I ordered a Guinness, I think. He just got a cup of water. Definitely kind of weird considering we were both of age, but whatever.

To me it’s always weird when you meet someone for the first time that you’ve been corresponding with via text or online. I always imagine a person talks a certain way, and then when they don’t it always takes me a while to reconcile. So Denzell, I thought he would talk like a regular guy, maybe have a bit of an accent, who knows. In reality, his voice was like Barry White deep and everything he said came out suuuuuper slow, like our whole meeting was pre-recorded and everything he said was in slo-mo. It was hard to pay attention to what he said when words came out of his mouth at a rate of like 3 per mintue.

We started playing Candyland and I was just crushing him. I mean like, I literally won every single game. I don’t know how; I wish I was that lucky in regular life. He was getting progressively more annoyed, but like in a good-natured way, and he asked how I was so fucking good at Candyland.

“Well actually,” I joke, “I play in international Candyland championships and I’ve won a few times.” I couldn’t keep a straight face though, and I laughed.

His eyes bugged out of his head. “Really?” He asked. “Damn I guess I don’t feel so bad losing to you anymore.”

In my head I was like the Frye squinty eye meme, thinking like, “Can’t tell if he thinks I’m serious or is just a really good actor?”

We deadpan stared at each other for a couple more seconds, before I broke the tension with, “I’m just joking, I’m pretty sure international Candyland competitions don’t even exist.”

“Ohhhhhh, damn, really?  Well then how are you so good at this then?”

“Oh, okay. Damn, I can’t believe I lost this many times and you’re not even a world champ or nothin’.”

It was at this moment that it became extremely apparent to me where the whole “dumb jock” stereotype comes from. Bless his heart…

Eventually I finished my beer and he finished his water and we got the check. I paid since I was the only one who actually ordered anything that costs money. To be honest, I thought it was a little weird, because we did meet on Tinder where the sole purpose is to hook up with someone A$AP Rocky, and if this guy was trying to get in my pants the least he could do would be fork over the $4 for my pint but whatever, that’s none of my business, that’s just the patriarchy talking anyway.

We left and I was debating to myself, “Is this guy gonna kiss me? I really hope not. I’m not really down for that and god damn he is soooo dumb. Nice, but dumb.”

We stopped at a corner.

“Well, I’m parked over there,” I said, gesturing in a general direction.

“Oh, okay, I’m parked right there,” he said, gesturing in an opposite direction.

I guess this is it, I thought. Get ready to dodge his lips. If you can dodge a kiss, you can dodge a ball. I smiled to myself. That’s not bad, I gotta remember that for later.

“Okay well then I’m just gonna give you a hug right here,” Denzell said, as his gigantic arms wrapped around me.

Hey, maybe Tinder isn’t so bad, I thought. Maybe there are some guys out there who aren’t just trying to fuck. You know what, he seems like a nice guy. This hug is pretty legit. I’m sort of glad I did this because now I know there are nice guys on Tinder.

And then a few days later, I got this text: 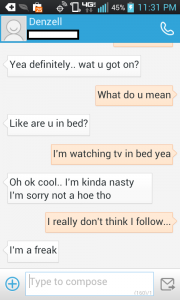 And that was the first time I deleted Tinder.