Posted On October 16, 2014 By Ascher Robbins In Movies, The Scene, Up For Debate

So, two nights ago, I saw a movie I’d been wanting to see for quite some time – Gone Girl. Having never previously read the book upon which the film is based, my enthusiasm came from my appreciation for director David Fincher and the enticing previews I had seen.

First things first: the film was fantastic. I recommend that each and every one of you go see it ASAP. But now, a few days removed from roller coaster that is Gone Girl, I’ve found myself thinking a lot about the movie as a commentary on modern life in America. Gone Girl is a film that can be interpreted in many ways – a whodunit murder mystery; a complex character study; an unfiltered look at love and marriage and motives; and yes, a scathing report on the state of the media and criminal justice system in the 21st century. The latter interpretation is perhaps the most interesting, and the one I would like to focus on here.

Before I get into this, I should note that, obviously, there will be SPOILERS from Gone Girl, so, if you have yet to see the film and plan on doing so, STOP READING HERE.

With that out of the way, let me explain. Gone Girl details the all-too-common scenario that occurs when a pretty young woman goes missing in present-day America. We’ve seen it time and time again. Press conferences are held. Tears are shed by loved ones (or, tears are NOT shed, and loved ones are crucified by the media and public alike). Nancy Grace and her cohorts ubiquitously flood the airwaves with theories and opinions and so many pictures of the missing person. We are inundated 24/7 with updates from the case, no matter how insignificant. Names like Natalee Holloway, Laci Peterson, and JonBenet Ramsey become an unforgettable part of American culture, etched into the public consciousness for eternity.

The circus plays on. Day after day, month after month, and even year after year, until a resolution is reached, or oftentimes, until the public loses interest and moves on to the next tragedy.

This is what our media has become, and in Gone Girl, it’s represented with pinpoint accuracy. Ben Affleck’s character, Nick, the husband of the missing blonde beauty in the film, is scrutinized and crucified for everything he does – from the big things, like his infidelity, to the little things, like some nutjob snapping a candid selfie with him. And it’s not at all far from reality. It’s not just missing persons whose faces are broadcast ad nauseum for weeks on end. For every Natalee Holloway, there’s a Joran Van der Sloot. For every Laci Peterson, there’s a Scott Peterson. For every JonBenet Ramsey, there are John and Patsy Ramsey. More often than not, the legal system reaches a verdict (or never gets a trial) long after the suspects in these cases are tried and convicted in the pathetic court of public opinion. Gone Girl excels in representing this. Nick is barraged by paparazzi every time he sets foot outside. He’s hated by strangers. Every aspect of his personal life, from the mundane to the macabre, is speculated about by a who’s who of talking heads. It’s sickening. Whether an individual is ultimately guilty or not, far too much is decided by a naive and unqualified public jury. It’s telling in the film when Tyler Perry’s character (Nick’s hotshot lawyer) mentions that most of the case hinges on how the public views Nick. 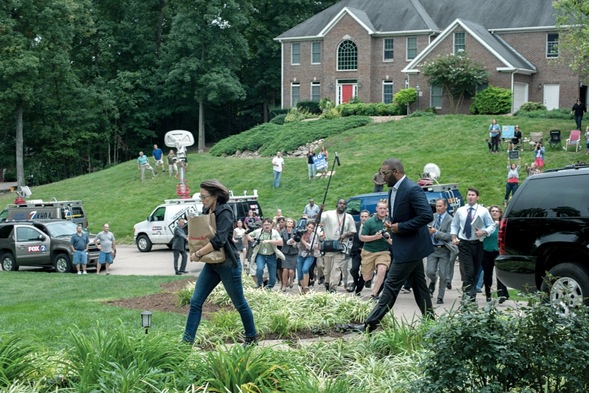 But enough about the media; they’re only half of the problem illustrated in the film. Gone Girl excellently highlights the inadequacies and prejudices that are an intrinsic part of our Criminal Justice System. The movie clearly details how the public perception of how likable or sincere a suspect comes across in front of the flashbulbs can influence those whose job is to find the real, objective truth in a case. One of the main investigators of the fictional case in the movie states that he believes Nick to be guilty, because “My wife thinks he’s a killer.”

I live in Boulder, Colorado. Accordingly, the JonBenet Ramsey case is especially relevant to me. Whether the little girl’s parents killed her or not is an issue on which I will offer an uneducated opinion, however, the parallels between this real-life case and the film are astounding. In both scenarios, the police focused way too much on the easiest suspect(s), failing to ever reach the real truth. Not only does this amount to a failure to bring justice to a victim of a heinous crime, but it oftentimes slanders and defames presumably innocent (yes, you are presumed innocent until found guilty; this is America) individuals in the process. We see this kind of police work time and time again, as investigators are swayed by their personal opinions and public perception.

However, it’s not just the tunnel-vision of the authorities searching for a suspect in the film that bothered me. It’s the all-too-accurate portrayal of how alleged “victims” are often blindly given the benefit of the doubt. Some of the scenes are darkly laughable as Nick’s absolutely psychotic wife spins lie after lie while FBI investigators nod and commiserate with her.

Without starting a shitstorm on issues like rape, it still needs to be said that alleged victims should not always be taken at their word. Many innocent people are currently incarcerated in America over cases that amount to little more than “he-said-she-said” trivia. And sure, in Gone Girl, Nick ends up with a (using this very loosely) “happy” ending. But it’s not always this way. People like Lisa exist. People like Gemma exist. And yes, people like the fictional Amazing Amy Dunne, most certainly exist.

So take this message away from Gone Girl: if it’s the media’s job to report factual information, and the Criminal Justice System’s responsibility to find the pure, unadulterated truth, we have a long way to go as a country.

At least the entertainment of Gone Girl isn’t affecting the lives of real, innocent people.