Posted On December 21, 2014 By Hunter Simmons In Movies

Hobbit Ends with An “Eh…”

I still have yet to find the words to describe it, but Middle Earth is, in my humble opinion, an unrivaled fictional world. Tolkien immortalized his literary prowess with The Hobbit and The Lord of the Rings, which was only confirmed a decade ago with the popularity the film series put together by Peter Jackson.

The release of The Hobbit films over the past three years has gotten me incredibly giddy, and I will start by saying that I am thrilled that this saga did not go the way of the Star Wars prequel revamps. (J.J. Abrams could direct Episode VII in his sleep better than George Lucas ever could.) This is not to say that The Hobbit films are perfect. What we get in The Battle of the Five Armies is a lackluster effort to finish a film while simultaneously keeping fanboys and fangirls everywhere content with a clear bridge to The Lord of the Rings series. I will try to keep this review as spoiler-free as possible. 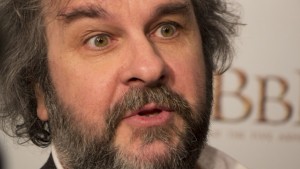 I am not sure whose decision it was to expand this book into three separate parts, but BFA would have been better off as a two-part movie. Sure we get a huge battle sequence throughout most of this film, but nothing new or unique is brought to the table. Smaug’s inevitable demise could have at least been drawn out a lot more, because in it’s current state, it would have fit much better at the end of the second film (and would have given greater meaning to the word “desolation”).

The attempt to create development around the main battle was a noble effort, but came up just short. This usually came in the form of links to the LOTR series, such as Gandalf’s and Saruman’s encounter with Sauron, or Legolas’ future after leaving the Woodland Realm. These were briefly distracting, but not enough to make me forget that other than the main battle, nothing was really happening.

I’m a big silver linings guy, and the silver lining with this final Hobbit installment is that there is never a dull moment. It is a bit paradoxical, I know, but Jackson truly knows how to make a lot of things happen while nothing is happening. For its entertainment value, BFA is a good movie. As a LOTR fan, my expectations were not met. All of that superfluous stuff that Jackson threw in only became more and more of a distraction from the heart of The Hobbit.

Now for some grades:

Watch this final installment of The Hobbit, and then go watch Fellowship, and you would be amazed how much more energy Gandalf has in the latter. I’m not an idiot, McKellen is obviously much older, but still, these are now two different characters. McKellen did the Gandalf-iest stuff that he could do, but it simply did not help the pace of the movie any more than he used to.

This could be an A, but that is not entirely Freeman’s fault. The quirkiness that we fell for in the first two movies simply did not show up in this one. There were a couple moments, but ultimately, the namesake of this film seemed more like a character in the periphery than the center of attention.

I’m still trying to figure out how he was able to overcome the dragon sickness all on his own, but Armitage probably displayed the best range out of the entire cast. Some of the best moments of this film were watching Thorin struggle with his near-genetic greed and the efforts of redemption throughout the entire movie.

Photoshop as you wish…

If there were less big names than are already listed for this movie, then this grade would be much lower. The supporting cast suffices throughout the story, but was indeed shaky at times. For example, the disgruntled ties between Bard and Alfrid (Luke Evans and Ryan Gage, respectively) were an effort at some sort of subplot, but once again failed to distract the viewer from the very short main plot underscoring this movie.

As a fanboy, I say thank you to Peter Jackson for carrying on the legacy of The Lord of the Rings. I have no regrets, but I was not entirely satisfied with this final installment. Still, for cool action scenes and LOTR film closure, The Hobbit: The Battle of the Five Armies is a worthwhile watch.