So like usual I’m thinking about how terrible this Batman/Superman movie is going to be, and something hit me just now that made it even more depressing. Young people that watch this as their first Batman or Superman movie are going to walk away with their perspectives of these characters forever cemented in their minds. There will be children who in 15-20 years will say “Ben Affleck’s portrayal of Batman is the only true Batman”. It’s like we have a chance to stop young Hitler, and we’re just sitting here waiting and saying “Ben Affleck isn’t that bad. Give him a chance” -Trey S., hardcore batman fan. 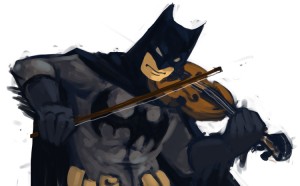 I have been a fan of Batman for as long as I can remember. I currently have two pairs of Batman pajamas, a moderately sized collection that includes books, cards, graphic novels, posters and figures, a well defined opinion on Adam West’s Batman (effing hilarious), and a Bat symbol tattoo that is freaking awesome, even though it needs a touch up.

In college, I made a friend who was even more of a fan than I am. We spend quite a bit of time discussing with the movies, and whenever a new movie was announced featuring Ben Affleck as Bruce Wayne/Batman, I knew whom I had to take my frustrations to. Below is an interview with that friend, Trey, who I feel like words my feelings about this Ben Affleck as Batman perfectly.

CD: Alright, well the first question is simple; Who was your first Batman? And of course, please feel free to go into detail about how obsessed you were as a little kid and all that fun stuff.

TS: My first Batman was Michael Keaton. I also was big into the animated series as well. But yeah as far back as I can remember I was always a huge Batman fan. When I was little my mom made a cape for me, I had pajamas that looked like the Batsuit, I had dozens of Batman action figures including his various allies and villains. When I was maybe 6 or 7 (I can’t remember the exact age) I had a Batman themed birthday party where my parents hired an actor from one of those party companies to come act as Batman. I wasn’t too big into the comics as a kid; I read some, but I didn’t have money of course as a little kid, so I only occasionally got comic books when I would go to the store with my mom or something. I really didn’t start reading a lot of comics until I got older. 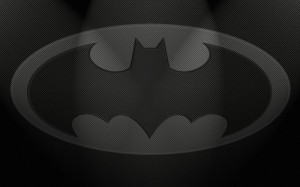 CD: So judging by the extent of your Batman fanaticism, you must have a lot of opinions about the character and how he’s portrayed – who, of the actors who have played him so far (Adam West, Val Kilmer, Christian Bale, etc.) have stayed truest to his character?

TS: In my opinion Christian Bale is the best. Adam West’s Batman is funny, but only because of how silly he is. The one criticism I hear about Bale’s version is the Batman voice. I actually don’t have that big of a problem with it. It makes sense for him to hide his voice especially when he’s talking to people like Gordon and his love interest who would likely recognize him by it. The only time it’s dumb is when he’s using that voice to talk to Alfred or Morgan Freeman who already knows his identity. I also went back and re-watched the trilogy recently and when you watch them all back-to-back, the voice actually gets worse with each movie, and in the first movie it’s really not too ridiculous. I understand the criticism but I think everything else about the Bale version of Batman seems solid. He’s got the whole billionaire playboy thing down better than most, he’s actually in the physical condition that one would need to be in to do what he does (I’m looking at you Adam West, Val Kilmer, George Clooney, and Michael Keaton), and overall I think he’s just a much better actor than previous Bruce Waynes.

CD: That’s great. So now we get to the meat of the matter…the new Batman film, which stars Ben Affleck as Bruce Wayne…before we get into why there’s a problem, let me start by asking if you have anything against Ben Affleck personally.

TS: I don’t have a problem with Ben Affleck personally. I mean I don’t know him, and I’ve never heard anything about him being a bad person in real life. That being said, though, I think he’s a terrible actor. Like, really bad. Really.

CD: What makes you say that? Again, refrain from referencing his upcoming Batman movie. I want to save that for last.

TS: Well, Daredevil is the obvious example. It’s pretty well-accepted that he really sucked in that. I know that there are other factors besides him, like the script and the direction, but he still sucked. I think the first movie I ever saw him in was Armageddon, and I didn’t like him in that either. He just has that quality where, when you look at him, he always has this stupid, blank stare. You ever meet someone and talk to them, and when you look them in the eyes it just seems like there’s nothing going on in there? Well that’s the impression I get with him when I see him in movies. Like a Keanu Reeves vibe, except Keanu made some good movies. 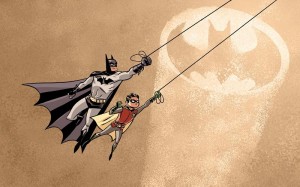 CD: And obviously, that connects with his Batman movie. With the Batman mask, all you can see are his eyes and his mouth, so expressive eyes are a pretty important quality.

TS: Yeah for sure. I mean his eyes were covered in Daredevil, and I’m not ruling out the possibility of that being a main reason he was even able to land that role. He also wore masks in parts of The Town and he directed that. Even he knows that people don’t want to see his face or eyes.

CD: So then besides the dead eyes, what has you so convinced that he’ll make a bad Batman?

TS: Just the acting in general. Of course once he’s in the suit it shouldn’t be too bad, but he’s going to have to act when he is just Bruce Wayne. There will undoubtedly be multiple cringe-inducing scenes of him trying to act like a yuppie, business mogul, and ladies’ man. That’s what made Christian Bale so good as Bruce Wayne, because he could do those things. One of his most famous movies is American Psycho where he plays a wealthy executive, and he crushed it. If you replace going out at night and murdering people with going out at night and fighting crime, then American Psycho would have been a Batman movie. I just don’t think Affleck has the traits or talent to pull it off successfully. Bruce Wayne has to be likable.

CD: I totally agree. Last question; what are your opinions about young people seeing Ben Affleck as their first Batman? What affect do you think he will have on the narrative as a whole?

TS: Yeah that’s something I really have an issue with. Like I said before I’m a huge Batman fan and I really do not like Ben Affleck as an actor; so it troubles me that an entire generation of children and young people are going to experience Ben Affleck as their Batman. I grew up with the cartoon, and a series of different actors playing Batman in live-action films so my experience is different. The way movie franchises work now is depressing. We all know that this Batman/Superman movie is going to be a lead-in to a series of movies that I assume will begin a series of Justice League movies. We see this with Marvel. For example Robert Downey Jr. has been Iron Man for years, and will continue to be Iron Man for the foreseeable future as they are making at least 2 more Avengers movies. Luckily the casting in the Marvel movies has been great, and RDJ is perfect as Tony Stark/Iron Man. If DC follows the wildly successful Marvel model, then Ben Affleck will be Batman for at least 6-8 years as they make Batman/Superman movies, maybe solo Batman movies, and then eventually the Justice League movies. The bottom line is we will be stuck with Matt Damon’s coattail rider for a long time. The casting is downright irresponsible really, and I haven’t even brought up their choice of Jesse Eisenberg as Lex Luthor. 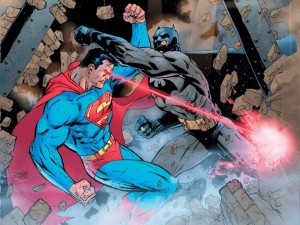 TS: Well I’m not as big of a fan of Superman as I am Batman, but Jesse Eisenberg is going to be horrible as Lex Luthor. In my opinion he is also a terrible actor. He’s just been able to cash in on the trend in entertainment to have awkward characters in lead roles, like Michael Cera. Michael Cera is good at what he does though. A character like Lex Luthor, while evil and a villain, needs to be charismatic. He’s a successful businessman and he is able to command authority. All the good super villains are likable on some level. Heath Ledger’s Joker is a great example. Like most people I’ve talked to, I often found myself rooting for the Joker during The Dark Knight. Jesse Eisenberg is just completely unlikable. On top of that he looks nothing like Luthor and he’s too young to be playing someone of the stature of Lex Luthor. He just can’t put forward that confident, powerful vibe that a villain needs without looking like a total douche. How is he supposed to take on Superman and Batman when he needed the help of a washed up actor, Gwen Stacy, and a 12 year old to kill zombies?

Caitlyn Davis is a writer for Writtalin. A recent graduate of Sam Houston State University, she’s trying to start a career in editing and publishing. To get the bills paid, she works as an editor for a small time publication in Dallas, and in her free time likes to eat, write, and go on adventures with her recently acquired Blue Ferret (yes, there’s a story there). She has a small obsession with Harry Potter, a large Batman collection, and considers herself an amateur foodie with a love of red wine and craft beer.