Posted On December 5, 2014 By Hunter Simmons In Movies

Kudos to AMC for adding those leather (pleather?) recliners I have come to love in my movie theater-going experience. The ticket markup, though excessive to the uninformed visitor, is negligible. Just make sure you eat a cheap meal before you visit, and you’re all set. However, I feel like I truly threw my money away with the latest Hunger Games installment. Was it a terrible movie? Nah, but yikes there was a ton of unnecessary footage in there.

After some extensive* research on the book series, I learned that the actual length of the third and final novel is right around the same length as the first two, yet the finale gets Part I and Part II? I’m sure Suzanne Collins‘ fan club feels jilted in only receiving a single, full-length film for the first two, but c’mon. You could literally sum up Mockingjay, Part I in about 30 seconds before the premiere of Part II, and everyone would be on the same page.

Let’s just quickly go through the short list of highlights. One, it was eerie, yet cool to watch Philip Seymour Hoffman posthumously, despite the fact that this role is not even on the radar of his top accolades. Two, Woody Harrelson is probably the best thing that happened to this series in terms of one-liners. Three, it was only two hours long. 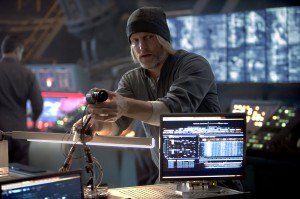 Thanks, Woody, for reminding me to laugh in this one.

None of this excuses the fact that this movie was simply superfluous. What does not help is the fact that the previous two films balanced (albeit) mild character development with a decently rhythmic action plot. Now imagine a similar movie with little to no action, coupled with repetitive reminders about how whiny and undetermined the lead characters are.

I honestly feel bad for Jennifer Lawrence. (Not really, but hear me out.) Compared to her work in movies like Silver Linings Playbook and American Hustle, Katniss Everdeen is simply not compelling. With the exception of Harrelson and Donald Sutherland, it feels like everyone is abashedly overacting. Even with the easy stuff: there were distinct lines that were designed to be, erm, funny? Yet the delivery of even the easiest line of comic relief came across as deflated. 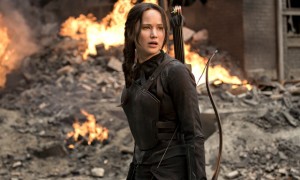 Just a whole lot of “eh” in this one.

Hopefully those “readers” out there will flurry in and tell me I’m wrong and misguided, but from the laymen’s perspective, this movie was, for lack of a better word, boring. The simple takeaway is this: If you are the director of a wildly successful trilogy, why settle to reach the $100 million mark on opening weekend when you can make that same amount twice by splitting the finale?

*Not extensive. At all.