Posted On October 5, 2014 By Kelli Johnson In Lifestyle, Miscellaneous, Rants

On Growing Up in the Worst City in America

If you were to Google the burgeoning metropolis of Bakersfield, California you would find it is known for many things.

Aside from carrots and Buck Owens, Bakersfield has made quite a name for itself as having the worst air quality, the most illiterate citizens, and the place where lost phone calls (and hopes and dreams) go to die, due to terrible cellphone reception.

Either Forbes just hates Bakersfield or it really is a barren wasteland pretending to be a functioning society.

But for me, Bakersfield has always just been home.

It’s no secret that Bakersfield is awful. On the playground, we used to daydream about the beautiful places we would go some day when we weren’t trapped on the surface of the sun.

Because it’s true. Bakersfield is 100,000 degrees nine months out of the year. A “white” Christmas for us was really just a thick layer of smog that no sooner after settling in the valley would settle into our lungs.

Between puffs of my inhaler, I made a wheezy promise to myself that some day, I would leave this place and never come back.

Bakersfield isn’t HUGE, but I was unaware, until I moved away for college, just how much its reputation had preceded itself.

Introducing myself to my new, cool college friends went something like this…

And to be honest, the reactions (of horror, sympathy, and everything in between) I received after telling people where I hailed from really hurt my feelings.

So I did what any normal person would do.
I lied.

When people started asking me where I was from, I started naming the first place that came to mind.

My hometown became Minneapolis and Portland and the mysterious “Bay Area.”

Until I actually met people from those places and then I realized the jig was up!

And then I became sad for an entirely different reason. I was so worried what these people thought of me that I was willing to throw away my roots. What if Leslie Knope decided she was ashamed of Pawnee and just gave up on it altogether?! 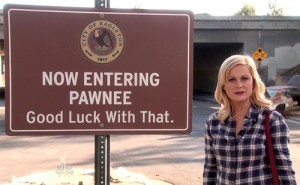 Because yeah, Bakersfield is hot.
And we can chew on the air we breathe.
And I’ve been waiting for this text message to send for two days now.

But at the end of the day, this is my home.
No matter where I go, Bakersfield will always be a part of me.

And to be honest, I would be lying if I said that I didn’t love it, because I really do.

Bakersfield is like that crazy aunt everyone has that gets drunk at the Christmas party and starts telling embarrassing stories.
You can either be ashamed and hide in the other room.
Or you can pour yourself a glass and join in.

You can’t change where you’re from, but you can love it and embrace it for all it is.

So cheers, Bakersfield.
You’re one hell of a place.