Posted On April 27, 2014 By Staff In Dating For Men, Dating For Women, Girlzone, Rants

A Petition to Abolish Texting with Love Interests

I firmly believe that when it comes to dating, texting is the actual devil. It is the demise of dozens of relationships and one text can be a game changer for countless others. One text can keep someone up all night in a ball of anxiety, and one vibration of a phone can send someone into a nervous tizzy. If it were up to me, texting would be strictly for use between friends. And not the, “Oh my god, I’m so not into him at all,” friends, I mean actual life-long platonic friends. And select family members. I could completely get behind a law that makes texting between love interests/significant others illegal. And so, in hopes that Congress and President Obama* will put aside the important issues of our nation and see this article as gateway for change, I have outlined the main reasons I think texting should be abolished between significant others in the following carefully worded and thoroughly researched document.

*Everyone relax, I’m obviously kidding. I understand war is more important than texting. Calm down.

You can’t get to know a new love interest via text.


This theory is best proven by first dates with people met on a dating site/app. So many people will “meet” someone on OkCupid or wherever, swap phone numbers, and begin about a week long texting relationship. They’ll exchange sarcastic comments and say to their friends, “This guy/girl is so perfect for me!” as if they actually know each other. In reality though, you can’t see the twenty minutes it takes the guy to come up with a perfectly witty response or the five minutes it takes the girl to Google your favorite band’s most popular single to subtly drop in conversation. I once met someone I believed to be a great guy on Tinder (in retrospect, the phrase “great guy” and “Tinder” will probably never go together, but hey, live and learn). We exchanged numbers and began texting. He was super funny and clever, and we seemed to have everything in common down to our favorite coffee shop. However, upon meeting for drinks in person, I quickly learned that his witty comments were all actually extremely rehearsed and his snarky responses didn’t come as quickly when he didn’t have time to sit around and think about it. I was disappointed, and realized the person I’d been texting with was actually just a well-practiced version of a somewhat attractive male that didn’t exist in reality. Now, if we’d just spoken on the phone from the beginning, I probably would have learned all of these things before wasting my time on a date. And maybe I wouldn’t have deleted my Tinder. Okay, well I probably still would have because Tinder is also the devil, but you get the point.*

*While we’re at it, can we look into getting Tinder abolished as well? Thanks.

Texting creates much unwanted/unneeded anxiety in a new relationship.

Upon meeting someone new and exchanging numbers, an anxiety filled few weeks of misery ensues. When is he going to text me back, should I text him first, should I respond right away or wait a little, what does he mean when he says “I think so”, why is he texting me so much? These questions plague the mind of the new dater like…a plague plagues a person with the plague. Too many texts from a guy too soon can turn a female away, when in reality that guy could be a really great person who just loves their phone. Too many cryptic messages too often can make a girl think a guy isn’t’ interested, when in reality he may just not be into texting. A sarcastic message may come across as serious, and a serious message may come across as a joke. My roommate and I have been debating for about a week now if a guy she’s texting is joking or serious, either making him hilarious or a loon. All of these problems could be solved when communicating over the phone. You can tell the person’s tone, you can much better gauge their interest, and you don’t have to sit around waiting for a one-word answer. Sure, it’s dating, so the anxiety will still be there, but it would exponentially decrease.

If you call someone and they don’t answer, they’re probably busy. They’ll call you back. If they don’t call you back within in a reasonable amount of time, they’re probably not interested. If someone calls you and you miss the call, you can call them back. If you don’t want to call them back, you’re probably not interested. There’s no, “Maybe the text didn’t go through,” because when you hear the phone ring, you’ll know the call went through. There’s no need to sit around debating if you should double text, because you already called once and if it didn’t go straight to voicemail, you know they got the message. And yes, I see how there can be loopholes of questions and anxiety with the phone as well, but my point is it would be so much less stressful if texting were eliminated.

Your friends won’t hate you.

You know when your friend is dating someone new and she is constantly on her phone texting said person? She doesn’t hear your questions because she’s concentrating on texting and she’s on her phone the entire time you’re at dinner. If two people would just call each other, they could have a chat for however long they like without disturbing others. If someone is out with friends, they could say, “Hey I’ll call you back,” rather than, “Hey, let’s text about our favorite food for an hour while I’m also trying to pay attention to my friends.” Talk on the phone for however long you like, I could care less. Just do it in private. If texting with your significant other weren’t allowed, we’d never have to deal with distracted friends. Now, imagine THAT. 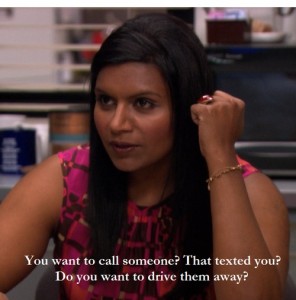 Talking on the phone wouldn’t have to mean as much.

These days, when a guy calls you, you know it’s getting pretty serious. Either that, or he’s a keeper. But if texting weren’t allowed, calling someone wouldn’t have to mean as much, and people wouldn’t be as afraid to do it. And let’s face it, talking on the phone with someone you like is fun, and we all want to do it more. DOWN WITH TEXTING.

In conclusion, Mr. President and members of Congress, I hope you can now understand why this is a vital issue effecting people around the world, and it needs to be addressed immediately. Now excuse me while I go see if that guy has texted me back yet.*

*Just kidding, I have no guys texting me, so JOKE’S ON YOU!