Posted On March 28, 2014 By Renée Rapin In Buzzworthy, The Scene

Circus Elephants Run For It

Earlier this week, three elephants escaped the circus in search of a better life. The creatures were fed up with low wages and long hours, so they packed their bags and made a run for it like jail birds.

The elephants damaged several cars as well as the circus venue door, but they sadly didn’t make it very far, as they were quickly captured in the parking lot. The handlers claim the elephants are now comfortably resting in their cages. Yeah right. You know they are plotting their next escape and planning for the ultimate breakout.

Hopefully their next escape plan is well thought out…

I’d really like to chat with the hiring manger for Obama’s Secret Service. First, they’re caught with hookers, then they’re misbehavin’ and sexually harassing people and now they’re drunk and passed out in hotel lobbies. So, what exactly are the requirements for this job? Seems like they’re letting anyone in to protect the president these days. Apparently Obama was in the Netherlands recently and his Secret Service embraced the Amsterdam culture a little too much, and 3 were found in the lobby of their hotel completely drunk and passed out. But don’t worry, the President is fine. The 3 men were sent home instantly. Apparently the force is working hard to regain its reputation with the American people. Good luck with that one guys. America’s view of the Secret Service.

The agency has put new procedures in place in an attempt to end the “male-dominated hard partying culture of the secret service.” So…the secret service is basically a grown-up fraternity? Am I understanding this correctly? I wonder if Hillary Clinton were to be elected if she’d change it up and have her sorority girls protecting her. And the White House is basically…Animal House? Sounds like a sweet place to work to me!

Twelve year old Katie Frances of Oklahoma beat the record for selling the most girl scout cookies. She sold 18,107 boxes in 7 weeks. The previous record was set in the 1980s for 18,000 boxes. But Katie isn’t a newbie at this; she sold 12,428 last year. 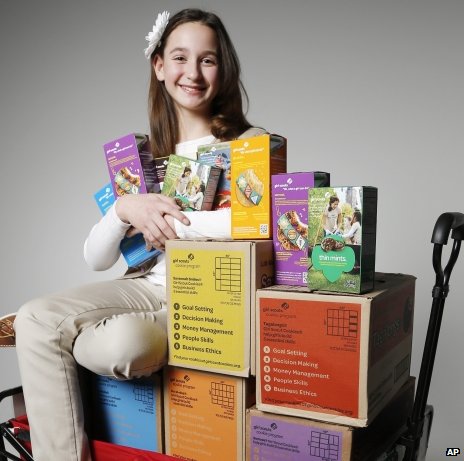 Damn girl. I think I only sold maybe 40 boxes when I was a puny girl scout. Katie explains her business model, “There are three ingredients to the cookie sale: It takes a lot of time, commitment, and asking everybody I see.” Kinda sounds like one of those petition people that stand outside Target bugging everyone. I’d really like to know the backstory to all this. There’s gotta be a hidden secret as to how she sold all of those cookies. Exporting to Europe? Canada? I don’t trust those green vests one bit.

Man Gets Spider Tattoo To Confront His Arachnophobia

Eric Ortiz is really not a fan of spiders. Just the sight of one makes him run in fear. But Ortiz decided it was about time to get over his fear. So he had a giant spider tattooed on his body…specifically, on his face.

Ortiz explains his reasoning for the tat, “Everybody looks at it, ‘Damn spider’, ’cause if you’re going around your house, you know what I’m saying, you see those spiders, you’re going to jump, you’re going to jump, so putting one on my face, I say you know what, I’m going to see what people think.” Um…what did he just say? Apparently his girlfriend dumped him shortly after he got his tattoo. However, Ortiz also has charges of burglary, domestic battery, possession of an illegal substance, theft, loitering, etc. So, I’m surprised it was the tattoo that made her leave…