Posted On April 20, 2014 By Anthony Kozlowski In Television

While everyone is rehashing the latest episodes of Mad Men and Game of Thrones next Monday, I’ll be embarking on quite a different adventure.  April 21st marks the return of Cartoon Network’s cult animated series Adventure Time, which will be entering its sixth season.  Full of frenetic characters and colorful fantasy locales, it’s easy to see why the show has been such a phenomenal success with the network’s preteen demo, but that’s not all this wacky cartoon brings to the table.  In fact, it’s difficult to describe its appeal without sounding kind of crazy.  Imagine if Where the Wild Things Are was penned by Cormac McCarthy, or if The Last Man on Earth were sugarcoated and painted with vibrant watercolors. It’s a post-apocalyptic allegory that cares more about finding its main character a girlfriend than exploring its dark past. It can be enjoyed at increasing depth by practically anyone, whether they be 6-years-old or pursuing their Masters in Molecular Biology.  Putting aside the fact that I’m already a foaming-mouth fan, Adventure Time is quite simply one of the most probing, philosophical and often emotionally affecting shows on television.  Treating oneself to an 11-minute dose will likely result in more laughs, tears, and existential quandaries than anything the major networks can deliver in an hour. 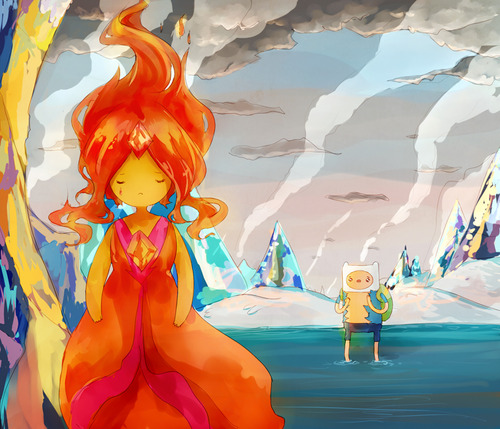 Let’s see you give us this much feels, NBC.

I probably sound like the fanbase of any pop culture phenomenon (looking at you Doctor Who), but my steady revelation of Adventure Time‘s genius took a good 4 years and 5 seasons to reach fruition.  It follows the adventures (duh) of Finn the Human and his best friend/brother Jake the Dog through the fantasy land of Ooo, complete with magical candy people, wizards, talking piñatas, a Southern belle elephant, and basically anything else your mind can conjure. If you’re in grade school, this world probably looks a lot like the inside of your brain – a young boy and his shapeshifting id fight monsters, save princesses, and interact with all manner of off-the-wall characters. The child and his unhinged animal counterpart plays a lot like an internet generation Calvin and Hobbes, except Susie Derkins is a princess scientist made of bubblegum.

When it first debuted, the show hued very closely to this formula. Finn and Jake’s totally mathematical adventures were mostly a string of colorful non sequiturs with the occasional piece of sagely advice  or fart joke thrown in for good measure. But as the seasons rack up, Adventure Time takes its material in a decidedly dark, affecting direction.  The effervescent world full of candy and wonder has a terrible history.  We learn – however implicitly – that Ooo is actually a post-apocalyptic Earth wherein a mysterious “Mushroom War” laid waste to our civilization and – as a grave voice-over informs – virtually everyone was killed or mutated by “frightful bombs poised to bathe the land in mutagenic horror.”

Finn is the last human for Glob’s sake.

But it doesn’t end there. Many of the other characters have their own disturbing backstories. The sociopathic Ice King was once Simon Petrakov–a mild-mannered archaeologist–until a magical crown robbed him of his sanity and his fiancée.  Marceline the Vampire Queen–along with Simon–is one of two beings to survive the war.  When she was only a child, Simon protected her from mutants in the post-war husk of our world, which he no longer remembers as the senile, cackling Ice King.

While the through-running plot line remains focused on Finn’s coming of age (he’s the only character who gets older as the series progresses), the massive ensemble allows for continual expansion of peripheral characters, enriching Adventure Time‘s universe.  We get to know a vivacious, gender-neutral video game system named BMO; a nihilistic Martian called the Magic Man who takes a childlike glee in chaos that would creep out the Joker; the Candy Kingdom ruler and Finn’s one-time flame Princess Bubblegum, whose grip on her realm becomes arguably despotic as the series progresses; and the heir to the Fire Kingdom, Flame Princess, who seeks to define herself apart from her categorically evil father, among others. As the fifth season concludes, these separate threads weave together into a quilted mythology that promises to reach a pinnacle in Monday’s premiere.

This seems like a lot for a show whose episode descriptions sound like excerpts from a fifth grader’s journal. Take for instance: “Magic Man steals a delicious sandwich that Jake created, and Finn must defy the laws of space and time to get it back.”  But its jaunty, lighthearted foreground is the heart around which the story is built.  In interviews, series creator Pendleton Ward states that his childhood obsessions influence a lot of Adventure Time’s world.  Growing up a huge fan of “Ninja Turtles” and tabletop RPGs like D&D, Ward and his writers focus first and foremost on keeping Ooo a fun, magical place for the young and young at heart to visit.  In an interview with AV Club, Ward explains that a lot of the fun dungeon crawling aspects of the show come directly from campaigns that he and the writers would love to play (if they had the time).  Mix that with his other influences including the films of Hayao Miyazaki and the unapologetic humor of Mike Judge, and the result starts to look a lot like Ooo.  It is a world of life, humor, and wonder despite the fact that civilization as we know it was long ago destroyed. 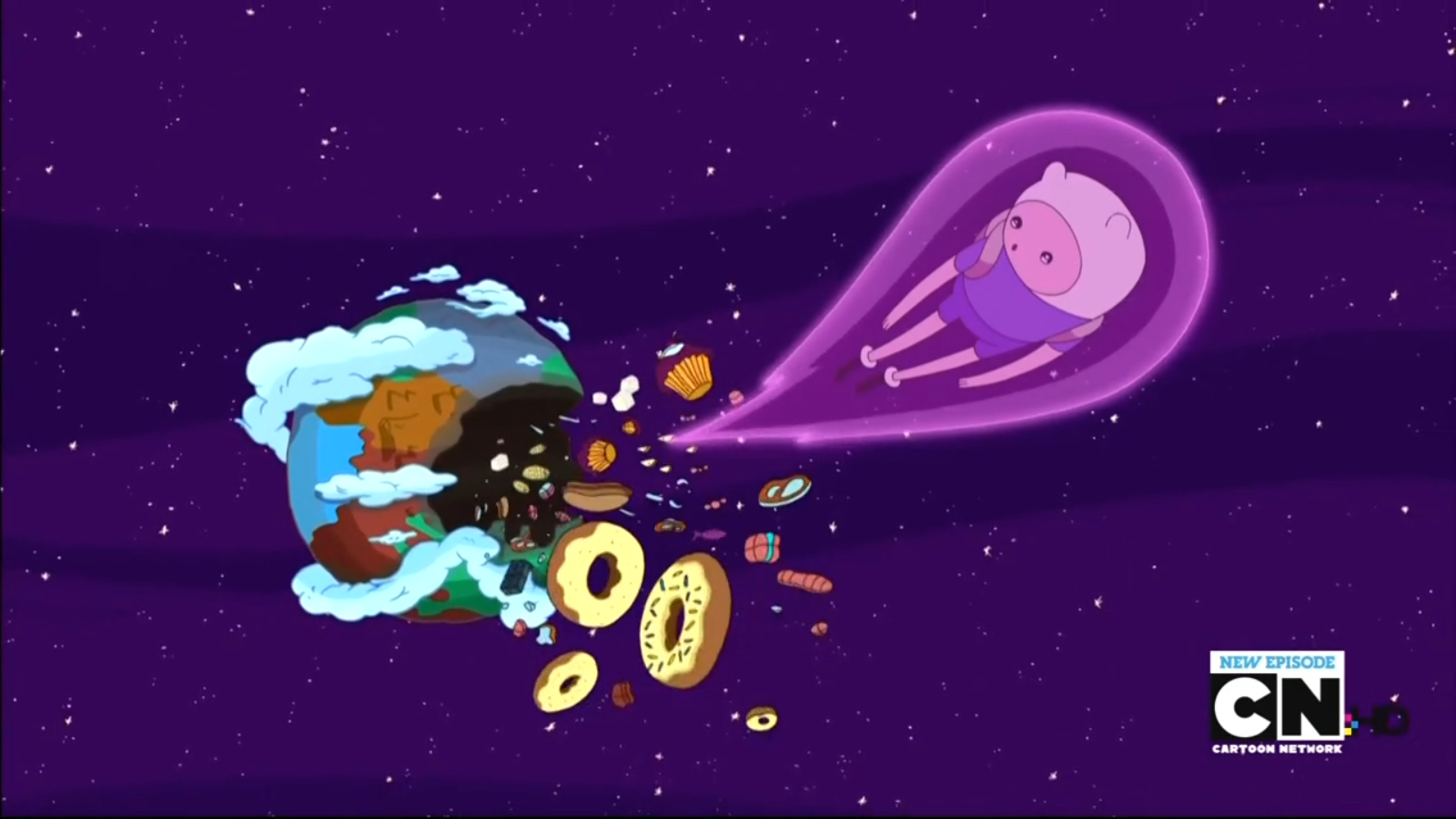 Magic, donuts and a blown-up Earth.

This is perhaps the most powerful of Adventure Time‘s existential ponderings: what do you do when your story has ended?  Though the only traces of humanity lie in the crumbling ruins and abandoned technology that dot the landscape, life presses on. And for the most part the world is better off. Finn may be the last human, but he still hangs with his bro, dungeon crawls like a champ, and worries about his love life (or lack thereof).  He tries not to think about his predicament because he tends to get “soul-searchy,” but for the most part it doesn’t prevent him from leading a totally mathematical life.

On the other hand, the current fare of post-apocalyptic shows on TV, including The Walking Dead and Falling Skies, tends to lean morose. Ward doesn’t shy away from the more horrible aspects of Ooo – including a Lovecraftian monster that sucks souls and Finn’s skeletal nemesis, the Lich – but doesn’t let them overpower the narrative either. He has often said that his favorite emotion is saudade, or the feeling of simultaneous happiness and sorrow. If that doesn’t describe the rich amalgam of Adventure Time, nothing does. 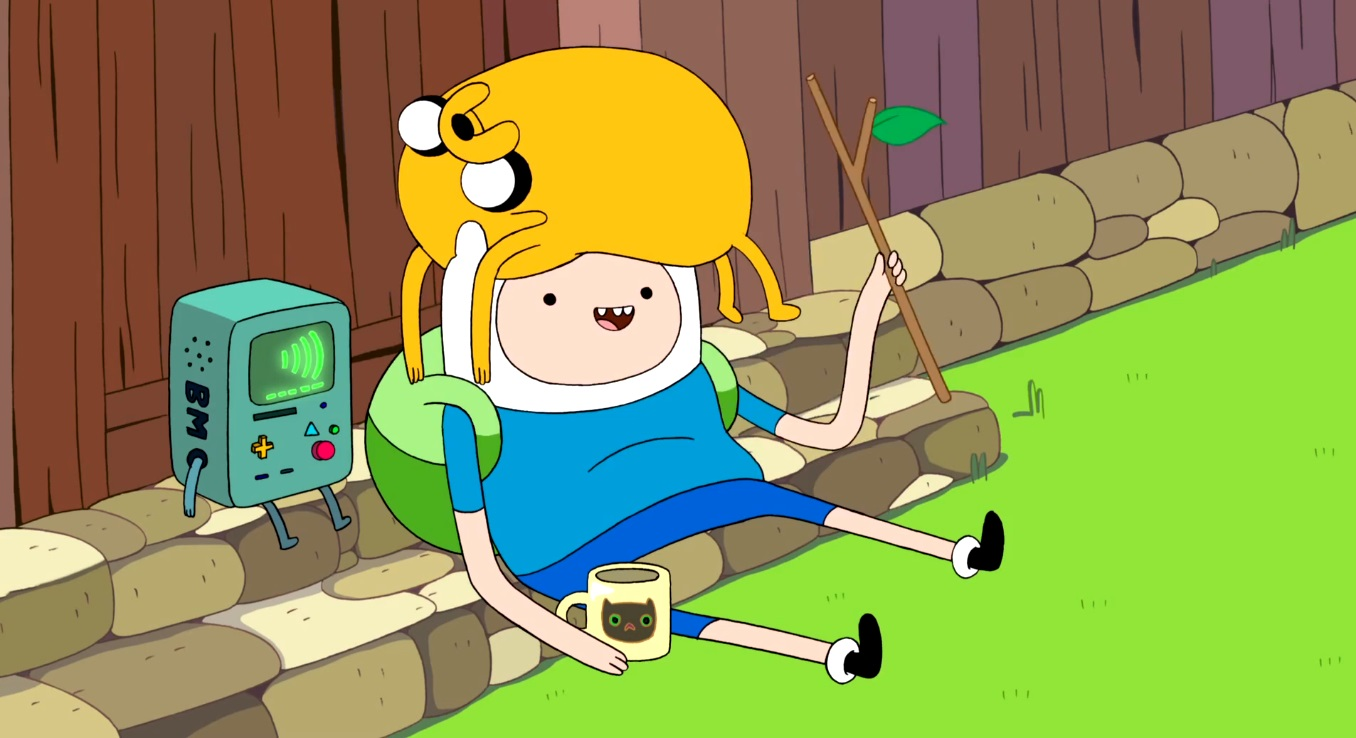 Dying worlds don’t matter as long as you have your buddy.

Even peripheral characters espouse this ideal. In the episode “BMO Lost,” Jake and Finn’s plucky computer finds itself on an Incredible Journey-type adventure after getting snatched by an eagle. The road home is wrought with all manner of colorful characters including a pink baby – that BMO thinks looks like a “Ricky” – and an affable Bubble (voiced by LaVar Burton) who suggests that BMO wait for a predator to come and eat them. But the intrepid little video game presses on, braving forests, rivers, wet batteries and a howling monster in the distance. It’s all trivial fun until BMO and Bubble arrive back at the treehouse. Bubble confesses that he’s fallen in love with BMO and asks it to marry him. No sooner does the heartfelt proposal leave his mouth than Jake opens the door and playfully and unceremoniously pops Bubble. BMO is immediately brought to tears, which Finn and Jake interpret as an act. In a matter of seconds, Adventure Time unleashes an emotional whirlwind, which it shrugs off just as easily. It suggests that the lives of its characters are just as arbitrary as the non sequitur jokes and plotlines thrown into the mix. And really, that’s all life really is: short, cruel and cosmically hilarious. If we don’t learn to laugh at the darkness, how can we enjoy our brief, insignificant existence?

Of course this may be a bit to swallow for the uninitiated. Like many anecdotes, a lot of Adventure Time has a “you had to be there” feel to it. But that’s part of the show’s inherent appeal. Like childhood, it’s beautiful, insane, and quaintly poetic, often in ways that can’t be described. The impossible phantasms it conjures though are immediately relatable to anyone who used to swing a stick in their backyard, pretending to slay monsters.  With the first two seasons available for streaming and at 11-minutes a pop, it’s not that hard to get in on the joke.