Posted On April 19, 2014 By Kelsey Darling In Dating For Women, Girlzone

Remember middle school boyfriends?  It’s just like that only no braces, better clothes and communication, and more confidence.

He’s not asexual.  He’s not a virgin or a priest.

What does that mean?  Well, like other unfun religions, Mormons do not endorse premarital sex.  So that leaves us with a few choices.  We could get married, break the rules, or not have sex.  Since marriage is forever and breaking the rules would mean going against his beliefs, one of us chose the Not Having Sex option.  That person was not me.  By choosing this relationship, I agreed to that standard, but only in the way that I would choose death by starvation over a lifetime supply of Taco Bell – NOT enthusiastically.

I respect my guy and his no-sex beliefs, but being involuntarily celibate is like traveling back in time to the virginal nightmare I was stuck in for 21 dry years. Okay, so only the last 4 were actually awful.  The other 17 were pleasantly childlike and full of “Ew, penis!” mentality.  Still, virginity has a socially acceptable expiration date and I was pushing it.  Now that I’ve finally made it past that obstacle, it’s like I’m trying to regrow my virginity as if it were one of those grow-your-own crystal garden kits. 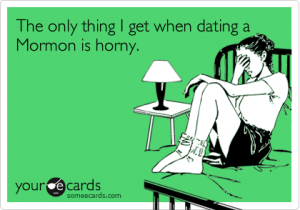 In the Mormon culture, there are a few helpful tips that help the youth keep their horniness in check:

1. Keep the lights on. (Being awkward and self-conscious is the best birth control?)

2. Don’t allow the opposite gender in your bedroom. (Temptation!)

3. If you wouldn’t do it in public, then don’t do it at all. (What about the slim number of Mormon exhibitionists?)

4. The 3-second rule applies to kisses. (But we get 5 seconds for food on the ground.)

5. Don’t lie down on top of each other. (All the better to feel your boner, my dear.)

Although we don’t follow these tips, we at least keep it relatively PG-13.  A little dry humping and some under-the-shirt fondling may or may not be in play.  But despite these mini-rebellions, celibacy looms like the two-year-old in Honey, I Blew Up the Kid.  That dick.

Not having sex at this age, in these perfectly good sexually active days, seems crazy.  It feels crazy.  So why do I do it?  Because I like him!  And when you like someone, you make stupid compromises like keeping penises out of vaginas.

It’s been tough, but I’m perfectly capable of taking matters into my own hands and that’s enough…for now.  When things are looking really desperate, we’ll see if he’ll let me make some kind of Craigslist brother-husband arrangement (we are in Utah, after all), or at the very least, buy me a promise ring.