Posted On February 17, 2015 By Basic Becca In Television

We pick up right where we left off last night— Britt’s meltdown and the impending rose ceremony. But first- a date with Becca that maybe never even had a date card. They talk on a couch in a loft and hold hands awkwardly. Becca has never been in love; never even had a serious relationship. Then they go to the roof and watch the sun set over Iowa. The end.

As Kaitlyn (already in possession of a rose), Britt, Becca, Carly, Jade, and Whitney prepare for the cocktail party and talk shit about one another, Chris confesses that it “feels like things are falling apart between [Britt] and [him].” Meanwhile, Britt tells the girls that she feels like shes going to leave before the rose ceremony and there’s nothing he can say that will change her mind. Interesting that she expects him to change her mind about leaving. She wanted to talk to him about their blow out at the cocktail party, but surprise— no cocktail party; straight to rose ceremony.

Chris opens the rose ceremony with some mumbles about difficult decisions. Britt asks if she can talk to him for “like 2 seconds” which turns out to be much longer than 2 seconds. She is trying to gain Chris’s forgiveness (even though she has her bags packed and wanted to leave that morning), but she ends up defending herself poorly and interrupting the poor guy incessantly. Chris says that he can’t picture her as his wife and sends her home pre-ceremony. Britt sobs in a driveway while wearing a very short dress. Chris sits on a couch and looks kind of sad for a few seconds.

After returning to the remaining five women, Chris thanks the person who spoke out (Carly). Carly does not receive a rose and must be filmed sobbing in a limo and sharing her feelings of being unwanted and questioning if love is real. Advice for Carly: real love is more likely to be found in the real world. I’m sad to see Carly go because I feel like she and I would have been great friends. She has a flare for the sarcastic dramatic flare and would have been a fun hometown date- no doubt. But alas- something good must be coming her way because she’s awesome.

Becca and Chris meet at a park and she warns him about alligators. She shares that she’s never brought a guy home before which lines up well with her never having been in love and being a virgin. She’s either asexual, a lesbian, or just waiting for the right person. I think it’s the last one. 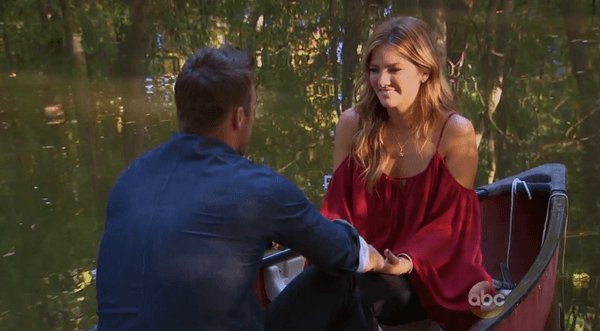 Once at her family’s house, her older sister pulls Chris aside and gives him a speech about Becca not being an intimate person. During his time with her mom, she expressed that it was the first time they’d ever seen her hold hands with a guy and was even surprised that Becca had let him keep his hand on her knee while they were all sitting together. Those two conversations definitely left him with a sense of uneasiness, but then the couple visited the state fair after hours and rode the ferris wheel together. Becca doesn’t know what love feels like, but she thinks that what she’s feeling (lightheadedness) might be a sign of love… or maybe too much wine.

Chris did not ask for permission from her family to propose.

On their last date, Whitney told Chris that she has no parents: her mom passed away and she doesn’t have a relationship with her father. Before going up to meet the family, Chris asked her who she would want to give him a blessing over their possible engagement– she teared up and decided it should definitely be her sister. The two enter a perfectly decorated apartment and are greeted by Whitney’s uncle, grandmother, sister, and brother-in-law. Chris and Whitney’s sister get some time to talk alone. He approaches the subject of engagement to Whitney and asks how sister would feel. Sister responds how any big sister would: I want her to be it, not one of four, so call me when you know that for sure. Chris and Whitney leave without a blessing, but Whitney shares a tear inducing tale about a bottle of wine from Napa that she bought (despite it being out of her budget) to share with the man she knows will become her husband. Chris better propose to her after drinking that wine.

When the rapping finally comes to an end, Chris and Kaitlyn meet up with Kaitlyn’s parents and step-parents. Her mom is worried about her having her heart broken again– apparently recovery from her last break up was quite a process. Kaitlyn assures her that she feels really good about this and that she “hearts” Chris… not quite love but getting there. At the end of the date, Kaitlyn removes a blindfold from Chris’s eyes to reveal a billboard displaying a message for Chris. 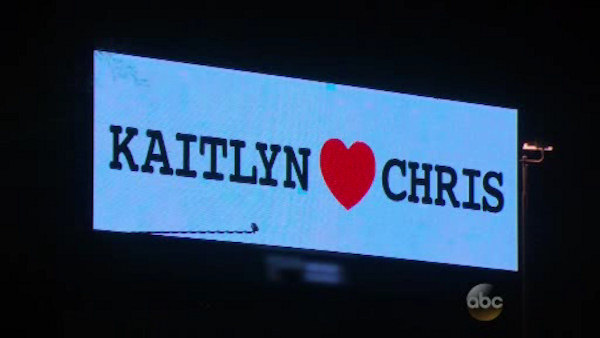 There were no talks of blessings or proposals.

Chris travels to Nebraska to meet Jade’s mom, dad, step-mom, and two brothers in small town, Nebraska. Jade has remained a bit of a bore and a mystery up until this point in the season – we know she posed for Playboy because she told Carly, but until then, she was shy and reserved. Her family definitely gives us a different impression of her: her dad hints to Chris that there is a side to her he hasn’t seen after Chris mentions her “small town values.” One of Jade’s brothers tells Chris that she is a “wild mustang… a free spirit.” Jade sits down to talk with her dad and shares that this process has changed her. He tells a crying Jade that he trusts her heart and her decision and begins to cry a bit himself. Definitely a touching moment that clearly meant a lot to Jade and Twitter.

Now Jades dad just made me tear up. How the hell did I even end up watching this?!?! Dang it @JennyMcCarthy ha ha! #TheBachelor — Donnie Wahlberg (@DonnieWahlberg) February 17, 2015

During their alone time, Jade tells Chris that she has a past that would surprise him. Rather than asking a question like a normal person, he just stares at her. She tells him about her nude modeling and offers to show him some of the photos “if he wants.” The laptop is brought out, Chris tries to expertly hide his boner, and he audibly gulps when the pictures go from risqué to vagina. He clearly wanted to look, but he didn’t want America to think he wanted to look.

In the end, Chris “really didn’t see that coming,” but he told Jade that he doesn’t consider the photos to be a deal-breaker.

Chris is falling in love with multiple women. Hasn’t the world learned that is what seems to happen on this show?

He gives his first rose to Whitney; the second rose goes to Kaitlyn; the third and final rose goes to Becca. Despite the nudes not being a deal-breaker, Jade goes home. Chris tells her that it has nothing to do with the photos– his relationships with the other women are just moving faster. Jade doesn’t know what to say and Chris mumbles something about her being a gift in his life. He might be making the biggest mistake ever, but he’ll deal. Chris walks Jade to the limo and returns with a tear in his eye (probably at the thought of missing out on a fantasy suite date with Jade).

Whitney Bischoff, Becca Tilley, and Kaitlyn Bristowe are the final three. Next week, they’re off to Bali and finally get to spend some time in the sun. Becca needs to tell Chris she’s a virgin. Kaitlyn needs to open up more. Whitney needs to keep doing her thing. It’s very impressive that the final three have all managed to stay out of drama for the most part- they all seem like decent human beings that could contribute to a genuinely successful relationship. Good work, Chris!

Kaitlyn becomes the next Bachelorette.

Becca carries on with her life and finds a great man out in the real world.

P.S. Thank you for this, Eric Stonestreet.