Posted On April 10, 2015 By Jackie Rodriguez In Television

Why Parks & Recreation is Basically Improvisation

Let’s start with Amy Poehler aka Leslie Knope aka my wonderful goddess human being whose smile spreads sunshine and warmth. Amy Poehler is intelligent as all magical beings are. Leslie Knope is intelligent as all magical beings are; we see it in her wonderful ways of pushing forth government bills that her fellow city councilmen try to destroy. Leslie Knope, when told that a girl would be unable to join the Pawnee Rangers because she was a girl, started her own club– the Pawnee Goddesses. Amy Poehler, to fight the rampant sexism in today’s society, started Amy Poehler’s Smart Girls, an organization dedicated to educating females everywhere, and helping them cultivate their true selves without apologizing to the world for who they are. The website Amy currently runs helps these smart girls (who are literally girls anywhere, everywhere) engage in civic activism, cultural exchange, and expression through arts. Which is totally something Leslie Knope would do (and she already has, via the Pawnee Goddesses).

Okay, I think if you’ve seen Parks & Recreation, through its current entirety, you realize Ann Perkins is a beautiful nurse sunfish who can do anything and has all the strengths. Let’s talk about Rashida Jones, a beautiful actress sunfish who can do anything and has all the strengths. Rashida Jones has literally done everything. She’s an actress, a comic book writer, a screenwriter, and she sang with Tupac. She’s crazy smart, and crazy talented with music. When Tupac made rude remarks about her family’s interracial marriage, she shot him down with an open letter, and they became friends. She’s also sang with Maroon 5, if Tupac wasn’t enough for you, and she directed Sara Bareilles’ music video for Brave. Rashida Jones is Ann Perkins if she had been born in Bel Air and had been discovered for acting. Enough said.

Let’s talk about Aziz. Oh my god I could talk forever about how Aziz is basically Tom Haverford and vice versa, and I will because this is my paper on how they’re all alike and so I’ll do it. They both come from South Carolina. Tom Haverford is rude and funny and a general mess, and Aziz is no different. Aziz talks so much he has a stand up comedy show about him, because that’s how much he has to talk. He talks about babies, about people, about marriage. The way Aziz talks is so Tom that it’s freaky. Note: Aziz Ansari: Buried Alive, when he asked the audience member if the breadsticks were unlimited, and please note: Tom Haverford when he asked Leslie if she still used mousse. “Oh my god Leslie, friend to friend, do you still use mousse?” Same. Exact. Tone. Not to mention, Aziz is all about the girls, and so is Tom. Aziz wears dope suits, and so does Tom. And since this is my article, I’m calling it, we’re done with Aziz, I can’t say anything more because that should be enough. Dope suits is all you needed. But in case you need more, let’s see Aziz talking about Chick-Fil-A being anti-gay marriage. And he says, “I’m pro gay marriage. But I’m also pro delicious chicken sandwiches.” This dilemma is something Tom would go through, were there no Leslie Knope pushing forth the agendas Pawnee needs to thrive. And Tom would probably also be pro delicious chicken sandwiches too.

Retta.I follow Retta on twitter. I follow Retta on twitter, and she tweets as much as Donna does in the show. She tweets about Scandal, which is her favorite show, and oh my god, also Donna’s favorite show. Whoaaa. It’s almost like they’re the same person??? Yeah, because they are. Retta is this goddess all about makeup and Scandal and livetweeting, and we know Donna loves her manicures and livetweeting (re: P&R episode regarding Death Canoe movies), and I follow Retta on twitter and watching her tweet Scandal live was insane. It sounded exactly like Donna’s tweets from the Death Canoe movies, except, y’know, about Scandal. I can’t talk about Retta and her big nasty firemen, because, like Donna, she probably uses a private twitter for that, like a woman with a good head on her shoulders would (re: Donna when Andy and Ann asked if she was pregnant). Like her offscreen personality, Donna is also very blunt, and she appreciates people being straightforward with her, and if you read Retta’s twitter bio, she says, “I’ve got an itchy block finger.” She will block you, and she doesn’t give two shits what you think. I love Rhetta.

April Ludgate is probably the only character (besides Leslie) that I ever loved from the beginning. She was so apathetic and rude and unapologetically herself that I loved her and wanted to be her. She gives nothing. Aubrey Plaza is someone I follow on twitter, and her twitter is like an April Ludgate fan twitter. Her tag is “evilhag”, she is rude to people who are rude to her, and she shows a general dislike for people, just like her television counterpart, April. When promoting her movie, Grumpy Cat’s Worst Christmas Ever, Aubrey would only answer tweets in Grumpy Cat memes that she would create. I cannot explain how many had the word fuck in them, because literally every meme had the word fuck in it.

Chris Pratt is Andy. Andy is really goofy and nice, and have you seen Chris Pratt? Lemme tell you something about Chris Pratt– he never uses a spit bucket. When you see him eating a cheeseburger on Parks and Recreation, please know he’s eaten like eight cheeseburgers. That has almost nothing to do with why Chris and Andy are the same– although I’ll bet you twelve cheeseburgers that whenever Johnny Karate eats a cheeseburger, Andy has eaten eight– but it was really about showing how Chris Pratt is a precious human who needs protection at all costs. Also, Chris Pratt is so confused by his own fame, and I feel like, in season seven of Parks and Rec, Andy Dwyer is just as confused by his own fame for Johnny Karate, but still goes along with it anyway. Also, Andy does totally eat eight cheeseburgers, don’t even try and fight it, and can we just talk about the beginning of Parks and Rec when they were canvassing, and so Leslie and Ann went to her house to get water, and they walked in on Chris and April and Mark singing My Own Worst Enemy by Lit. Always remember Chris Pratt. He is important.

Rob Lowe is Chris Traeger. Chris Traeger is really fit, and obviously Rob is too. But more than that, I feel like because of all the seasons of Parks and Rec, Rob was affected by Chris’s behavior, and so he probably does go running, and he probably does say literally every second, because honestly that word is so annoying but it literally is the best word ever. Anyway. Chris Traeger = Rob Lowe and I’m almost positive that Rob Lowe is Chris because Chris loves everybody and everything. Not to mention really polite. When Jimmy Kimmel’s mean tweets video featuring Rob Lowe happened, the tweet “Rob Lowe looks like skin cancer” only diminished Rob’s smile slightly, something we see happen on Parks and Rec when Chris is disappointed by his first bad date. Still smiling, just a little duller. And when his role in The Outsiders got cut to such a small amount of screen time, you know what he did? He didn’t get angry, he learned from it. He thinks it was a great experience because it taught him to be nice to people who have less screen time than previously thought; he said he always tells them before they see the final product– so they’re prepared– because he had to see the final movie to know that he got cut down. What an amazing man.

Jim is Jerry. I know he’s Jerry because I know almost nothing about Jim O’Heir.

Nick Offerman and Ron Swanson are the same. Ron Swanson is a hardcore libertarian who is about meat and woodworking. Nick Offerman’s woodworking has its own fricking website and good God, even though Nick Offerman is as on the grid as Ron Swanson wants to be off it, he is a concise and curt as Ron within every tweet, post, update, etc. Everything he says sounds like a line from Parks and Rec script, and that’s amazing to me– to be able to not only hear it in his voice, but actually wonder if it’s not scripted because it sounds so much like something on the show.

Oh, Ben-Benji-Benjamin Wyatt. Whatever are we going to do with you and your equally cute counterpart Adam Scott? Honest to God, the only difference between these two is the fact that Adam is slightly less nerdy, slightly more hipster. Also, Adam makes a few more faces “to the camera” than Ben does, showing how done he is with what’s happening. Take, for example, Jimmy Kimmel’s mean tweets featuring “Fuck Adam Scott”. The face Adam made right then and there after reading the tweet was worth someone ever even being rude to him because it was such a Ben Wyatt face that no one could resist laughing. Even further, because Ben Wyatt has that little bit of hipster in him, his clothes are what suffer for it, and if you’ve ever seen Adam Scott anywhere, he’s so nerdily hipster that you’d want to ask him out for some hot coffee (before it’s cool), and sit and talk about Stephen King. You just get the nerd vibe off him, because he is a total nerd. Check his twitter, y’all. I’m not kidding. 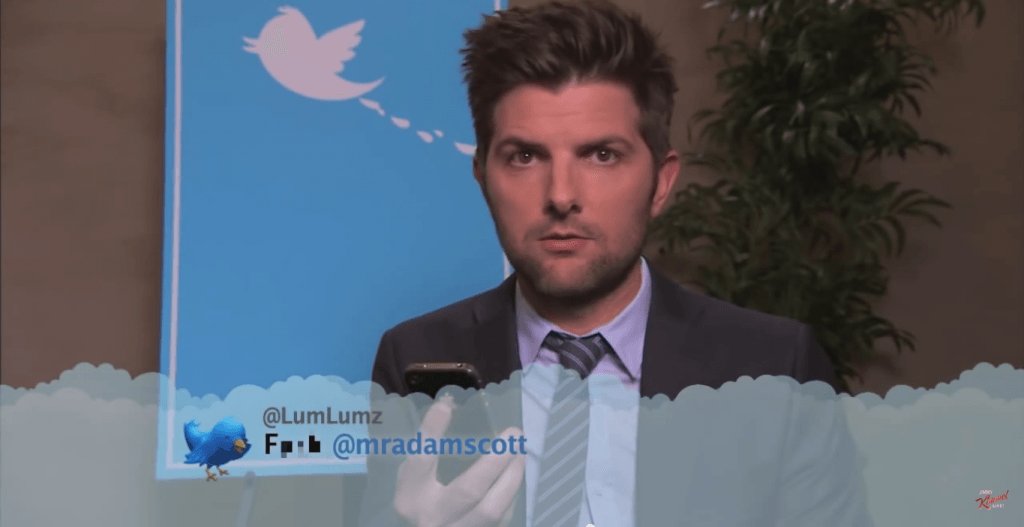 In short, the entire Parks & Recreation character list is their actor/actress counterpart. The entire show is literally riddled with facts about the characters, and those facts line up with the actors’. It’s a show filled with incredible characters from the incredible people playing them. So watch it. Right now. It’s on Netflix. Go. Seven seasons of pure, unadulterated joy are waiting for you. Come find me when you’re done.

Jackie is a college student trying to get rid of the french fry smell on her clothes and write stories that make people feel the things she's always felt. She hopes to become famous enough so her friend can eat the fancy bread they always have at award dinners. You can follow her daily life on Twitter @atragicthrill.