Posted On February 14, 2014 By Ryan Zwirner In Television

Roses Are Red. Violets Are Blue. Who Needs a Date, When There’s House of Cards Season Two?

The world we live in is a hectic and fast paced one. If you slow down you get left behind.  It can be easy to lose focus in this chaotic landscape of technology and politics. But with today being Valentine’s Day, it’s  important to think back to a simpler time; the laughter, tears, and countless hours you shared with your first love: Netflix.

Netflix in its Juvenile Years.

Do you remember the first time you met Netflix? Of course you do; it was young and ambitious, and was what all of your friends had been talking about. You were so impressed with how Netflix totally got you, as a person, in a way that only a DVD rental service can. Sure there was that childhood crush  you had on Blockbuster, but this was something different. 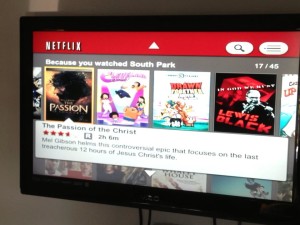 I wish my parents understood me the way you do Netflix

It started with that awkward puppy love stage, when you would wait at the mailbox every day for that red enveloped love letter of a DVD. As the both of you matured, you can remember that first time when you took things to the next level, and the mixed sensations of nervousness and excitement as you clumsily fumbled to stream your first online video together. It was that point, when your relationship had become discless, that you knew that what you had together was special.

Then there was your first fight, during that rebellious Qwikster phase. You felt hurt, betrayed, and vulnerable. You broke things off and said things that you didn’t really mean.  Eventually, Netflix saw the error of its ways, and, like the guilt ridden lover that it was, sent you all those emails full of apologies and promises of free trials begging to have you back.  Tears were shed, and trust was shattered.  Eventually the two of you reunited, but things were never quite the same after.

It’s like I don’t even know who you are anymore.

What followed was the post-get back together honeymoon phase.  Netflix went above and beyond, trying to make it up to you for all the pain that it had caused. Last year the company made the bold move of producing its own original programs, and a couch nestled you enjoyed seasons of quality programming  such as Orange is the New Black,  and Arrested Development. While some of its productions have been pretty forgettable, it’s important to remember this was a new step in your relationship, and there’s bound to be some bumps in the road. It’s the thought that counts.

But the appeal of those new shows could only last so long. After a while things got stale. You started noticing other streaming services. Hulu; which, back in college, had been dorky and weird with a bad case of ads, suddenly had grown into a charming Hulu Plus. That mysterious newcomer, Amazon On Demand, has caught your eye more than once. Then there were those times   where you snuck out and spent all night messing around with your friend’s HBO GO. You always end up coming back to Netflix, but the fire is gone. Film’s like Blackfish just aren’t enough to keep the passion going.

But Netflix is not going to let you go that easy.  It wants to let you know that it’s going to fight to keep you two together. That’s why for Valentine’s Day it gave you something more succulent than chocolate, more beautiful than flowers, more valuable than Jewelry, It gave you season 2 of the critically acclaimed and nine time Emmy nominated political drama House of Cards. Because you’re worth it dammit! And if that’s not love, I don’t know what is.

Seriously though, Season 2 of House of Cards is online. It has Kevin Spacey and Sean Penn’s ex-wife, and political backstabbing galore. It’s great, go watch it. All it takes is a click of this link. Frank Underwood: the poeticism of Shakespeare, the political scheming of Machiavelli, the accent of Foghorn Leghorn.