Posted On September 12, 2014 By Kelsey Darling In Dating For Women, Girlzone

Let me preface this by saying that I found myself wanting to perform a social experiment that I could write about and somehow I ended up here.  Internet Boyfriend.  Also, for those of you who know the sick and freaky world of the internet, let me tell you I was completely safe and made my boundaries very clear from the start.  Inspired by an unfortunate incident of phone-in-toilet and being a month away from an upgrade (which led to the temporary use of an old non-smart phone), I turned to Craigslist to fill the Tinder-less void in my heart.  I put out an ad.

I’d prefer if you had a man bun, but I’ll never know either way.

I received 36 unimpressive responses.  Most were lazy, faint-hearted expressions of interest, usually asking “What is a man bun?”  This cued me in to the possibility that many 50-year-old married men were responding to my ad.  Because who else is unfamiliar with the self-explanatory glory of a man bun? 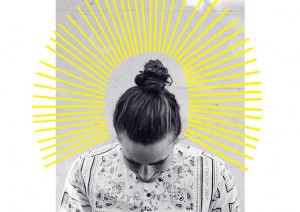 Whatever, I just wanted a human connection.  I began by giving everyone a shot, but quickly grew bored.  None of my potential boyfriends could be called a chatty Kathy.  Still, this was the internet, and I remained open to any and all possibilities.

I heard from a trucker, a ranch hand in Texas, a man with the last name Coolboy who accused me of being overweight and underconfident, and a self-described otaku (person obsessed with anime/manga). 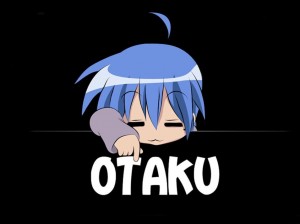 In the end, I wasn’t very fond of the guy who ended up being my internet boyfriend, but he just kept writing.  We made it official.  I adopted the identity of Hannah Greene–lover of cheetos, frisbee golf, and puppies.  His name was Europe Antarctica.  He was very pompous for an anonymous internet entity that claimed the name of two continents.

We struggled to DTR.  He seemed incredibly nonchalant, even when I forgot to respond for 5 days.  I expected a good internet boyfriend to be concerned, angry even–but Europe Antarctica thought it was a fun twist in this mind game we were playing.  I suspect he had multiple girlfriends on his side.

I refused to get invested, until in one e-mail he wrote, “This is the internet, we can do anything!  We could even be whales.”  Well, shoot.  He had hit on my number one fantasy–to be a whale.  Maybe he was a better boyfriend than I thought.  At this time I suggested that we become more intimate, not in the nudie sexy way, but in the maturing and fostering of a deep human connection way.  I asked him to tell me some secrets, to give me his trust and in doing so, to take our internet relationship to the next level. 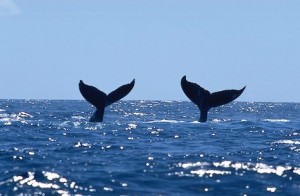 The secret he told me was that he was elusive.  This is the internet!!  Of all the possible things he could imagine up to say, the man who suggested we become whales should be able to muster up something better!  I’ve had strangers in bars reveal their encounter with statutory rape practically and my own online boyfriend could only put up walls.   How boring!  After investing my time and a small piece of my heart, it was time.  We had to break up.

“Sorry, I keep forgetting you’re here.,” I e-mailed him, “I think it’s because you’re not very interesting.  In fact, you’re boring.”  I wasn’t sure about the etiquette of breaking up with an online boyfriend, but I was 98% sure e-mail was the most ethical method. 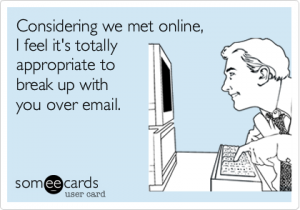 He responded with a very cheshire cat-like, “Perhaps it wasn’t meant to be.”  We were officially broken up, without even the option of post break-up facebook-stalking .