Posted On September 16, 2014 By Basic Becca In Dating For Women, Girlzone

I was home from college for Christmas and bored out of my mind, so I decided to start online dating and blogging about my experiences. That was in 2012. I made some profiles, went on some creepy dates, and became obsessed with tinder like everyone else. I began Tindering while in college to gain writing material and share laughs with my roommates. When I moved to New York about a year ago, I continued Tindering, and it got so weird, so fast.

In Texas, a majority of men are raised in a Christian household, and regardless of their religious upbringing, manners are of the utmost importance. Of course, most of them just wanted to get in some girl’s skinny jeans, but they at least put up a front that they wanted to get to know the Tinderess before sticking it in. Once in New York, I realized that manners were, for the most part, a thing of the past; I received several vomitous messages about what men wanted to do with my “big titties,” the size of the member they wanted to put inside me, and many requests for oral sex. I blocked those men. I also received messages that just said “hi” or “sup?” or “pretty.” So when I received a message about football- specifically RGIII, as I’m a Baylor alumna- I was so relieved and pleased.

Our conversation was mostly about sports and how my team, the San Francisco 49ers, was infinitely more talented than his team, the New York Giants. Still true to this day (sorry, Nick). After Tinder messaging, texting, and some phone calls, we decided to give real life dating a shot. He planned a really nice date at a restaurant where I would have to wear a dress and probably need to drink wine. At the last minute, I asked if we could just go to a bar and watch football (dream girl status, am I right?). So that’s how it happened. I met him at a bar, wearing minimal make up, a Niners t shirt, jeans, and Vans. We explored my three favorite food groups: beer, chicken tenders, and guacamole. Literally- this is the fasted way to my heart. He didn’t judge me on my eating habits (although I now know that he thinks I’m the loudest chewer ever), we watched football, and talked about life.

Fun dates followed including an MLS Red Bulls game where we drank pints of Sangria and, once again, indulged in chicken fingers and beer (we have moved on from Red Bulls and are now big fans of the team that doesn’t exist yet- New York City Football Club); he came to Long Island to see Freebirds with me and the kids I nanny; lots of dinners and bars (and chicken fingers). The first time I spent the night at his house, I farted in my sleep- he told me when I woke up, but at least he was still there.

Fast forward to now, almost one year later: he’s met most of my family, and they like him more than me; he’s dutch-ovened me on more than one occasion, we have matching Christmas sweaters, and we just moved in together. Yes, we get in fights like normal couples, and yes, sometimes we annoy the shit out of each other. He has awful taste in movies and believes that I have bad music taste. He likes baseball, and I have to order a family sized bucket of nuggets and fries to endure a Yankees game. 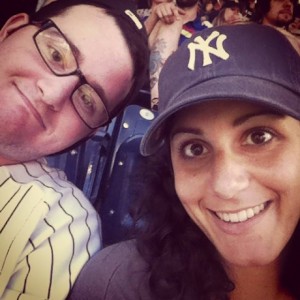 Thank you, Tinder, for helping me meet this totally awesome dude!