Posted On September 29, 2014 By Hunter Simmons In Movies

3 Reasons You Should See “The Skeleton Twins”

I have been complaining about the demise of Saturday Night Live for quite some time now. Many of my ilk will recall the “good old days,” when names like Will Ferrell, Cheri Oteri, Chris Kattan, and Tim Meadows (to name a few) became synonymous with laugh out loud humor. Today, unfortunately, the long-running show seems more occupied with making glaring political and social statements. Timid outrage aside, there were still some glimmers as the ship began to sink. Both Kristen Wiig and Bill Hader brought life to NBC’s floundering comedy troupe that it desperately needed. As could be expected, when Wiig and Hader meet again in lead roles on the big screen, they do not disappoint. Here are some reasons why you need to see this movie: 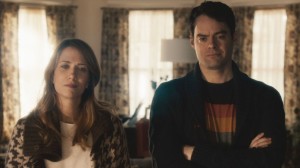 You might feel that a movie about depression and attempted suicide would have little wiggle room as far as humor is concerned, which begs the question: Why on earth were these two selected for these roles? Mark Heyman and Craig Johnson answer with a screenplay that reveals the extreme need for understanding (and humor) within the delicate balance of life and death. What Hader and Wiig did so well was more than make people laugh: they made each other laugh. That relationship is completely transparent throughout the film, and you really couldn’t ask for more from a brother-sister dynamic.

I do not feel as though I am completely qualified to make that statement. I have not been directly affected by depression in my life or the lives of my friends and family, but I have become certainly more knowledgeable. The passing of Robin Williams turned the spotlight away from the Middle East for a week and reminded us all about how powerful these problems can be. What is shown in this movie is gritty realism, even with the well-placed punchlines. If anyone has seen the movie and disagrees, I would love to hear your take.

3. This is a diamond in the rough.

Let’s be honest, 2014 has been a really crappy year for movies. There was a solid stretch of about a month where I could not find a single movie in the box office with a positive rating other than Guardians of the Galaxy. Now, all my friends in Hollywood are probably reeling after that comment, but this San Diego boy can only get access to so much. Skeletons may not have a very long shelf life this year. Get it while the getting’s good, and then you can pretend to be a film snob around your friends.

The movie is by no means perfect. Ty Burrell and Luke Wilson do well to support the leads, but throughout most of the movie I considered them more as a distraction. Heyman and Johnson could have ended the film in a number of ways, and I am not entirely sure they went in the right direction. I walked out of the movie theater feeling satisfied, but wanting more. If you are a closet-geriatric like myself, go pay for a Sunday matinee. You will not regret it.