Posted On May 10, 2014 By Mike Burleson In Miscellaneous, Politics

In yet another shocking, yet not-at-all-surprising move, our good ol’ pal and perfectly sane Führer, Vladimir Putin, has decided to take his totalitarian deathgrip on the Russian subcontinent one large squeeze further. Mulling it over for a solid couple minutes and passing it to a vote in the Russian Congress, if you can even call it that, made up of Czar Putin I, His Highness Putin, Vlad The Putin, and Vladimir Putin, Putin decided that the whole gay hate thing was simply not enough for him – hatred unless they are winning him gold medals, that is. The new legislation, effective July 1, will make it illegal to curse in film, books, the media, and even music (already released works will receive a warning label). Da. ILLEGAL. Violators will be subject to a mandatory nine rounds of bare-knuckle boxing with none other than the admirable Colonel Commie himself. The same guy that slays grizzlies with his bare hands. 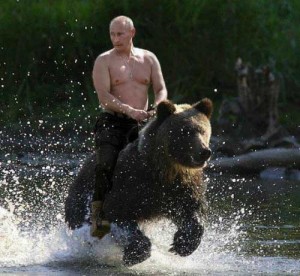 See this? This is what you’d be up against. Good luck, comrade.

But in all seriousness, breaking the new law will come with a hefty price tag. The figures, in USD, provided by Russian state news are as follows: $56-$70 for individuals, $112-$140 for state officials, and between $1,100 and $1,400 for businesses. Those figures are on a per-word basis, too, I assume. And just in case giving their mouths a good old-fashioned soap rinse fails in getting the message across, higher fines will greet repeat pottymouths.

Wow. Ickle Vladdiepoo has once again come through in the clutch with flying colors – not gay colors – and succeeded in splitting my sides while trying his darndest to look like a hardass. Of course I would never poke fun like this in his face, in fear of him going…ballistic… and putting his innate Russian insanity to work to destroy me in some sick, inevitably nuclear way. While moderately safe all the way in the western hemisphere, though, I can still piss my pants at the thought of him riding up on a bear with his shirt off and a swear jar to collect penance from anyone slipping into the insidious grasp of…GASP!!! Foul language.

At least his intentions are good. The man just wants to create a mature, sophisticated society where citizens do not need to rely on offensive obscenities to communicate with one another. This is really quite noble – if only it were true. President Pooter really wants nothing more from this law, besides additional government funding, which will almost certainly go straight into his own pocket, than to distance Russian society from those of the putrid West. He is so precious! Just like a 12-year-old going through the inevitable emo, Hot Topic phase, he is hell-bent on convincing the world that he and his nation really are cut from a different cloth and are therefore superior, though still like 50 years behind as a society. “What the crap, mom, I am different from those posers! I do whatever the H-E-double hockey sticks I want! But come flippin’ pick me up from the mall at 9:30!” Oh, and he’s not going to stick his nose into the creative processes of musicians, solely to bait them into swearing so he can swoop in with The Jar and a swift six-to-noon justice bone.

It will certainly be interesting to keep an eye on how this all plays out, the birth of a new nation of good, wholesome, and beautifully-censored entertainment. “Forget Tha Police” has an awfully nice ring to it, huh?