Posted On April 18, 2014 By Hilary Fitzgerald In Internet, The Scene

Last week as I sat down at work, I did the first thing we all do—check Facebook. It was then that I saw a link from two New York friends.

The site was StroudFunding. It was a cheerful looking thing, in blues, whites, and blacks, with the tagline “Changing the way Ian Stroud makes money.”

In 2009, the current popular crowdfunding platform, Kickstarter, hit the streets of the internet. Soon, film students across the country would be sending the link of their Kickstarter campaign to every living relative.

And it’s a nice idea, really—making art from a communal effort—but like most gems, it works until everyone knows of its existence. Like YouTube, or whatever content site you freeload off of, Kickstarter is now inundated with projects from sunglass strings to feature films. Once you have people like Zach Braff and the creators of Veronica Mars utilizing it, you know it’s over for the lil’ folks.

So Ian Stroud had an idea. He bypassed the giant and made his own personal crowdfunding site with the first project: “Retroactively Pay Me For Content I Willingly Created.”

Stroud moved to New York four years ago, where he quickly joined the Upright Citizens Brigade community, honing his skills as a comedian, writer and director. But as most artists, his passion isn’t where he draws the bulk of his income. That comes from his professional photography and videography.

Through the years Stroud has continued to “willingly create” entertainment for you, the consumer. Series include The Rationals, Literally Saying, Pair of Pairs, and Roommates Making a Web Series About Roommates Living in New Work City: The Web Series.

And don’t let me forget The Spirit of Adventure, a comedy group Stroud is a member of, with the tagline “11 comedians from NYC travel to one location, to create comedy in 24 hours.” Their finest piece may be “Frolickers,” directed by Stroud, while of course being comedic, exemplifies Stroud’s strong, honest, and self aware voice (see: Honest Facebook Lookback).

On a Wednesday Ian Stroud and Hilary Fitzgerald both sat in front of their computers to have a chat about StroudFunding, among other things. The following is the result of a two-hour Twitter conversation.

For starters, Hello @STROUDFUNDING! And welcome
to Twitter on this fine afternoon!

@FITZYCAMPBELL: Thanks for taking the time!

@STROUDFUNDING: Here’s a fun challenge, can you
tell me about your day in 140 characters or less?
I suppose emojis would be more helpful.

@FITZYCAMPBELL: Went to bed around 4AM, up
at 1PM. Worked on a script. Talked to my family.
Have a rehearsal later tonight until about 1.

@STROUDFUNDING: You did it! Congratulations
on being a full-functioning human being of the
21st Century.

@STROUDFUNDING: Can I ask what you are
rehearsing tonight?

@STROUDFUNDING: Well that’s great. So
we’ve established you’re a comedian. What
other categories do you place yourself in?

@FITZYCAMPBELL: I am a content creator and
photo/video guy as well. I’m lucky enough
to be able to create my own content for myself.

@STROUDFUNDING: Ain’t it the truth! I
can’t imagine being a content creator before
the home video outbreak.

@FITZYCAMPBELL: I have vivid memories
of filming to VHS-C and editing on my
VCR at home for school projects.

Which brings us to the reason I
contacted you! Can you tell everyone
what @STROUDFUNDING is?

@STROUDFUNDING: When I saw this online,
thanks to @KMolloys, I laughed then had a
sudden urge to high-five you. What’s the
response so far?

@FITZYCAMPBELL: High five! Only a few
days since launch and I have a few donations
already. I feel very supported and encouraged.

@STROUDFUNDING: Let’s go back in time,
when did you start making free art? (All
art isn’t free, kiddies!)

@FITZYCAMPBELL: Most of my life, but
I think the stuff that wasn’t objectively
terrible began about 4 years ago,
after I moved to NYTC.

@STROUDFUNDING: Was that the same
time you started at UCB East?

@FITZYCAMPBELL: Yes, when I moved
to the City I immediately wanted to be a part of
the UCB community. It’s the place to be!

@STROUDFUNDING: I felt the same way
when I moved to LA. A good community
may be the most important aspect of
art-making.

@FITZYCAMPBELL: I’m surrounded by talented actors,
writers, and directors who just want to create.
StroudFunding is impossible without them.

@STROUDFUNDING: Crowdsourcing
seems to be the only answer as of late.
Do you remember your thoughts about
YouTube when it first came out?

@FITZYCAMPBELL: At first YouTube was the wild west.
Quality was low, there were limits. Now it creates
stars and diminishes gatekeepers.

@STROUDFUNDING: That’s actually great.
I was going to ask if you felt content creators
have been hurt more than helped by “the internet”

@FITZYCAMPBELL: That’s the basic attitude of
the web I think. AIM was free. Hulu is free*.
You don’t appreciate costs until you bear them.

@STROUDFUNDING: That brings up a good
point, do you think general audiences are
aware of the costs of productions like the
series you make?

@FITZYCAMPBELL: Cameras are now amazing AND
cheap. That’s how I’m able to enter the game
at all and why so many new players are at the party.

@STROUDFUNDING: But do you feel that
maybe too many players are at the party?
With easy access the world is no inundated
with “content”

@FITZYCAMPBELL: It totally feels like too many
but how can I fault someone with a vision?
I’m no different. The cream tends to rise. Mostly.

@STROUDFUNDING: A filmmaker last
week told me there should be licenses to
make movies. His friend responded,
that would have kept you out.

@FITZYCAMPBELL: Same here. I try to watch
everything my peers put out. I see those
who stick with it improve every week.
Hopefully I do too.

@STROUDFUNDING: After watching
everything on your website. I can now
attest to your continued improvement.

@FITZYCAMPBELL: Thanks! You accept Venmo
for bribes right? I’m flush with Stroudfunding cash
so it’s no biggie.

@STROUDFUNDING: Another “looking back”
questions. Do you remember the first time
you heard about Kickstarter?

@FITZYCAMPBELL: First time I was on my radar http://goo.gl/j8dgFk .
Tangibles are great there. Intangibles can be
more gray than b&w.

@STROUDFUNDING: Have you ever funded
a (intangible) project on Kickstarter?

@FITZYCAMPBELL: Not yet. Maybe if the right one
comes along.

@STROUDFUNDING: It is in my opinion that
Kickstarter’s prime has passed. What’s your
reaction to such a statement?

@FITZYCAMPBELL: Each new campaign I get a
MailChimp blast from, it gets more difficult to sift
through. I think peak Kickstarter may be here.

Which of course means it’s the perfect time
for @STROUDFUNDING, and I’m not being sarcastic.
You never can tell on Twitter.

@FITZYCAMPBELL: It felt like the right time
to strike. I intend to create a new campaign
every month.I have lots of ideas!

@STROUDFUNDING: That’s great! Best
to do it before everyone starts copying you,
right? I mean I’m making CampbellFunding
right now. #notsoup

@FITZYCAMPBELL: Sincerest form of flattery.
Also, I’ll get right on creating the StroudFunding
campaign to help you build it.

@STROUDFUNDING: Stronger together!
Synergy, I think that’s what they say…
Does StroudFunding offer benefits to
backers like Kickstarter?

@FITZYCAMPBELL: Absolutely! Each campaign
has custom benefits to backers. You
can see the first ones here: goo.gl/ImMTtF

@STROUDFUNDING: Dinner!!! I’ll empty
my funds now. I know your time is limited
so I’ll end with this. What’s your favorite
shirt you own? 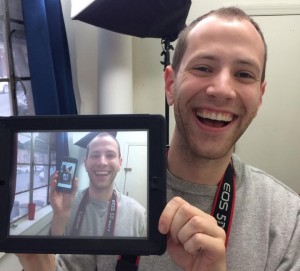 Stroud never goes for the shock factor. He isn’t trying to constantly win you over. He’s simply a good writer, director, and content creator. With StroudFunding, he’s asking those of us who appreciate him to continue to support his work. Maybe it will work, maybe it won’t, but it’s certainly different from the rest.

Kickstarter would never accept a project of this nature and Stroud recognizes this (in fact, the project was declined). He is not using smoke and mirrors; attempting to convince you of the great work he could do if he had your dollar. StroudFunding is straight-forward; It says, this is what I did, so maybe you should pay me so I can keep doing that.

Want to view this conversation on Twitter? Go here.