Posted On May 8, 2014 By Hilary Fitzgerald In Food and Drink For Women, Girlzone

It was Senior year of college. I was stressed, but we were all stressed. I’d like to say I was more stressed than you were, but who am I to say such a thing?

What I’m saying is I was stressed. And even more, I was getting fatter. It was terrible. I lived on the beach, but the thought of a bathing suit gave me more anxiety than the amount of shopping debt I’d gotten myself into. (I’m always in shopping debt and now Chase keeps calling trying to offer me more credit cards, have they lost their minds?)

So, as it always goes with me, I got into the habit of exercising, again. I’ve never been in shape. I will never be in shape. I go through roughly 3 month periods where I think I’m going to get my life together, but it’s quickly followed be a longer period of being self destructive, i.e. avoiding the grocery store, convincing myself I’m actually saving money by eating gourmet grilled cheeses, drinking vanilla lattes every day, wearing my hair in a ponytail indefinitely, not shaving my legs, mixing alcohols, considering walking to my car a decent workout, picking at my face, eating popcorn every single day, and constantly searching for some sort of entertainment that will make me cry.

But the exercising wasn’t doing a thing. Not one thing, I tell you. It was a mystery. I was barely eating. (When I go through my 3 month cycles, I’m on the verge of anorexia. Not really, but sort of, but not really).

Meanwhile, I had found a delicious drink at my favorite coffee shop, Caje, in Isla Vista. The Ice Blended Coffee. An absolute treat. And it was just coffee! I was struggling to get to class on the daily, and this, well this was the greatest drink to ever happen to me.

The ingredients? Coffee, ice, and ice milk. So harmless.

I had at least one a day. Large ones. Sometimes two, if someone on my festival committee failed me and I had to pick up the slack.

And I was running. I was doing things. I was swimming laps. Walking all the time. These were activities more than running to my car! Yet, the scale was showing no difference.

One day I was waiting in Caje for my Ice Blended Coffee when I peaked over the tall counter to watch them whip together my drink of sanity. Just then I saw it happened. They scooped ICE CREAM INTO THE BLENDER. ICE CREAM. I HAD BEEN DRINKING A MILKSHAKE A DAY FOR MONTHS.

Ice milk, you guys. Ice milk. It isn’t milk on ice, or whatever you want to tell yourself it is. It’s ice cream. The term “ice milk” should be illegal. It’s omitting the truth from the public. It’s a terrible wrong doing.

No wonder I was a cow.

I’ve never had an Ice Blended Coffee from Caje since (lie!) and now when I hear people ordering them at that beautiful Caje counter I want to scream, “Do you know what you’re doing! I don’t think you do! Do you realize what ice milk is! There’s no way you could know! And it isn’t even your fault! THEY’RE OMITTING THE TRUTH!”

I can’t order ice blended coffees from anywhere else. Why? Because they don’t taste as good.

They don’t have ice cream in them.

Isn’t that so terribly tragic?

Here are Instagrams from people who probably didn’t know they were drinking milkshakes. 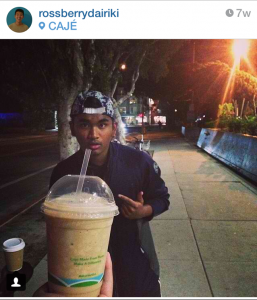 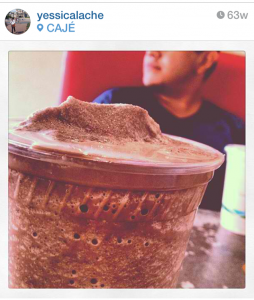