Posted On February 20, 2014 By John O'Neill In Miscellaneous, Rants

This year, my New Year’s Resolution was to try to be more patient with people and more understanding of little things that shouldn’t frustrate me. Friends and family are always telling me to slow down and take a breath. Truth is, I tried and continue to try. But sometimes it’s completely alright to just lose it, throw the bird, pass on a double yellow, or skip your iPhone across a lake. For instance…

8.  Drivers going well under the speed limit on a single lane road

When you are in a hurry, or even when you aren’t in a hurry, slow drivers are the plague of earth. Going the speed limit, or even a touch under the speed limit, might be frustrating in the culture of “5 over” but it is understandable and tolerable. However, if you’re cruising down the road at 35 in a 50, you deserve every bit of the middle finger you get as someone else with a life blows by you on the double yellow.

Going 15 under the speed limit? You deserve this.

7. When the zipper on your jacket splits/break

The worst part is that your zipper will now never be the same. You might have to use a pair of plyers to rip it back down the track and it might zip properly on the next go. But, lo and behold, later in the day or even as late as next week that zipper is going to break again.

6. When you can’t find your car keys

Seriously, your car is right out front and it didn’t just appear there. You drove that bitch home and then did something with your keys. You check all your usual spots: end table? Not there. Dresser? Not there. Counter? Not there. Eventually you’ll be late to work, pissed off and convinced that your roommate stole them out of spite. Eventually, though, you’ll find them, remember putting them in some obscure location, and refuse to admit to your roommate that you made a mistake in calling him a thief and a liar. 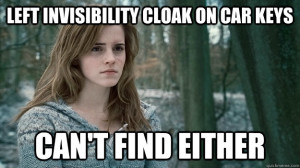 5.When Netflix/YouTube pauses to reload EVERY 30 SECONDS

Ain’t nobody got time for this. If you get a reload screen and pause it to allow for some buffering, that video better damn well play smoothly until the end. The spinning wheel might as well be an insult to your valuable time.

The buffering wheel of infuriation.

4. iPhone group texts when you have shit to do

*Editor’s Note: Ascher likes to crush his staff’s morale to encourage discipline. Group texts are the best way to do this.

3. When someone consistently misuses the Their, There, and They’re

We all went to elementary school, we all make mistakes. But, seriously, GTFO if you continue to use “there” for all references of place, possession, people, and being. The same goes for it’s and its, where and were (which aren’t even phonetically similar!), bye and by, to and too, and so forth. Buy a grammar book and then beat people who do this over the head with it.

Just toss your napkin and leave the table. That $50 sweater you just bought or those awesome jeans that your girlfriend gave you for Christmas are now ruined. That stain is never coming out. The quarter size stain is noticeable to everyone, and despite being less than 1% of the surface area of the garment, you now have to throw it out. Feel free to slam the garbage lid a little harder. Even worse: when someone else spills something on your new clothes.

1. THE WORST: When you get disconnected during a call that was first routed through an automated service

First, you had a small problem with your phone, now you have a broken phone because when the line went dead after waiting 45 minutes to talk to someone, you threw it as hard as you could against a wall. There is no shame and most anyone would forgive you. But after pressing 1, 7, 4, 2, 37, and a hundred other  combinations of menus you finally reach “Eric” in India who has no idea to how to help you. Just as you are about to get a manager, the line cuts, your vision goes white with rage and there isn’t a goddamn thing you can do about it.