Posted On April 2, 2014 By Allyson Darling In Dating For Women, Girlzone

He’s Just Not That Into You

I laughed with girlfriends over drinks in regard to the female phenomenon of making excuses for the guys we date.  We admitted to how pathetic we could be, constructing covers for their lack of communication and attention, “He just has had a really busy week,”  “He is just scared of how much he likes me.”  We discussed these delusions that we make up in our minds in response to a text that takes less time to type and send than it does to fart.  I am fatigued from generating the reassurance that only perpetuates this mindset.  This cycle is not worth another margarita or minute of conversation:  Sometimes, he’s just not that into you!  You don’t have to take what you can get.  It may be difficult to accept, but he doesn’t like you if:

He isn’t too busy; you’re just not a priority.  Everyone has a life to balance (unless you’re naturally attracted to reclusive shut-ins ,and if that is the case, you may have bigger problems).  If you like someone you want to see them – even if you just started a new job, even if you’re running a marathon, even if your Dad needs help with his car.  Everyone has to at least eat, you know?

A text, the puniest form of communication, can be generated in the time it takes to ride an elevator a few floors. No seriously, try it. I have yet to meet a twenty-something that isn’t on their phone for at least three minutes a day (unless of course they are a hermit with hemorrhoids, and again, there are bigger problems to address there).  I know, you’re thinking about how he just doesn’t really like texting, and that his job is really demanding and he gets in “the zone.”  Darling, the only game you’re playing here is with yourself.  You’re better off buying a vibrator than waiting for your phone to vibrate until you meet a man who contacts you when he says he will. 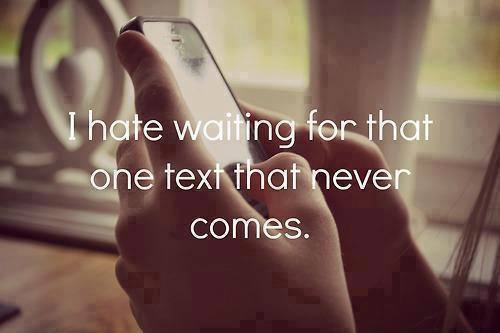 If that text never comes, or takes more than a few hours to come, move on.

After hours, as in, it’s too late for anything to be open except your bedroom and the 24 hour drive-through at Taco Bell.  It might seem like the best idea when you’ve returned from a night out and you’re faced with your recently rearranged room that now allows ample space for activities.  However, you could just eat a snack and sleep in the middle of your bed instead of getting humped by whiskey-struck junk that feels like being nudged by a limp piece of spaghetti. 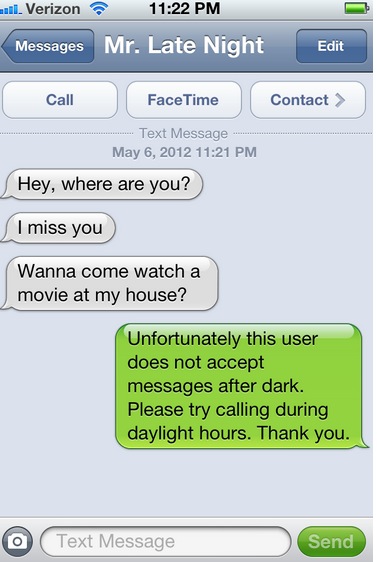 Mr. Not That Into You.

He wants to concentrate on his career so he can really only see you two nights a week after 10pm, he has a friend visiting and then he is going out of town, and then volunteering in Ethiopia, so he can’t seriously get involved with you and risk liking you too much. He was infected with a rare strain of adult chicken pox that has resulted in his inexplicable ability to receive only in the bedroom, he has been trying to break up with his girlfriend for weeks now and he is just really confused and this is all triggering for him because it reminds him of the time his mother slapped him in a Chuck E. Cheese as a child.  The truth is that if a person likes you it is simple:  You will know.

It really shouldn’t be.