Posted On March 6, 2014 By Hilary Fitzgerald In Girlzone, Issues, Miscellaneous

They Put the American in American Girl Doll

When I began to talk to, well, anyone who would talk to me about their American Girl Dolls, there was one common theme among women—not the wealth of American history obtained from their 18-inch-tall childhood friends, but the response, “No I didn’t have (insert blonde doll’s name), she was a b*tch, I had (insert different doll’s name), the cool one.”

Which brings me to my question, why the hell did my mom buy me an American Girl Doll? 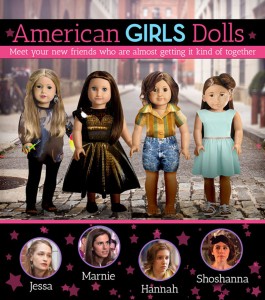 This is so true, it’s scary.

The original American Girls—Samantha, Kirsten, and Molly—arrived on the market in 1986 from a group ironically titled the Pleasant Company. The world of dolls has never been and will never be pleasant. It’s vicious, it’s vindictive, it might as well be Mean Girls.

Each doll was from a different decade in American history, each arriving in the mail with a self-titled book detailing her personal story of struggle, each costing $80 for the basics ($110 today).

When I think back to my American Girl Doll (Samantha), I don’t remember what her story was. I only remember that she was pretty and had accessories. Once I knew she could have more things, I wanted more things. I needed more things. More accessories, Mom. Mom. Now, Mom. Mom, why aren’t you listening to me? Elaine’s doll has horses. Why can’t I have horses? I need horses. Mom. Mom. Mom! Dad?

I read on Wikipedia that my doll, Samantha Parkington, was an only child in the Victorian period who lived with her wealthy grandmother to whom she referred to as Grandmary. Samantha was a friend to a servant girl named Nelly, who was eventually adopted by her Aunt Cornelia. The themes of her books included “women’s suffrage, child labor, and classism.” Interesting.

Here’s what I remember.

So much for American history.

My eldest sister owned Kirsten. Kirsten was, apparently, a Swedish immigrant now living in Minnesota and having a hard time adjusting to American life, particularly learning English. Why did my sister want Kristen? “I think that’s why I liked her, because she was on the farm, not like Samantha.” My sister received her doll in 1989. She remembers that she wanted Kirsten for Christmas but before the holiday she was rummaging through our Mother’s closet and came upon the doll, finally settling with the fact that Santa Claus did not exist. Mom bought the doll, not Santa.

And there you have it, the core of the American Girl Doll—teaching little girls to be good American consumers. 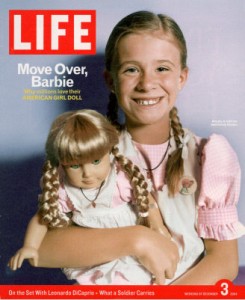 Is there anything more American than LIFE Magazine? Well probably, but that’s not the point.

My sister, as most firstborns do, had the struggle of wanting all of the accessories for her doll, but receiving handmade gifts instead – like the wooden bed our Grandpa made for her. “I think it was too expensive.” By the time I came around, I simply asked and received whatever I could guilt trip my parents into. (After four kids, parents are tired. It’s just the truth). Except for that bed. I didn’t have a bed for Samantha. I needed that wooden bed but it sat so far out of reach for me (you know, the top shelf of the closet….couldn’t reach it).

But if I couldn’t have that bed, I could have something else. Little girls’ obsession with dolls is often explained through a psychology of mothering, but I deny that; this had nothing to do with my wanting to be a mother. This was about my being an American. I wanted things. All the things. Why? Because other girls did. Because my sister did. Elaine had Samantha. Liz had Kit. Allison had Kirsten and Josefina. If I didn’t have these things, there had to be something wrong with me. But don’t worry, nothing was wrong with me; I eventually racked up bags filled with American Girl accessories, specifically: roller blades, elbow pads, a backpack, a cast, a gradebook (where I gave her all high marks), many outfits, a coin purse, a brush, and who knows what else. (On a side note, if I wanted to be a good mom why did I rip out my sister’s doll’s leg and hide it for years? That’s not good parenting. That’s 2nd degree murder).

“It’s a lifestyle for the kids and the parents. The psychology of the whole thing…it’s the sophisticated Barbie doll,” said a father of two girls.

The American Girl catalog arrived what seemed like weekly. Elaine referred to it as People Magazine in her house. Erin and her sister Emma would fight over who could read through it first to circle which items they wanted. “Except both of our initials were E.E. so…that was a problem.” They fought to the point that their mother was forced order two subscriptions to be delivered, to keep peace in the house.

As young girls, we were building a world of miniature things that we could eventually have for ourselves, and the American Girl line made sure to follow up with the desires they planted. Not only could you purchase a brand new dress for your doll, you could own a matching one for yourself. “Oh yeah we had matching nightgowns for the dolls,” remarked Elaine, “and Samantha had a bed next to my bed.” Erin remembers, “I liked [Samantha’s] dress, so I got a matching maroon dress.” Erin and her sister even attended an American Girl Tea Party in San Francisco where everyone’s doll had their own miniature chair and tea cup to enjoy. As we grew up, the catalog offered more and more. My room was filled with everything and anything with American Girl logo. And then came the American Girl Magazine, which I don’t remember, but don’t doubt subscribing to. Today, a one year subscription costs more than that of Vanity Fair. There must be some pretty amazing articles in there.

I called my Mom last night and asked her whether she remembers the purchasing of such an expensive doll. “What! I never spent that much money on any doll.” Well you must’ve, Mom. “Well…I don’t remember… I know I kept them and now she (my sister) hates them. It’ s over the top. Not something I would normally do. It would have been a splurge.”

So she admits it. She spent the money on the dolls. I want to say I can’t believe it, but I can. Kids have convinced their parents to do much worse, I just know it.

One article informed me that a trip to the American Girl store in New York City could easily rack up a bill of over $600. Easily! For a group of dolls trying to exemplify American history, a bill that steep is not something accessible to the average family, but I suppose that’s the point. That’s what makes it American. If my doll can be this beautiful and have this many accessories, maybe one day I can too. That way, I’ll be so much better than that other girl at school, the one who has Felicity…she’s a real b*tch.

For anyone reading this who either doesn’t want to believe me or didn’t have an American Girl Doll, just do a basic Google search and you’ll find plenty of articles, blog posts, comments about the American Girl as a popularity contest, a symbol of class and status quo. Or ask a friend. They’ll probably respond like this girl, “Whoever you had said so much about you, it was practically a cult. Molly was the worst…I always felt bad for girls with Molly.” My personal favorite is this article from the Hairpin detailing the future of your life based on which doll you owned.

Maybe you’re not like me and you actually learned about the Great Depression through your doll (Erin).  I didn’t learn a thing about history from Samantha. I learned how to be a good consumer through jealousy and demand…Which is probably why my Mom bought me the doll and doesn’t remember it. She wasn’t thinking about the effects it would have on my life, she was trying to get me to shut up. I demanded a lot of things as a little girl. Didn’t we all? (I’ll take another Diet Coke. Now.)

When I asked my friends, “and, if you ever had a daughter begging for an American Girl Doll, would you buy her one?” I received many long sighs followed by a “yes…probably.”

Today I’m a living and breathing shopaholic. Did the American Girl do this to me? Did my Mom do this to me? We may never know…Except that we totally know.